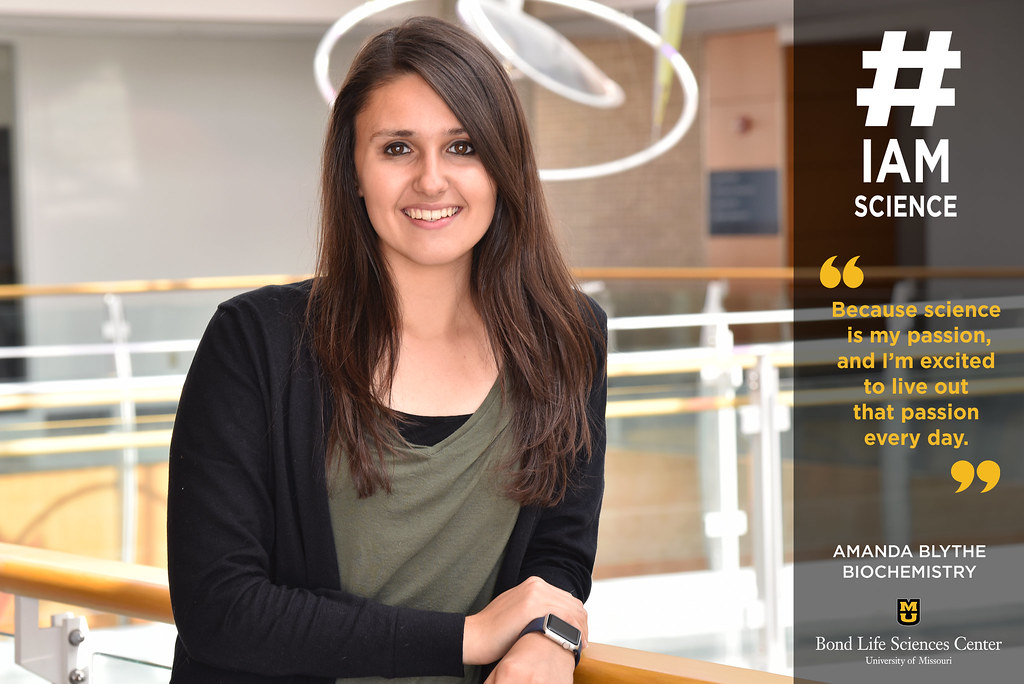 You could credit a high school career fair to Amanda Blythe’s early success or simply luck.

Either way, Blythe was younger than most when her research was first published.

“I found a program at Washington University over the summer before my senior year of high school,” Blythe said. “They gave me a research project at the med school focusing on a rare genetic bone disorder. I did a lot of genetic sequencing looking for mutations, which led me to discovering a novel mutation, and we ended up publishing the data. It was a rare, lucky find.”

This find launched Blythe’s beginnings in the world of science.

“At first I didn’t realize how big it was. They included me on the entire review process, most of which I didn’t understand,” Blythe said. “When I told my mom, she seemed to indicate that it was a big deal, but I still did not completely understand the hype. The more people I told, the more I began to realize how great an honor it was. I felt really humbled. I was a summer student and I was only in high school. There were so many people helping me get on this path, it was surreal.”

“I showed her my resume, and she just kind of looked at it and asked, ‘How did this happen?’” Blythe said. “She was surprised, I told her how it was about being at the right place at the right time, and she was very impressed. It meant a lot coming from someone with that stature in science.”

Blythe is going on her fourth year in the lab. Currently, she works with specific corn mutants to better understand how to increase crop yield.

“Our lab is really focused on corn development — how it develops and what genes are behind that development,” Blythe said. “In order to do that we look at specific corn mutants. Each mutant will have a specific defect, and by understanding these defects we can better understand the function of important genes for proper development.”

Blythe has narrowed in on a mutant called Suppressor of Sessile Spikelet 3 (Sos3), which produces single instead of the normal paired spikelets. When you look at an Sos3 ear, you can see the gaps between the rows of kernels. Blythe is trying to identify the gene that produces paired spikelets in corn, which could lead to higher yield in other grasses such as rice and wheat.

Blythe sees the importance in creating high yield, but she doesn’t see herself doing plant research for the rest of her life. Blythe pictures herself in pharmaceutical research.

“I love my corn research, but I discovered the long-term end goal wasn’t my passion,” Blythe said. “I found that while writing certain project proposals that I was trying to link my project to public health. My PI even noticed and said I should link the two. So I tried it and discovered disease prevention was my true passion.”

Blythe’s fire for research won’t be burning out anytime soon, and her next published article could be in corn or pharmaceutical research, or even both.

“You know how some people get so excited for their goals? Research has become such a passion and goal for me,” Blythe said. “I have found something I get enjoyment from. From the tight-knit scientific community that I have to the experiences to getting new results, all of it continues to drive me every day.”