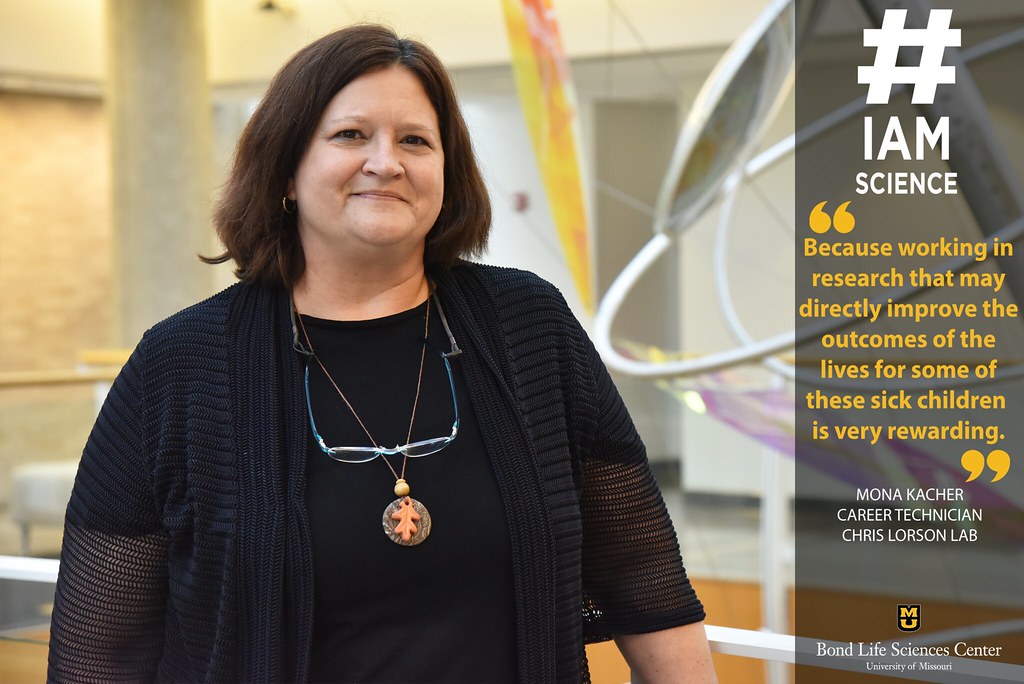 Years ago, when career technician Mona Kacher was still in school, her science teacher asked their students who wanted to dissect a salamander first. Some students were hesitant, others excited, but no one more excited than Kacher who had already raised her hand.

Originally, Kacher was a medical technician in an Army hospital lab. However, when she left the Army, she was encouraged by her then father-in-law to apply for a senior research position at Dalton Cardiovascular Research Center. There, the lab manager asked if she knew anything about the chemistry analyzer they had just bought.

She knew it inside and out.

“So, that started an unintentional career in research, and I’ve stayed with it ever since,” Kacher said.

In her 31 years at Mizzou, Kacher has been bouncing around campus as a senior technician and research specialist working in various labs and disciplines.

“As you know, PIs sometimes lose their funding or funding comes and goes,” Kacher said. “So, I’ve had to piece together a career on campus, moving around a little bit.”

Kacher has worked in oncology, veterinary pathobiology, diabetes, hypertension, Lyme disease, HIV-AIDS and malaria research. She has been listed as a co-author of 20 scientific manuscripts that also include her data.

“Mona’s wide variety of disciplines that she has been exposed to throughout her career absolutely helps strengthen the Lorson lab,” said Chris Lorson, principal investigator at Bond Life Sciences Center. “She is able to draw on techniques she has performed in the past and apply them to various research needs.”

Kacher has been at the Chris Lorson lab at BLSC for the past two years. She’s the only technician there, so she assists others and helps teach methods and procedures to graduate and undergraduate students. Kacher also maintains five mice colonies for Lorson’s gene therapy work regarding Spinal Muscle Atrophy (SMA).

SMA is a genetic disorder that occurs in children missing the survival motor neuron-one gene. The disorder is the leading genetic cause of infantile death worldwide and causes muscle weakness, respiratory failure and premature death.

“SMA has likely affected members of my own family,” Kacher said. “It’s a very sad situation for a lot of families, and working in research that may directly improve the outcomes of the lives for some of these little sick children is very rewarding.”

Kacher is currently working on projects that test treatment methods for SMA and other neurodegenerative diseases. In these projects, infant mice the size of gummy bears receive a spinal injection with the treatment. Spinal injections are also involved in some projects.

“She is focused and hard-working,” Lorson said. “She understands the need for flexibility in the world of research and will persevere until the task is completed. She has a wonderfully positive attitude and a genuine concern for the well-being of those around her.”

Similar to how her research reaches a range of disciplines, her interests are just as varied.

Kacher and her wife started a business named, Shivers Shaved Ice and Shivers Coffee & Donuts in 2017. They owned it for several years until Kacher went back to MU.

In addition, Kacher likes to make jewelry and art. She also plays guitar and used to sing at weddings and in the Columbia Chorale. She still sings with MU’s Choral Union.

All of this creativity seeps into BLSC where she has colorful toys on her desk and a rainbow of organizers on lab shelves.

With so many positions across campus, Kacher believes this one will be her last. She plans on retiring in a few years.

“I enjoy a lot of variety in life,” Kacher said. “So, being able to contribute data and small pieces of information in this field or that field, knowing that all the little pieces together are what makes a cure or moves scientists into the next direction for studying that disease or that condition is very rewarding.”