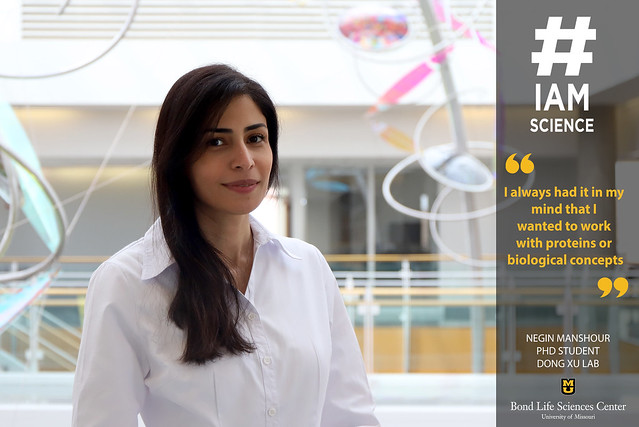 “I always had it in my mind that I wanted to work with proteins or biological concepts,” Manshour said.

Manshour, a second year Ph.D. student in the Dong Xu lab at Bond LSC investigates formation and structures of certain molecules. She uses machine learning to design peptides, small chains of amino acids which combine into proteins – building blocks for cells – that can serve as messengers or mimic substances that regulate processes in the body. They are often used in drug therapies across the medical spectrum.

“I cannot say which [field] is more valuable, but this project is related directly to human lives. So maybe it’s more precious to me, more valuable to me,” Manshour said.

Manshour always had a knack for numbers.

“In my high school, I was always in the top ranks of students because of my grades in mathematics or physics. Because of that, some of my teachers guided me to go to engineering. In Iran, electrical engineering is one of the best majors in our country,” Manshour said.

Manshour went from electrical engineering to mechatronics, a field that mixes mechanics, electronics and computing. The collaborative nature of mechatronics drew Manshour to it for her master’s.

“If you just have a view to the mechanical engineering of biomedical science, and you just purely work on that, that’s valuable. But we need some scientist to connect the science together. In connection, we can create something new,” Manshour said.

Manshour stepped into biology research for the first time through a robotics project during her master’s studies where she used robotic algorithms to simulate protein structure and calculate how proteins’ workspace changes based on its inner backbone’s angles.

“This was the first time that I faced biological concepts, and it was very amazing to me,” Manshour said.

The only problem was Manshour knew very little about biology.

So, she taught herself the basics of protein chains and molecular binding through biochemistry textbooks. Seeing her hard work, some of her professors recommended she pursue a Ph.D. Instead, she seized the opportunity to work on research and development of elevator systems.

“I needed to see the results of my research,” Manshour said.

She applied her engineering skills in industry for nine years before she decided to return to academia. Although some argued that Manshour should stick with her career, she knew she needed to pursue her passion.

“That was a difficult decision for me to make because I had my own comfort zone. I had everything that I wanted, but I had to change my path and go to a new area”

She left her job and the safety of her home country and came to the United States to study computational biology at Mizzou, where she continues to tackle problems with skills she picked up in her past work.

“I think that challenge has prepared me to be more professional to solve projects that are completely new to me.”

Manshour retains her connection to her family and home country despite the amount of time she spends in the United States.

“My parents and my siblings are my best friends,” Manshour said. “My parents are from a previous generation, but they can talk with me in every problem that I have.”

Now entrenched in biology research every day, Manshour finds a renewed fascination with the natural specificity of biological systems.

Cutting into CRISPR: Walking through the process driving plant research

Gene-editing is the pinnacle of a biologist’s toolbox, but often left unexplained it seems more magic than science.

Growing rice from a small cluster of cells to 4-foot stalks can take six-months or more of planning and careful nurture. But how do scientists change the intricate genetic material in each cell of the plants?

“CRISPR is relatively new. It’s like 10 years old only and still we are working to modify it and improve it in plants,” Gupta said.

The process starts with a few cells from seeds capable of maturing into any type of cell to form a cell cluster, known as a callus. 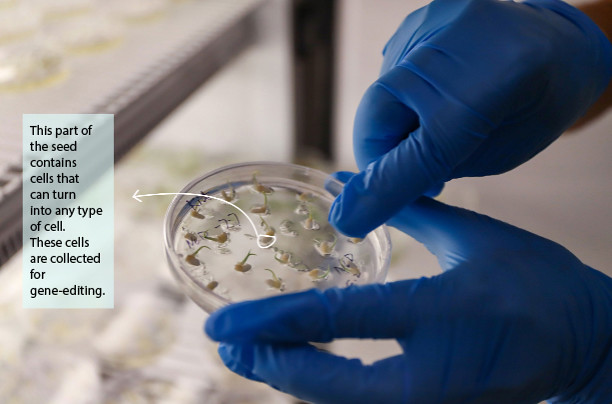 But how do scientists insert instructions into a cell?

In the Yang lab, they use particle bombardment to insert DNA, fundamental instructions used to build everything within a cell. These inserted DNA strands tell the cells how to build the CRISPR tools to change their own DNA.

To shoot the DNA molecules into the cells, researchers use high pressure helium gas operated gene gun to bombard the cells with DNA coated gold particles.

Once the DNA instructions are in the cell, they build the CRISPR-Cas9 tool using the plant’s genetic machinery.

CRISPR-Cas9 has two parts: the Cas9 protein and an RNA molecule that only binds to the DNA section scientists want to change. This RNA strand guides the Cas9 to the correct location.

But the parts of the guide RNA do two things. First, the spacer part — usually about 20 base pairs only binds to the section of DNA researchers want it to. Second, a part called the scaffold — nearly four times the size of the spacer is required for attaching to the Cas9.

When the spacer of guide RNA binds to the DNA, the Cas9 enzyme acts like a pair of scissors, cutting that section of DNA.

Now we have DNA broken in two, and the plant’s built-in repair system starts its job. However, this repair system is flawed, and it usually messes up while rebuilding the DNA’s bases, or building blocks. Its errors vary every time, so many different mutations are possible.

“The repair machinery which is employed is not perfect,” Gupta said. “When it repairs those double-strand breaks, it causes some errors. The error could be a single base, and it could be 10 bases or it could be a thousand bases. So that is unpredictable.”

Think of it this way: imagine you have a ten-page instruction manual, and you rip out pages two and three. You could replace them with blank, yellow or red pieces of paper and the book would have ten pages again, but the instruction manual can’t be used again. Just like that, it doesn’t matter which error happens, because any mutated change in the gene results in it not working.

“This is how the normal CRISPR-Cas9 works, when you just want to shut that gene down,” Gupta said.

This puts the gene’s instructions out of commission and is commonly called a knockout gene. That helps scientists determine what the particular gene does. They then compare “normal” plants to plants with the knocked out gene to determine what happens differently.

Now the waiting happens. Researchers grow the plants using different hormones to mature the callus cells into roots and stems.

“Once they have shoots and roots then you transfer them to soil and grow the complete plants out of that,” Gupta said.

When the plants become adults, the researchers check the knocked out changes by extracting its DNA in a process known as genotyping.

While traditional CRISPR-Cas9 is used by researchers to learn more about plant genomes, Gupta and others in the Yang lab also work to edit parts of DNA and replace it with specific mutations. This process is known as prime editing.

“The exciting part about this [prime editing] is that theoretically it can do anything,” Gupta said.

Prime editing takes traditional CRISPR-Cas9 editing a step further, and the Yang lab’s research into it opens the door for future collaborations with labs around the world in applied and basic sciences.