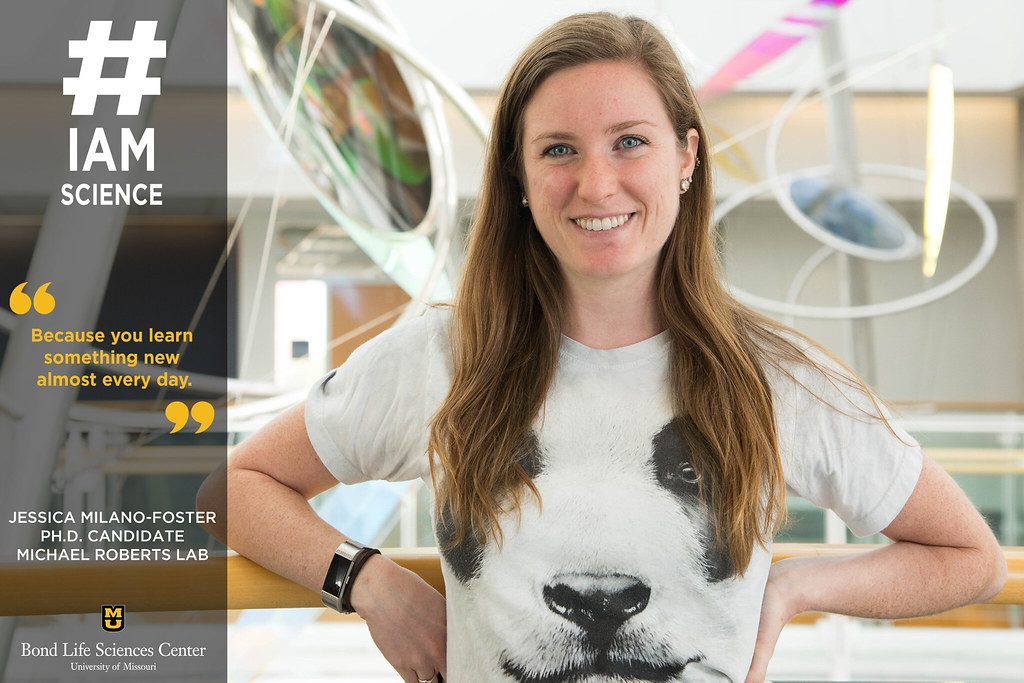 The placenta is a crucial organ that develops in a woman’s body during pregnancy that provides oxygen and nutrients to the fetus. After her experience doing research on this organ while getting her master’s degree at the University of Kansas Medical Center, current MU Ph.D. student Jessica Milano-Foster has become passionate about studying it. To continue her education, she has teamed up with Laura Schulz’s lab in the MU School of Medicine and Michael Roberts’ lab at Bond LSC to look at the role of mitochondria in the placenta during early onset preeclampsia.

Milano-Foster did not begin her educational career studying the placenta or any sort of biology. In fact, she got her bachelor’s degree from Truman State University in chemistry.

“The initial goal was to be a forensic chemist,” she said, “But then, I was really bored in my forensic science class. So, I wanted to try research because I thought that might be interesting.”

The rest is history.

While doing research, she was introduced to epigenetics — the study of changes in organisms that are caused by modification of gene expression. This piqued her interest and led her to Dr. Souman Paul’s lab at the University of Kansas, which solidified her decision to not pursue forensic chemistry anymore.

“The thing that I really like about research is that you learn something new almost every day,” something she was not getting previously.

After her bachelor’s degree, Milano-Foster continued in Dr. Paul’s lab as a Master’s student and was first introduced to the placenta.

“His lab focuses on reproductive biology and I just kind of fell in love with the placenta along the way,” she explained. “I think it’s so cool because it’s something that we have to build in our bodies in order to create life. And then it goes away. And then it can come back again if you decide to be pregnant again. No other organ does that.”

The more she studied the placenta, the more she became fascinated by it. After finishing her Master’s degree at KU, Milano-Foster got an offer to stay in Dr. Paul’s lab for her Ph.D., but she declined because she was moving to Missouri with her husband who was starting medical school.

She began working as a lab technician for Tom Spencer, a MU professor of animal sciences studying neonatal uterine development in mice. While it was still in the realm of reproductive research, it was not focused on the placenta.

“It was interesting, but I wasn’t really motivated the way that I was in my Master’s to learn more and more and more about the placenta and epigenetics,” Milano-Foster said. “I wasn’t that excited about the uterus but, you know, I thought that as I learned more about it I’d get more excited, and I didn’t. It was just a matter of being honest with myself and honest with my advisor, and it worked out.”

After discussing this with Dr. Spencer, he agreed his lab would not be the right fit for her. There were no hard feelings and he helped look for opportunities at MU to conduct more research on the placenta. Turns out Dr. Laura Schulz had a spot open in her lab. Dr. Schulz’s lab focuses on how hormones and nutrition during pregnancy affect the function of the placenta and the health of the fetus, which was right up Milano-Foster’s alley. She has been with Dr. Schulz’s lab since last fall and now collaborates with the Roberts’ lab to continue her research.

“Because of the nature of my work, I have to be in the Roberts’ lab to do it,” she said, and she thinks it has been a good match so far. Roberts’ lab focuses on reproductive biology and stem cell research, allowing Milano-Foster to research early onset preeclampsia, a pregnancy complication characterized by high blood pressure that can have fatal consequences for the mother and the fetus. Her research focuses on mitochondrial dysfunction in the condition.

Despite only being here for a few months, Milano-Foster has already made progress conducting experiments on the mitochondria where she tests stem cells.

“They’re very picky,” she said, “You have to tend to them every single day. They have preferred growing matrices and everything.”

Milano-Foster not only learned how to control the cells, but also had to find a way to get them into small wells in order to conduct mitochondrial stress tests. It took some time, but she did so just as she had to go on maternity leave, putting the experiment on pause.

Her daughter is now a month old and Milano-Foster has about eight weeks of maternity leave left. She is eager to start working on her research again.

“I’m excited to jump back into that and get my replicates going. That way I can get some answers because right now my project is very much like we don’t know what’s going to happen,” she said.

Being out of the lab doesn’t excuse her from being a student as she still has to write and study for her Ph.D. She studies while her daughter naps, but has yet to get on a steady routine. Milano-Foster is also squeezing in time for her hobbies, “I work out every day and I’m hoping that while I’m on leave, I’ll have some more time to play the piano.”

Milano-Foster hopes to finish her Ph.D. here at MU within the next three years, four if necessary.

“A lot of that depends on how the project goes,” she said. After her Ph.D., she wants to continue doing her own research in a translational or clinical setting where she would be a senior scientist.

Between maternity leave and being forced to shelter-in-place due to COVID-19, Milano-Foster is taking things day by day for now. She is itching to get back to the lab and continue her passion and hopefully that day will come soon.