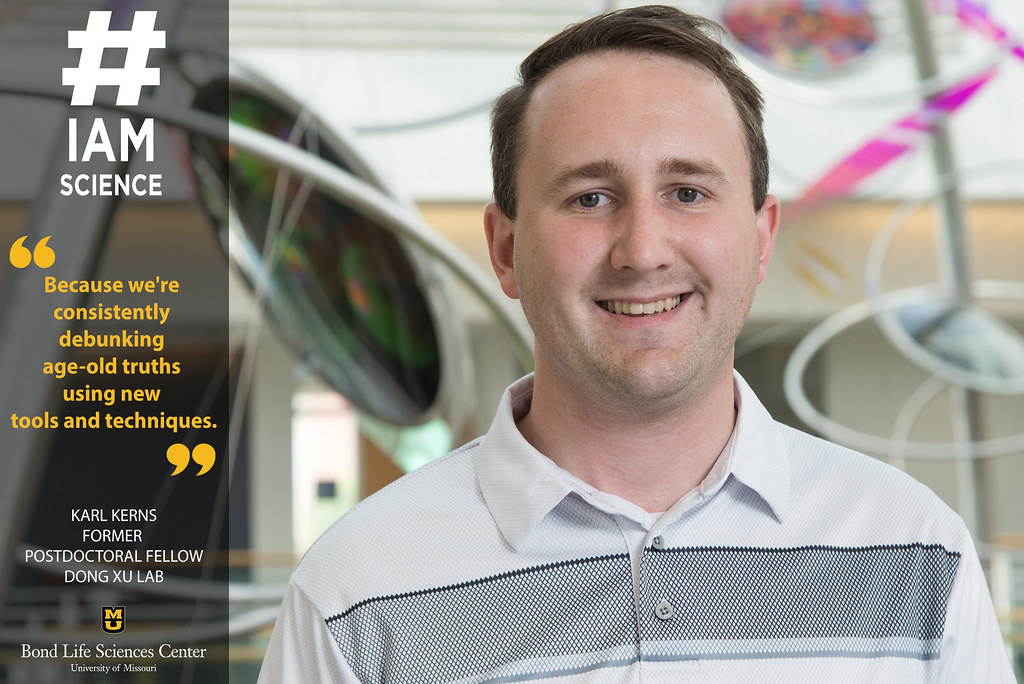 It’s all about the journey and Karl Kerns has been places.

Originally from a small town in southwestern Iowa, Kerns did his undergrad years at Iowa State University (ISU), taking internships in Maryland, Texas, southeast Asia, and southern Australia, among other places that focused on animal physiology and fertilization.

“I do like traveling just in the sense of vacation. I like having a purpose while traveling. It’s hard for me to sit back and relax and be in vacation mode,” Kerns said.

This focus and determination eventually brought him to Mizzou where he completed his postdoctoral fellowship in the Dong Xu lab at Bond Life Sciences Center this past spring, co-advised with Peter Sutovsky and Susanta Behura in the Division of Animal Sciences. Kerns was initially attracted to MU for his doctoral training because of the reputation of the animal sciences’ reproductive physiology program, but he then joined Bond LSC to continue his research during his USDA NIFA Postdoctoral Fellowship.

“MU is a world class institution. There are not many places that offer the resources we are fortunate to have here with the combination of animal science, veterinary medicine, and the resources of a research hospital system,” Kerns said. “And it’s not just equipment resources, but also intellect and the people that we [Bond LSC] have, it really provides an atmosphere that lets you dig into science a little bit deeper than you can anywhere else.”

This atmosphere at Bond LSC has aided Kerns in his current position as a newly-minted faculty member at ISU.

“It set me up for success. Especially in the middle of COVID right now, there’s not a lot of faculty positions available, so to get a faculty position when all those other positions were being halted, it speaks volumes to the training I received here,” Kerns said.

Going back to his alma mater as a professor was not exactly the homecoming Kerns expected.

“It’s a very odd timeframe coming back during COVID when the buildings are not bustling with students and faculty.”

In the Xu lab, Kerns worked on bioinformatics and artificial intelligence with graduate students. They were able to incorporate machine and deep learning analysis with high throughput, single cell phenotyping, looking at multi-million cell data sets for bioimage analysis.

“There are multiple times that you step back from the microscope or from the computer after doing data analysis and you have so much awe and admiration for how all these intricate biological functions have to come together to support life,” Kerns said. “That is what fuels me.”

Kerns’ first publication at Mizzou was about how zinc, a vital micronutrient, helps regulate fertility in pigs, cattle, and humans.

“Research in the life sciences is extraordinarily rewarding because there is a time between initial discovery and publication that just you and your co-authors know this little piece of how life as we know it functions, previously unknown from the start of time,” Kerns said.

While he enjoys special moments like these in the lab, Kerns has been enjoying his time in the classroom with students during this isolating time of the pandemic as well.

“It’s my duty, being taxpayer funded in the training that I got, to make sure I teach the next generation,” Kerns said, “Let them have a taste of the cutting-edge technologies I learned at Mizzou and cutting-edge research findings that we found. The academia system is all about having people that are experts in a set area and passing it down to the next generation to expand on.”

Along with teaching, Kerns is also doing research at ISU. He is currently working on analyzing the fertility of boars and bulls to see what helps predict their fertility. Significant amounts of research and improvements focus on the female side of reproduction but not male, so by improving male fertility, Kerns will be able to help livestock producers and stakeholders improve their efficiency.

Kerns has big plans for his research in the future.

“Once we optimize male fertility, we can start taking superior genetics to third world countries that need a good protein source that can grow in their particular climate — we know protein is a source of complete amino acids that provides better cognitive function for people — and also provide a source of financial security for their families as well. It’s a win-win,” Kerns said.

Until then, Kerns plans to continue teaching and doing research. His science journey has taken him many places so far, and his is not stopping there.

“Science is always changing,” Kerns said. “When we say, ‘what does the science say?’ The science only says our current interpretation of it. In the grand scheme, we have so much more to learn. Every day we’re learning more about our world and not uncommonly disproving what we used to hold to as true because of new techniques now available to us.”