Trying to understand amino acid regulation for the good of humanity 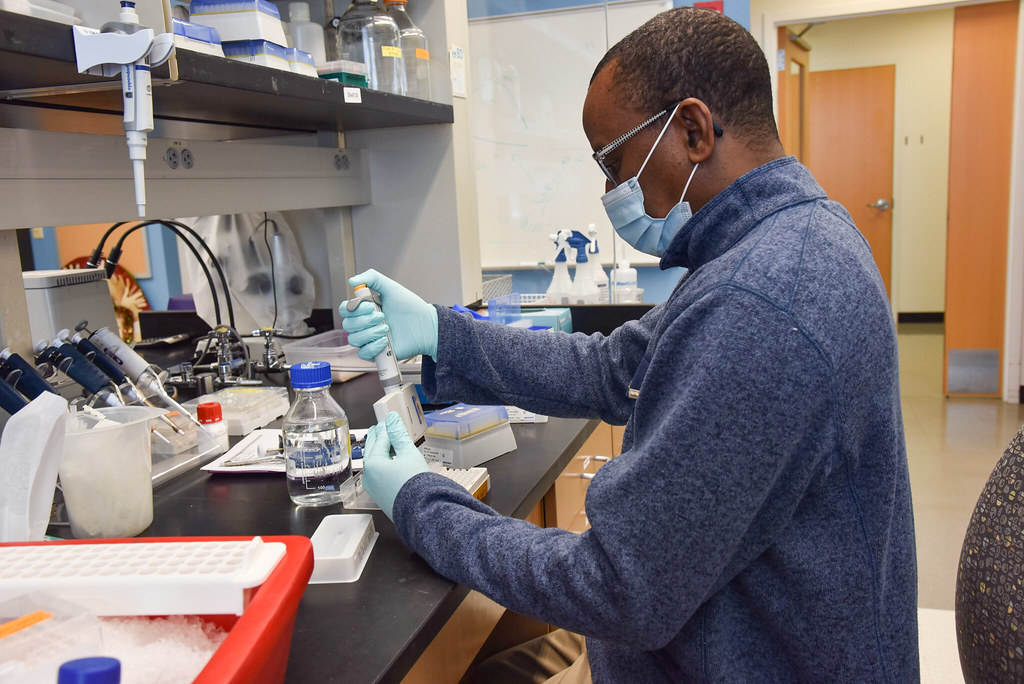 Many works aimed at improving seed nutritional quality have been faced with limited success because of the lack of clear understanding of how amino acids are regulated. Abou Yobi wanted to get to the bottom of this.

Yobi, lab supervisor in the Ruthie Angelovici lab at Bond Life Sciences Center, has been working on understanding how amino acids are regulated in seeds for years.

“We can use that understanding to improve seed quality in crop plants so can we increase those essential amino acids,” Yobi said. “Developing countries rely heavily on crops like wheat and maize, but they need to find a crop that could provide them with those amino acids.”

Essential amino acids are a vital part of nutrition that cannot be made by our body, so we have to get them from food like soybeans, quinoa, and eggs.

“We know that most crops lack at least one or two of these essential amino acids,” Yobi said. “For many years, scientists have been trying to improve those amino acids, but the outcome was always minor because of how seeds regulate their protein-bound amino acids to maintain a specific composition. Until we fully understand of such regulation, any effort aimed at improving seed quality through increasing the composition of essential amino acids would be unsuccessful.”

To do this, Yobi uses multi-omics approaches and bioinformatics tools to identify amino acid differences that occurred through natural variation and associate them with proteins and genes. This approach combined with using a large set of seed storage protein mutants could help identify targets for seed biofortification.

Clement Bagaza, a graduate student in the Angelovici lab, works with Yobi in trying to understand how they can alter the seed and grain amino acids for the benefit of nutritional value to humans and animals.

“I grow 1,001 and 360 Arabidopsis ecotypes populations twice, these populations in combination with maize populations are being used in the lab to try and come up with genes that are involved in amino acids metabolism. These are huge populations to deal with,” Bagaza said.

That is a lot to handle, so they collaborate with other labs to balance out the workload. Collaborators look to the Angelovici lab’s vast knowledge of amino acids and their amino acid analysis for help with their own research.

“Different scientists on campus and off are interested to incorporate the analysis of amino acids in their research, and this opened a lot of collaborations with Angelovici’s lab which provides that service,” Bagaza said. “We’re the lab you should look at if you want to do some amino acid analysis.”

For Yobi, seeing the lab gain more collaborations and recognition has been exciting.

“A lot of people, not just from our university here, but from other universities, are coming and collaborating with us on this and it’s very rewarding to know that what you’re doing is very interesting to other people, not just to you personally,” Yobi said.

Yobi and Bagaza hope that these collaborations lead to more discoveries on how to regulate essential amino acids to improve crops.

“I am from a place [Rwanda] where nutrition is a problem,” Bagaza said. “Not only my place where people can face both malnutrition and undernutrition, but other places of the world might face one or both of these issues. Having enough on the table doesn’t mean you’re eating heatlhy, we should also think about the content of what we are eating.”

While they have worked on this research for years, Yobi and Bagaza are confident they will continue to find answers to improve the nutrition of others.

“We have a lot of publications, we have a good number of collaborators, and things are moving very well so far,” Yobi said. “We are looking forward to being able to do good things for the good of humanity.”