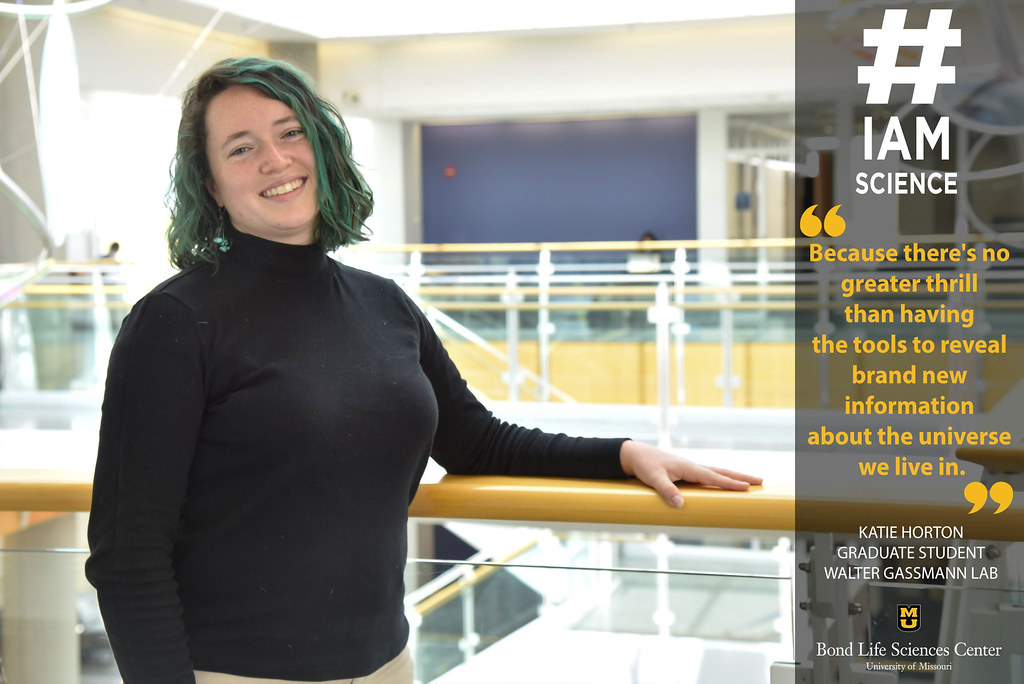 Katie Horton feels most at home in the shady woods of the Southeastern United States, so much so that she can name and give out a few facts about almost all of the plants.

Horton, a graduate student in the Walter Gassmann lab at Bond Life Sciences Center, moved to Columbia in August, and has a lot to learn about plants native to the Midwest.

“One of the things I’ve struggled with so far is that I don’t know many of the plants here in Columbia by sight. There are some that are pretty widespread and regular, like I recognized most of the weedy-type plants, but we didn’t have Cottonwoods where I am from and that’s one of the biggest trees here,” Horton said. “I can’t wait to get out and hike the trails and look at all of the plants.”

A plant lover through and through, Horton had more than 50 houseplants the last time she counted.

“My boyfriend and I try to make a garden anywhere we go,” Horton said. “We always tell our friends that if they’re doing yard work and if they pay for the plants, they can call us and we’ll do all the planting and design work. We’re in the process of making a garden for food and for flowers at our current rental.”

This energy has been welcomed in the Gassmann lab where she has already taken some undergraduate students under her wing and is planning her own project.

“It’s honestly impressive how much she knows about plants, like the Latin names and the diseases that they might encounter. She can even look at something that she doesn’t know and go through a list of what type of leaves it has, and so on, and make a conclusion,” Sam Smith said.

Smith, an undergraduate student in the Gassmann lab, has become close with Horton in her short time there.

“One time I had finished all of my stuff for the day, and she wanted to show me a flower that bloomed on campus the day before,” Smith said. “So, we left the lab and walked across campus to see it. Once we got to the flower, she was able to tell me its name and a bunch of facts about it. Mizzou is a botanical garden so she’s basically having a field day.”

While Horton is having fun as a graduate student, this all almost did not happen. When she first went to college, she flunked out, and almost flunked out a second time, too.

“There were a lot of ups and downs,” Horton said. “It got to the point where if I failed chemistry one more time, I wouldn’t have been able to be a biology student anymore. I’ve never really seen quitting as an option, though, and as soon as I became interested in botany and plant sciences, that was my only goal. There’s no quitting in life, I can’t just sit down and say ‘okay I’m done,’ I have to keep going. The sun is going to come up again, you can’t just stop.”

Horton credits her previous advisor at the University of North Georgia for keeping her on track.

“The most important thing is finding a mentor or advisor that you really mesh with and is excited about the things that you’re excited about,” Horton said.  “If I hadn’t had teachers and professors take an interest in me, I wouldn’t be where I am today.”

In addition to helping in the Gassmann lab, Horton is also a part of the Southern Appalachian Botanical Society (SABS), where she shares her love of plants with others.

SABS has their own science publication and provide scholarships to students and professionals for their botanical research.

“It is a really great way to do outreach for students and to get young people involved in botany,” Horton said. “I want to help rejuvenate the membership needs and get people excited about native ecosystemms and the way that things interact with each other.”

Even though she does not live in the Southeastern United States anymore, Horton is able to stay connected to the program online.

“We mostly meet online because we’re from all over the southeast,” Horton said. “I am able to meet all these botanists from the whole southeast and we share pictures with each other, and I think it’s great, the sense of community that it builds, and the outreach that you get, being part of something that is so wide.”

In the meantime, Horton is preparing for her first committee meeting for her graduate project here at Bond LSC, and plans on going on many hikes this summer.

“I’ve got plans out to go hiking with friends already,” Horton said. “We’ve got plant people, bird people, insect people…It’s going to be a lot of fun.”