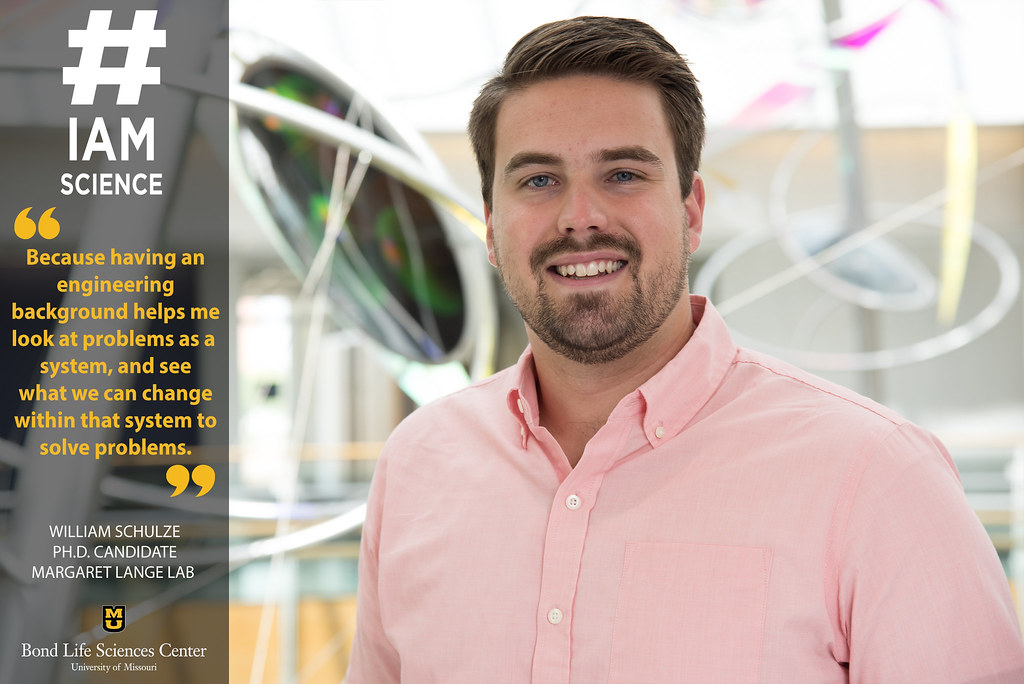 The best piece of advice Ph.D. candidate Billy Schulze ever received was from his father before a baseball game in high school. In past games, Schulze kept striking out. He wasn’t getting any runs. Things seemed bleak.

Schulze’s father pulled him aside and said with a smile, “Don’t suck.”

“That just kind of made me giggle,” Schulze said. “I think the real message behind that story is don’t think about it too hard. Relax. Have some fun…You can’t take things too seriously, having a sense of humor is so important. Working hard and pushing through problems is vital, especially in science where failure is so common.”

Schulze has brought that mentality to his research in the Margaret Lange lab at Bond Life Sciences Center since he joined in 2019. Whether he’s working on innate immunity or becoming one of the first biomedical engineer graduates at Mizzou, Schulze understands balance is vital in and out of research.

Taking after his father, Schulze wanted to become an engineer. However, it didn’t quite tick all his boxes.

“I have always been fascinated with biology,” Schulze said. “I just distinctly remember being in eighth grade when we went out to the pond water behind my middle school and looked at the pond water with a microscope. Seeing all of the protozoa and stuff that are in the pond water was really cool to me, and that just kind of stuck with me.”

Schulze merged engineering and biology when he became one of the first four students to graduate from biomedical engineering in 2018.

Soon after going back for his Ph.D., Schulze founded the Molecular Pathogenesis and Therapeutics Graduate Student Organization (MPTGSO). It’s aimed at improving the MPT degree by facilitating student feedback to faculty.

“I think that’s the thing I’m most proud of that I’ve done here, just being president of [MPTGSO], founding that and really just trying to be a voice for the entire student body of the program to the faculty in an attempt to just make everybody’s lives better within the program,” Schulze said.

When not helping graduate students, Schulze is in the Lange lab studying viruses, the innate immune systems and what causes Toll-like receptors (TLRs) to activate. TLRs are a class of receptors that can recognize various structures and molecules to trigger an immune system response. The Lange lab focuses on nucleic acid detecting TLRs.

Schulze is using a piece of the poliovirus genome (PV-5) known to bind to these specific receptors to create an immune response to the virus. This allows him to see which receptors activate and why.

The Lange lab is creating a library of RNA sequences based on the genetic information of PV-5 to find which receptors activate.

“In this pandemic-affected world, viruses are at the forefront of health right now, and it’s something that everybody’s thinking about, and we’re specifically looking at the host-virus interface, something that is not necessarily the best understood,” Schulze said. “But at the same time, if we can help to modulate the immune response to viruses, we can potentially have better…potential antiviral therapeutics.”

When Schulze joined Bond LSC in 2016 as part of the Marc Johnson lab, he still had to learn all basic bench skills. Johnson lab supervisor Terri Lyddon was the one who showed him the ropes.

“He was definitely a worthwhile undergraduate student to have in the lab,” Lyddon said. “He was dependable, and he liked the work and came in with a positive attitude every day.”

Lyddon remembers how Schulze was always the one to speak up in lab meetings and ask questions about anything from the lab equipment to why they used particular procedures.

“There are certain levels of enthusiasm and inquisitiveness that come with almost anybody that comes to the lab because you have to want to do this kind of work in the first place…but he brought it to the lab in a unique way,” Lyddon said. “He was curious, and while some others may be curious, they don’t go on to find out the answers to those questions.”

When Schulze’s time in the lab eventually ends, he hopes to move on to a biotechnology company he truly believes in. For now, he’ll be in the lab keeping his dad’s advice in the back of his mind.

“Frankly, I think [science] is a frustrating field to work in, but it is also one of the most rewarding fields for that reason because you’ve overcome so much to find what you found, to prove what you’ve proven,” Schulze said. “I think it’s really cool, but it does require a lot of persistence.”