During pregnancy, the fetus and mother can talk to each other without saying a word. On a deeper level, a special cell called the syncytiotrophoblast (STB) facilitates this conversation by changing the mother’s physiology based on what the fetus does or does not need.

The Michael Roberts lab at Bond Life Sciences Center knew there had to be other types of this essential cell. However, it wasn’t until postdoctoral fellow Teka Khan recently applied a method to analyze these cells that the lab reported for the first time two kinds of STBs.

“It was, as you can see, a new discovery in the field of placental and developmental biology,” Khan said. “We identified two different kinds of clusters from single nucleus RNA sequence, with a strong resemblance to STBs.”

These cells are responsible for gas exchange between the mother and the fetus — supplying oxygen via the placenta to the baby and disposing of carbon dioxide away from the fetus via circulation. It also produces a range of hormones including HCG, which helps maintain pregnancy. These cells line the placenta and lack many receptors and cell junctions commonly used by viruses to enter the cell, so in theory, they should be impenetrable to viruses.

“Anything that the syncytiotrophoblast is doing correctly or incorrectly could have a major impact on fetal development and then also how the maternal physiology is signaling,” said Megan Sheridan, postdoctoral fellow working with the Roberts lab.

Fully understanding these cells has been difficult due to their large size, fragility, cytoplasm nature and their unusual 5-15 nuclei. Researchers usually use single-cell RNA sequencing (scRNAseq) to understand different cell types in the human placenta since most cells only have one nucleus. However, STBs are least represented by most of these scRNAseq studies, since they are multinucleated, large and fragile.

“Before that, since people were doing single-cell RNA sequence, the syncytiotrophoblasts were … represented with very little information,” Khan said.

After using this method, Khan found two different nuclei clusters, indicating there were two different types. It was the first-ever attempt of its kind used on trophoblast cell colonies.

The two distinct kinds of STBs have differences in their gene expression profiles, which makes Khan believe they have different functions. However, it’s too early to say what those functions are.

Due to ethical and technical issues, researchers struggle to study the early stages of the human placenta. So, researchers use the BAP model of an early placenta to understand what’s going on in early pregnancy to eventually avoid disorders like miscarriages and preeclampsia. Better understanding this new type of syncytiotrophoblast and other placenta cells can bolster current models of the human placenta.

“Now we are doing the time course experiment using the same snRNAseq technology to see if we can identify how these cell types originate during the differentiation procedure and how they generate different kinds of cells,” Khan said. “This would definitely help us to understand the developmental process of the earliest stages of pregnancy and the placenta, especially the first two to three weeks of the placentation.”

Depending on the function of this new type, researchers could eventually create more targeted treatments.

“If [Khan] can then apply this to our preeclampsia models, then we could find signaling molecules that might be released by STB that is bad versus STB that’s good and see if we could find some sort of marker that would predict if the pregnancy might go wrong,” Sheridan said. “That’s way down the road, but that could be something.”

Now Khan is trying to find the functions of these two types of STBs and how he can apply this to the lab’s current model.

To learn more, read about single-nucleus RNA sequencing in Frontiers in Cell and Developmental Biology or about the BAP model used by the Roberts’ lab. 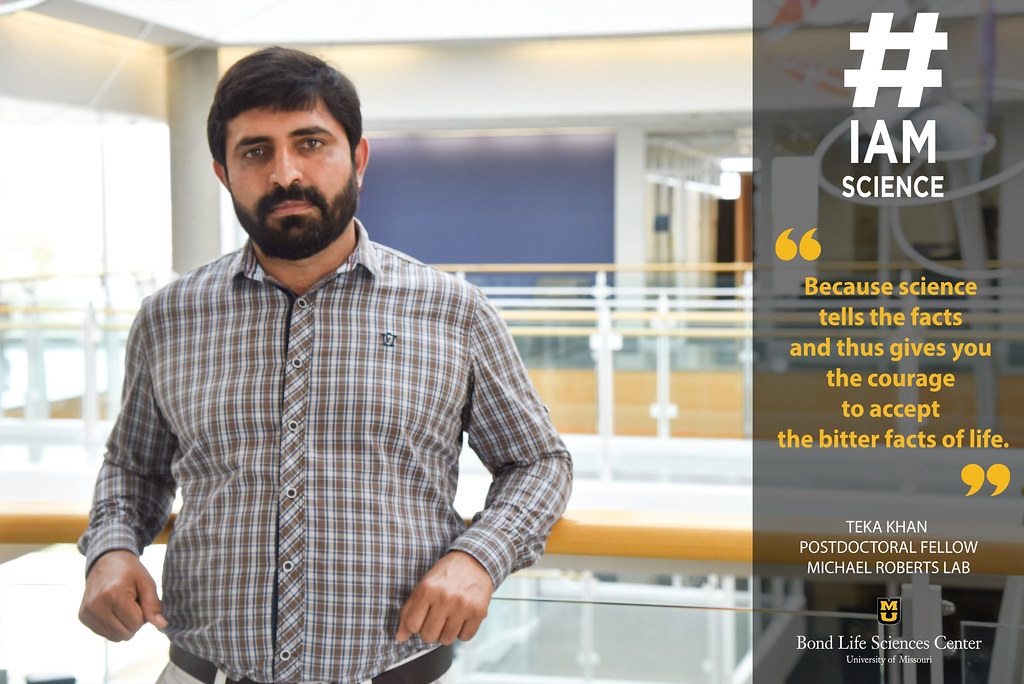 Growing up in the countryside of Pakistan, Teka Khan did not have a science class in high school. In fact, his first science class was in college and it was in English — a language he did not know at the time.

Now a postdoctoral fellow in the Michael Roberts’ lab, Khan knows his stuff, and wants to give back to his community in Pakistan.

To do so, he helps with the Youth Educational & Welfare Organization in Mattani, Peshawar, Pakistan (YEWOM).

YEWOM promotes educational and welfare activities in hopes of improving the community and making students productive people in society.

“We usually have different types of activities,” Khan said. “We visit different schools to observe if there are any deficiencies in quality of learning, if there’s water or if there aren’t any toilets for the kids. Depending on the cost, we try to fix it. If the cost is beyond our limit, we try to find a funding agency or consult NGOs in the government organization.”

Khan was president of YEWOM for two years and still helps out even though he now lives over 7,000 miles away.

“From here, I usually give them suggestions,” Khan said. “So right now I’m contributing by sharing my own experiences, because I’m one of the senior most in the organization. We always promote the young people so they can learn how to lead the community. We provide them the platform to grow.”

Khan has always had a passion for helping others. To him, it is the best way to become a good person.

“It is necessary for each and every human being to do some work to live,” Khan said. “I’m a researcher, somebody will be a teacher, somebody will be a businessman, and so on. The ultimate goal is to get the resources for life, which we are doing for ourselves. But it doesn’t matter how much I’m a good scientist or how rich a businessman is, what matters is if we are good human beings, to me, that is most important. Everyone should be firstly a good human being then you can do other things.”

“He spent a long time to come here but he never gave up and eventually came here in March [2020],” Ezashi said. “He tried to invite his family here around June, but then the pandemic happened. I think it was hard to him because he couldn’t see them for such an extended time. I don’t think they were able to join him until last November, but he didn’t complain. He just put all of his time and energy into the science and research. Even after his family joined him, he’s still passionate about his work.”

In the lab, Khan is working on developing trophoblasts in the early stages of the human placenta using embryonic stem cells.

“Sometimes experiments don’t work, but he doesn’t get upset,” Ezashi said. “He might be feeling bad, but he doesn’t project that onto others and never gets discouraged by failure. He just keeps pressing forward and tries to improve.”

This tenacity has paid off for Khan. He has developed protocol for isolating nuclei from trophoblast cells and is publishing that work soon.

Now that Khan has settled down here at Bond LSC, he plans on continuing to help others and promote educational opportunities.