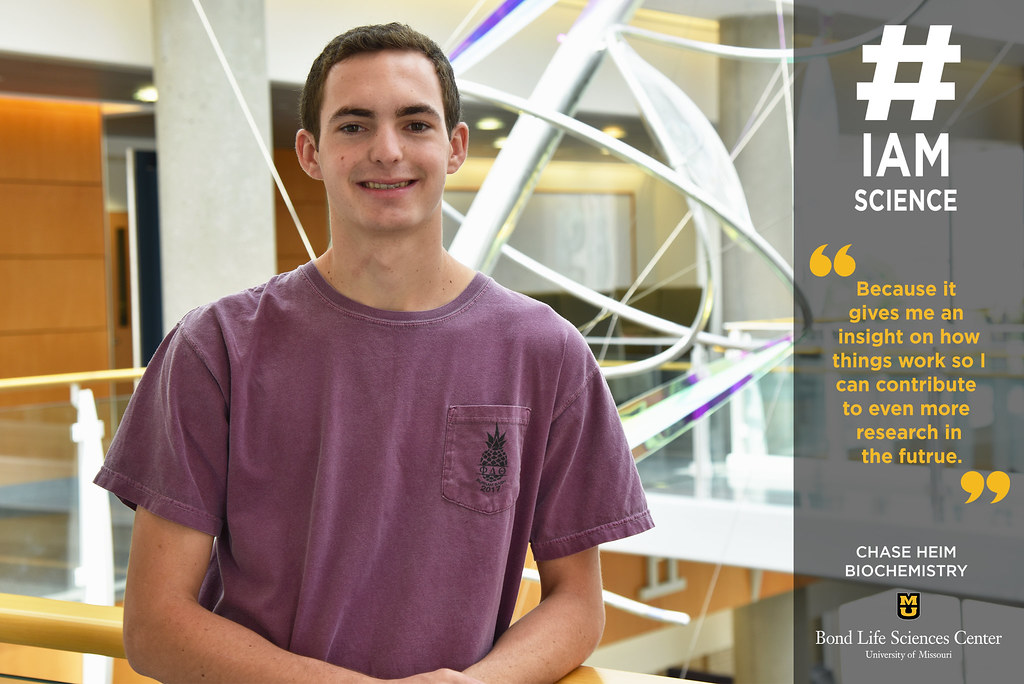 Chaise Heim wasn’t reluctant in his pursuit of science.

In high school, a program called Triple E gave him his first major exposure to his desired career in the form of an internship. That led him to David Emerich’s lab in MU’s biochemistry department where he spent a cumulative 40 hours during the program.

“From working there, I realized I liked the sciences,” Heim said. “I came to college and continued to work with him, but realized plant science wasn’t the direction I wanted to go, so I talked to my mentors and found the Burke lab and now I love it.”

Heim has worked in Donald Burke’s lab in Bond LSC since January. Being in the lab for almost nine months has taught Heim different perspectives on science.

“I am able to understand so many different scientific methods,” Heim said.  “Being in a lab is a different experience than just reciting what you’ve learned in classes. I would argue I have learned more in the Burke lab than in class labs I have taken here at Mizzou.”

By shadowing Ph.D. student Nguyen Phuong, Heim is guided through the processes and given research papers to help comprehend the science.

“Our research is on aptamers,” Heim said. “Aptamers are nucleotides — DNA fragments that are joined together — that we use to bind an active site of the reverse transcriptase, a protein in HIV that changes the RNA into double stranded DNA helix.”

The aptamers are used to bind to HIV protein in the reverse transcriptase.

“The goal is to see if it changes the protein functionality,” Heim said. “Which in the end will help us delay HIV infections.”

Although Heim is starting his sophomore year, he already plans to guide others through research in the future, much like how he is being guided now.

“I want to become a PHD student and guide undergrads,” Heim said. “I know how it feels. You are learning so much, gaining so much material from what they are teaching you and I really cherish that experience.”

“I have learned how to communicate to an audience and have been taught how to present in a better way,” Heim said. “Biochemistry club also helps you network, which is part of the reason I heard of the Burke lab.”

Heim’s involvement includes Deaton Scholars, the Chancellors Leadership Class and being a TA, the Emerging Leaders Program and Phi Delta Theta Fraternity. Heim said the language of science has pushed him to get more involved in research.

“Being able to talk about my science with people helps me prepare,” Heim said. “The people in these organizations have helped me become better at communicating my research.”

Setting a routine makes everything easier. However, changes to a set routine often leads to complications.

For Maddie Willis, a senior biochemistry major, that change came in the form of working in different labs and learning their unique styles and areas of emphasis. She started in Lori Eggert’s lab freshman year and switched into Frank Schmidt’s lab for the next two years before changing labs a final time for her last year at Mizzou.

“I got involved in research as a freshman [in Eggert’s lab] through the Honors College Discovery Fellows program,” Willis said. “Then when Professor Schmidt retired, he recommended I look into Donald Burke’s lab.”

In Burke’s lab, she works with ribonucleic acid (RNA) aptamers — artificial RNA molecules that bind a particular target. Aptamers can be used for synthetic biology applications, molecular therapies and to investigate origin of life questions.

Willis works on the latter of the three questions and is characterizing features of an RNA aptamer that can discriminate between the two redox states of Flavin adenine dinucleotide (FAD) — a nucleotide cofactor that appears along with many others in modern metabolism. It has been hypothesized that they are holdovers from an RNA world, when RNA catalyzed prebiotic reactions before being replaced by protein enzymes.

“It’s unprecedented that we found an aptamer that can do that, because it’s such a minor change to the molecule,” Willis said. “I’m doing a reselection, allowing mutations to find out what still binds FAD, to find what’s important.”

Willis’ work is more in touch with human nature than anything else. If the aptamer can change the redox potential of bound FAD, it could potentially enable redox chemistry, which is essential for life.

“To an extent, we’re never going to be able to answer what actually happened at a molecular level billions of years ago,” Willis said. “My project, however, helps humanity to learn about where we came from.”

While the project doesn’t have immediate applications, its implications are significant.

“There are huge advances that come from basic research that no one could’ve anticipated, so it’s important to do,” Willis said.

After she graduates in May, Willis is looking to work in industry for a few years before attending graduate school.

“I had an internship last year, and I learned a lot,” Willis said. “I want to get real-world experience before pursuing more education.”

When she’s not in the lab working with RNA, Willis serves as an undergraduate research ambassador for the university.

“We support the office of undergraduate research by talking to students about research opportunities throughout campus,” Willis said.

It’s no secret that Willis has benefited from her time in the lab, so it makes sense she jumped at the opportunity to help others find their place too. In fact, it’s something that has rounded out her college career.

“Research has been the cornerstone of my experience at Mizzou,” Willis said. “Helping people find that is rewarding.”

“#IAmScience because research has really shaped the way I think about things.”

Science isn’t limited to the lab. It’s more of a mindset than a discipline, and Madeline McFarland knows this all too well.

As a senior biochemistry major working in Donald Burke’s lab in Bond LSC, McFarland experiments with ribonucleic acid (RNA) to study the origin of life before DNA and protein served as genetic material and catalyst, respectively.

“I’m interested in the RNA World Hypothesis and how RNA may have played a role in getting life started on our planet,” McFarland said.

This hypothesis suggests early forms of life on Earth may have relied solely on RNA to store genetic information and to catalalyze, or spur, chemical reactions. The theory goes that DNA eventually evolved to take its place due to the instability and ineffectiveness of RNA.

In the lab, McFarland focuses on using a program called systematic evolution of ligands by exponential enrichment (SELEX), which filters the RNA so she can find which strands do what she’s looking for. Specifically, she’s trying to determine if the RNA can make a reaction happen. If McFarland can find this connection, scientists would see that as support for for the RNA World Hypothesis.

“I’m trying to see which RNAs can perform a catalytic function,” McFarland said. “By doing that, we can kind of start to think about how RNA used to function in early earth.”

Her typical day starts at 9 a.m. when she heads to Bond LSC to get her experiments set up for the day.

“I go to class while they’re incubating,” McFarland said. “My science allows me to set stuff up and have a break while it’s running. I’m usually running experiments four days a week.”

McFarland was inspired by the work being done in Bond LSC and the analytical way of thinking about experiments.

“[Research] is kind of nailed into you as soon as you step on campus,” McFarland said. “That was the motivating factor, but I came to love it for a lot of reasons. It’s really shaped the way I think about things.”

When she’s not wearing her lab coat and investigating the origins of life, McFarland spends her time working in environmental efforts at Mizzou.

“I’m really passionate about sustainability in all of its forms: environmental, economic and social,” McFarland said. “I lead the electronic waste drives around campus, and I’m co-directing sustainability week this year.”

McFarland is also a co-president of the biochemistry club.

“In our meetings, we bring in grad students and faculty to talk about career options, so everyone can ask questions,” McFarland said. “We also do fun events. Last night, we had a biochemistry-themed breakout room. They had to balance chemical equations and transcribe and translate a DNA sequence to spell out a word. We have a lot of fun with it.”

All of her work in the lab in combination with her research at Bond LSC has only strengthened her bid for her next endeavor: medical school.

“I’m passionate about communicating science, and I think medicine would allow me to do that,” McFarland said. “I like the idea of radiology because it allows you to look at an image, or data, then think through things on your own, which is a lot like research.”

If she doesn’t end up at medical school, McFarland would like to continue to pursue education. She could see herself attending graduate school.

“I’m interested in a master’s in public health,” McFarland said. “It would allow me to expand my knowledge of science and how it relates to health beyond the scope of the lab.”

Regardless of if she continues to learn through medical or graduate school, though, McFarland credits research for having an immense impact on her career.

“Research has really shaped the way I think about things,” McFarland said.