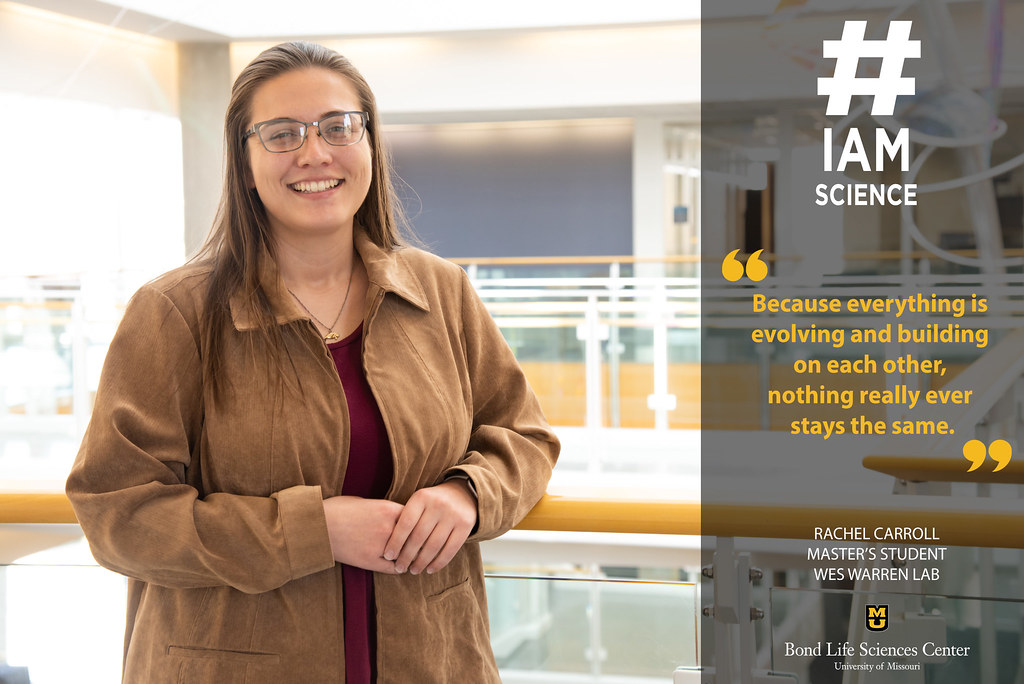 Growing up with many pets and watching Animal Planet, Rachel Carroll, a master’s student in the Wes Warren lab at Bond Life Sciences Center, has known one thing about what she wanted to do for a living.

“I just decided that I wanted to find a career where I could work with animals,” Carroll said. “As I got older, I realized that there are a lot of things affecting our planet that are causing some of these animals and ecosystems to disappear. These ecosystems are important, and their disappearance really refined my idea of what it would mean to work in the wildlife conservation field and the importance of it.”

Carroll initially graduated with a degree in Animal Sciences with a minor in Captive Wild Management in 2017 from Mizzou. In her three years since, she was able to gain experience out in the field. Carroll began by working in the education department at the Sea Life Aquarium in Kansas City before getting an internship at Clearwater Marine Aquarium in Florida, where she aided in wild animal rescues as a part of the Marine Animal Rescue Team.

These were not typical animal rescues. She focused on manatee and sea turtle rescues, taking sick or injured animals back to the aquarium to bring them back to health.

“One rescue in particular that was very interesting for me was a water-based rescue. We were in a boat with the Florida Fish and Wildlife Services and we were trying to drop a net so we could catch a manatee that was pretty sick and carry it into the rescue van to drive it off to the rehab facility,” Carroll said.  “It was pretty exciting but a little nerve-wracking because the captain of the boat was telling us, ‘Be careful because there’s a lot of [sting] rays and sharks in this area, so watch where you land when you jump out.’”

Despite having to watch out for dangerous animals, Carroll enjoyed the field work.

“I just love the manatees, they’re so cute and fun to work with. It was really rewarding whenever it was a successful rescue mission because that didn’t always happen, unfortunately. I really liked being able to be part of the conservation work in that aspect,” Carroll said.

Manatees used to be on the endangered species list in the United States, however in 2017, their status was changed to ‘threatened.’ These large, squishy animals are commonly found on the coast of the southeastern United States.

“The manatees were definitely my favorite,” Carroll said. “Being able to work with them has been super interesting and because they’re still a species of conservation concern, I still felt like what we were doing there was super relevant for them.”

One of Carroll’s projects looks at multiple ocular coloboma in snow leopards. This rare congenital eye anomaly causes the eye to stop growing before it is fully developed. Its cause is unknown, and Carroll is investigating potential mutations that could provide a genetic explanation for why it occurs.

She also works on a project on transitional cell cancer (TCC), a rare bladder cancer, found in older fishing cats. These spotted, medium-sized cats are found in southeast Asia and are currently endangered. Like multiple ocular coloboma in snow leopards, the cause of TCC is unknown in fishing cats. In addition to looking at TCC, Carroll is also compiling a reference genome assembly for fishing cats that can be used for future studies in regards to disease and population.

“Hopefully, this can be used for better captive population management in the future, which will benefit genetic diversity for the global population as a whole,” Carroll said.

While she is not getting the same hands-on experience as she did in the field, Carroll has been enjoying seeing the other side of conservation work in the lab.

“From the research side of it, we’re not handling any animals,” Carroll said. “Obviously, we don’t have any snow leopards inside the lab. That’d be a little hard to do, but it is really cool because the work that we’re doing is impactful in a different way.”

Carroll still has a long way to go in these projects. The Warren lab recently began receiving samples from other zoos and facilities. With these samples, they are able to begin sequencing genetic information.

In the meantime, Carroll has been enjoying her time back in Columbia with her dog, Willow. She affectionately calls Willow “insane” and “sweet.”

“She’s so sweet and loving that I can overlook her scatterbrain,” Carroll said. “Everyone always tells me that she looks like a miniature Scooby Doo.”