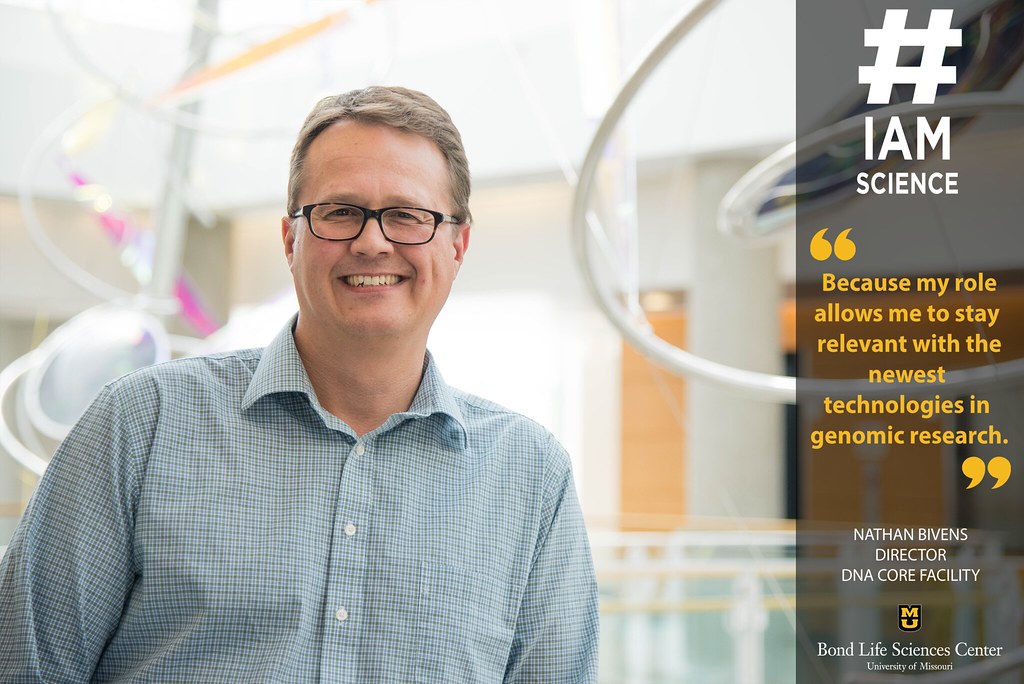 With water up to his waist, Nathan Bivens is in his element fly fishing as he waits for a trout to grab onto the end of his line.

Bivens picked up this hobby growing up in his hometown of Cassville, which is also where his path to the Bond Life Sciences Center began. The Genomics Technology Core Director is the kind of person who will always be there when others need him.

“I really enjoy working with a variety of researchers across campus,” Bivens said. “My role and work in a core facility allow me to interact with hundreds of researchers…And they’re just doing some great science.”

Leaving southwest Missouri in 1990, Bivens went to MU to get his bachelor’s in molecular biology. After completing his master’s at the University of Illinois in 1997, he applied to the university’s Center for Comparative and Functional Genomics to coordinate high throughput DNA sequencing projects.

Two years later, he and his wife moved back to Columbia. After working as a senior research specialist and associate director at MU, Bivens became the Genomics Technology Core Director in 2018.

The Genomics Technology Core facility is an institutional resource to educate and assist researchers in the use of sequencing technologies. Its services employ revolutionary advances in next-generation DNA sequencing to enable the sequencing of genomes and transcriptomes from whole organisms down to a single cell.

“Twenty-five years ago, when I started doing this, the technology was completely different,” Bivens said. “I’ve seen technologies come and go, but it’s always exciting because I have the opportunity to learn something new. It keeps my mind active.”

The genomics revolution has promoted the development of the technologies currently used to answer today’s research questions. Short-read sequencing platforms now provide billions of sequences in a single run at a fraction of the cost of previous technologies, which drives the discoveries being realized in the fields of personal genomics and basic research.

Many scientists rely on the Genomics Technology Core to help advance their research.

“In this position, I have the opportunity to interact with many different folks on a daily basis,” Bivens said. “It’s always helpful, and I enjoy that.”

Even beyond clients and collaborators, Bivens helps others with his time, knowledge and advice.

“Nathan is one of the wisest people I know,” said Sam Bish, senior technology transfer manager in the Technology Advancement Office. “He’s very soft-spoken, doesn’t talk himself up and puts others first.”

Before Bish realized they worked in the same building, he first met Bivens at the Open Door Church more than six years ago. At the time, Bivens was a deacon at their church and now serves as pastor of the church.

“He’s someone that I often go to for advice, mainly about life, but for work as well,” Bish said. “I trust that he’s not going to lead me down a path that he wouldn’t go down himself, meaning that he’s not out for his own personal gain. He’s only looking to help me.”

Another big part of Bivens’ life is his family. He spends a lot of his time taking his daughter to her volleyball practices and volunteering as a line judge during games. He and his wife even help her with her small cake business.

“The thing I admire in Nathan most is how good he is as a parent to his daughter,” Bish said. “She didn’t become an amazing baker and cook on her own, but he and his wife saw that was her interest and they’ve poured in resources to help her grow in that area.”

Looking back at the past 25 years, Bivens appreciates the work he’s done both in and out of the lab.

“I know many of our researchers feel that the core facilities are an asset to the work they do and that they do view us as essential for research at MU,” Bivens said. “So that, to me, gives me a sense of pride.”

Whether it’s help on a genomics project or parenting advice, Bivens knows how to be there.

From developing a question to discovering a potential solution and putting it into practice, the journey from research to practical application is a long one. Nevertheless, each step brings that solution one step closer to reality.

Shift Pharmaceuticals — the brainchild of Bond LSC’s Chris Lorson — has taken another of those steps with a new patent issued last month and meetings with the Food and Drug Administration in October 2019.

Lorson — a Bond LSC primary investigator, professor of veterinary pathobiology and associate dean for research and graduate studies for the College of Veterinary Medicine — co-founded Shift three years ago in March 2017 after Lorson’s lab had a breakthrough in his research on the genetic disorder, Spinal Muscle Atrophy (SMA). He worked with Mizzou’s Technology Advancement Office and entrepreneur-in-residence Steve O’Connor to dive into this business endeavor.

“Mizzou does a great job of supporting entrepreneurial activity, and working with Sam Bish has been astounding,” Lorson said. “He really lowers the hurdles and helps take care of the business stuff on the MU side.”

After developing the new technology, Lorson went to Sam Bish — the senior licensing & business development associate in the Technology Advancement Office (TAO) within the Office of Research — to help protect the discovery. As a faculty member, Lorson shares the rights to his discoveries with the university since he used its resources and funds. The initial funding for this project came from Cure SMA, a non-profit patient advocacy group focused upon SMA. Through licensing and patenting the technology, Shift is allowed to commercialize it even though the university owns it.

With the university’s help, this product moves closer to the clinic and those with SMA are a step closer to healing.

SMA is a genetic disorder that develops in children missing the survival motor neuron-one gene. The disorder is the leading genetic cause of infantile death worldwide and causes muscle weakness, respiratory failure and premature death.

SMA is caused by the loss of a gene called SMN1. Humans have a “back-up” copy called SMN2. SMN2 does not make enough SMN protein to prevent disease but has been the focus of considerable interest for drug development within the SMA field. The compound that the Lorson lab developed targets SMN2, causing SMN2 to be “turned up” so it makes high levels of SMN protein, like SMN1. In pre-clinical models, a single dose can extend survival ~800%.

The compound is an antisense oligonucleotide (ASO), which is a synthetic string of nucleic acids that bind to a sequence of the SMN2 gene. Normally SMN2 produces a protein that has an important region that is missing. This compound forces SMN2 to make the “normal” full-length protein which would prevent disease development.

Highlighting the promise of personalized health care and the impact of large-scale interdisciplinary collaboration, this type of research is part of the University of Missouri System’s bold NextGen Precision Health Initiative. The NextGen Initiative unites government and industry leaders with innovators from across the system’s four research universities in pursuit of life-changing precision health advancements.

“The university is not in the business of selling products. That’s just not what the university does,” Bish said. “The goal with every university technology disclosed to TAO is to get industry to commercialize it. This is what I call the ‘Three-way win.’”

The company wins because they produce a commercial product. The license helps money go to the university, and the university shares some of what they received with the inventors.

Now, Shift is at the commercializing stage.

“Everything before 2016 was to find the lead compound,” Lorson said. “Everything after 2016 is to prove that it’s safe and efficacious.”

Shift still needs to further develop the technology prior to submitting it to the FDA and starting clinical trials.

Luckily, it’s not expected for a company to fully develop a product to the market. Big pharmaceutical companies often partner, acquire a company or license the technology after a start-up like Shift Pharmaceuticals does the legwork to show progress and potential.

Bish attributes the success to the amount of money, or non-diluting capital, Shift has raised and how Lorson created the company.

“Dr. Lorson was very smart in the way he went about this,” Bish said. “He realized he needed partners to get this company on its feet. Some people will say, ‘Well that shows weakness. You didn’t know how to do it on your own.’ To me, that shows wisdom and strength because nobody knows his science like he knows it, but there are other people that know business and what it takes to get successfully launch and develop a biotech company that he may not have.”

Even though Shift has far to go to make the new technology available to those with SMA, Lorson recognizes the work that has gotten him and his team to this point.

“Having been in the field for 20 years, it’s exciting to see it developed,” Lorson said. “Having known many families with SMA and getting to see them every year for 20 years, it’s exciting to see progress being made in addition to all the other stuff that’s being done by many other labs and companies. I think the interactions between SMA researchers and SMA families is one of the most exciting parts of my job. It permeates what I do every day, and I try to instill that into the lab every chance I get.”

This research is an example of how the NextGen Precision Health Institute at Mizzou is expanding collaboration in personalized health care and the translation of interdisciplinary research for the benefit of society. Partnering together with government and industry leaders, the NextGen Institute empowers bold cross-disciplinary innovation and life-changing precision health advancement targeting individual genetic, environmental and lifestyle factors. The work of the institute is a cornerstone of the University of Missouri System’s statewide NextGen Precision Health Initiative.