The discoveries from research capture the public’s and other scientist’s attention, but what about the tools, instruments and data management systems that provide more efficient means of getting there?

A new genome sequencing instrument is on its way to the Bond Life Sciences Center thanks to a Tier 1 grant from the UM system’s mission to enhance the ‘well-being for Missouri, the nation and the world through transformative teaching, research, innovation, engagement and inclusion’.

Wes Warren, primary investigator in the Bond LSC, led the effort to speed up the turnaround time for genome sequencing and lower the overall cost. The proposal for NovaSeq instrumentation additionally includes purchasing more data storage to keep up with researchers’ demand for the technology.

“This is an issue that has been noticed in the last three or four years around being able to generate the data in a high throughput fashion. A lot of our genomics researchers were required to seek these services off-campus,” said Nathan Bivens, Director of the DNA Core. “As part of this strategic initiative, we saw an opportunity for campus to invest in this instrument, make it available and then continue to build our own genomics resources here on this campus.”

With his experience with the McDonnell Genomic Institute at Washington University in Saint Louis for the past 17 years, Warren was the person to lead the charge in bringing this technology to MU.

“I was involved in some of the later stages of curating the human genome and I’ve been involved in many genome sequencing efforts at the McDonnell Genomic Institute, not only that but high-throughput sequencing in populations,” said Warren. “My work mostly revolved around comparative genomics. The experience factor that I brought to this proposal is knowledge of how to do high throughput sequencing and how to curate the data.”

Since the first human draft genome in the 90’s, there have been constant developments in sequencing technology to speed up the process and to do so at a lower cost. Sequencing figures out the order of A’s, C’s,G’s, and T’s that make up the DNA nucleotides, or bases, that define a genome that codes to build an organism.

Genomic and single-cell sequencing machines are ‘disruptive technologies’ which allow scientists to essentially have a blueprint of all of the genes that make up any given organism. These blueprints can be used for a variety of scientific purposes to study issues ranging from cancerous mutations to drought resistance in plants.

The data being generated from such technologies is allowing researchers to better understand scientific complexities such as cancers.

“We have an Illumina instrument that’s a different type of format in terms of its capability. It produces fewer bases per flow cell and as a result of that it’s more expensive,” said Warren. “It’s simply a question of cost here; the technology of the NovaSeq has improved in terms of the base accuracy but the main reason is that with more bases per flow cell, the more experiments you can do.”

The current technology in MU’s DNA Core costs about 30 percent more to complete similar sequencing and takes longer. The new technology can complete thousands of sequences at once, which means it will generate the data needed for publishing discoveries in a more timely fashion.

This cost-effective high throughput technology will allow researchers across the UM System to increase the number of samples they can test and to find genes of significance and traits of interest at a much faster rate.

“Since 2008, we’ve continued to see an increase in the amount of data that’s being generated on campus and the number of publications that are resulting from genomics research and data and I don’t think that’s going to slow down anytime soon,” said Bivens. “In five to 10 years I think we will still be generating more sequencing data especially with the new NextGen Precision Health Institute here at MU. We’re seeing more and more growth in areas which are going to use this type of technology.”

Inevitably, housing this technology at MU will create a higher demand for sequencing through the DNA Core Facility. To keep up with the demand for this data, Bivens said the facility is purchasing more data storage, restructuring the lab and potentially looking for an additional hire to help process the workload.

As for when the technology will be installed on campus and the DNACF personnel trained to use it, Bivens hopes to be ready to receive samples at the end of September, beginning of October.

This instrumentation is funded by the UM System’s and all four campuses strategic investment for research and creative works.

A program that pushes science forward

May 16, 2019 By Danielle Pycior in Uncategorized Tags: DNA Core 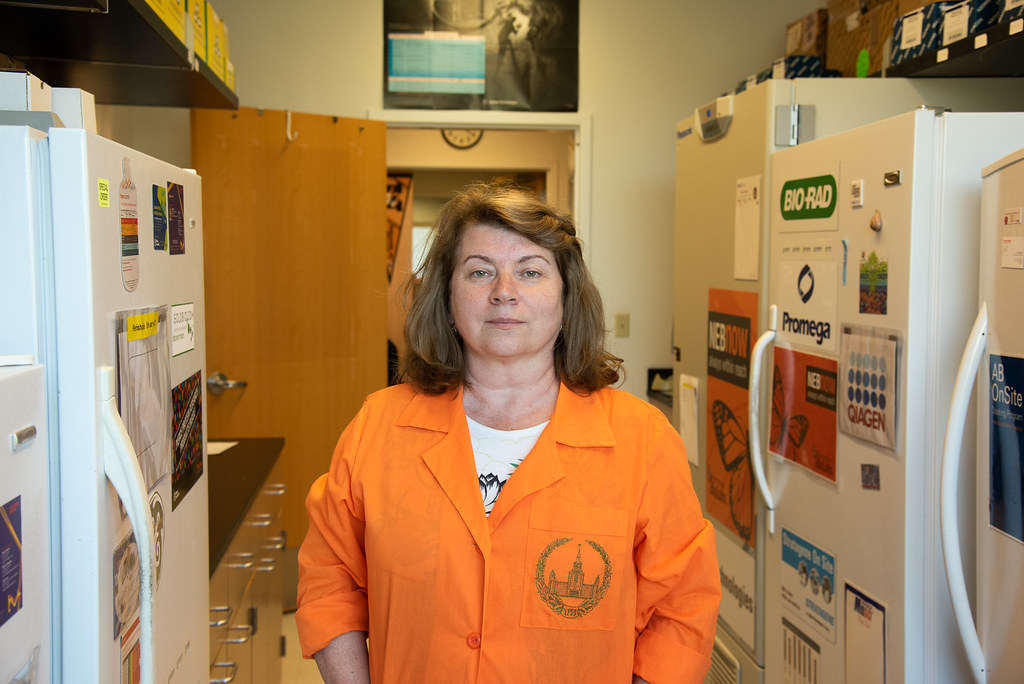 It’s the little things we take for granted, and for science experiments, one of those are enzymes.

French chemist Anselme Payen discovered the first enzyme, diastase, in 1833, but it wasn’t until 1877 that the word enzyme was used. While it’s a compact name, it’s really a category of proteins produced by living organisms that speed up chemical reactions regardless of whether it’s in the body or the test tube. The way these proteins are folded make their chemical interaction very specific, but when they bind with the right molecules, they speed up reactions hundreds or thousands of times. Since their first discovery, researchers have found thousands more enzymes that play an integral role in even more scientific discoveries.

A program on the second floor of Bond Life Sciences Center gives scientists the small something they need to make those discoveries. The Enzyme Freezer Program — part of the MU DNA Core— began in the 1990s and has grown to provide enzymes for 120 different labs across the University of Missouri campus.

Though it has become a staple in the science community, allowing researchers to walk down the stairs or make a call across campus to find what they need, this convenience helps quickly and quietly move science forward.

“Modern research requires a lot of expensive things,” said Kate Shipova, freezer program specialist. “For end-users, it’s convenient because they can come and buy something immediately.”

Shipova spends her days talking with sales representatives and vendors, fixing problems and finding researchers the substances they need to continue searching for answers. The lab is lined with refrigerators and freezers, all stocked full of substances used every day in labs around campus and around the world for anything from genome sequencing to nucleic acid purification.

Nowadays, it’s normal to have fairly easy access to any substance scientists may need for their research, but generations ago this would have been difficult to imagine. Walter Gassmann, Bond LSC interim director and professor of plant sciences, recalled visiting a colleague in Morocco who works for its government. She has to order everything she needs for her lab an entire year in advance, while MU researchers can get what they need on a whim if needed.

“I think it’s too easy to take things for granted that was more work before, and this really accelerates your research,” Gassmann said. “It helps not having to plan far in advance.”

The program has numerous chemicals in stock and the ability special order almost any enzyme a researcher may need, shipping it for free and at a discounted price. Nathan Bivens, assistant director of the MU DNA Core, said most of the chemicals are used for molecular biology or proteomics research, so the common reagents they keep in stock work with RNA and DNA.

“It’s really an advantage to a researcher who wants to make that grant dollar stretch since it’s a much more affordable option,” Bivens said. “Plus, it’s here and readily available. You have the ability to come here and get the reagent quickly.”

In many parts of the world, researchers aren’t so lucky to work in a place with resources this readily available, with a staff dedicated to helping. Shipova and Bivens work to make researchers’ lives easier by providing the chemicals they need at an affordable price, and scientists such as Gassmann appreciate all of the hard work they do.

“In other countries, an enzyme has to be shipped, and it can get stuck in customs and it doesn’t get treated right. Here things are so much easier.”

What was once only a dream for scientists who couldn’t so readily access the tools they need is now a common and easily accessible program. While new technologies and methods continue to take the spotlight, freezer programs and those who run them will continue working in buildings like Bond LSC to quickly make reactions happen.