A scientist steps away from the bench

After 40 years of hard work, it is finally time for David Pintel to pass the torch. 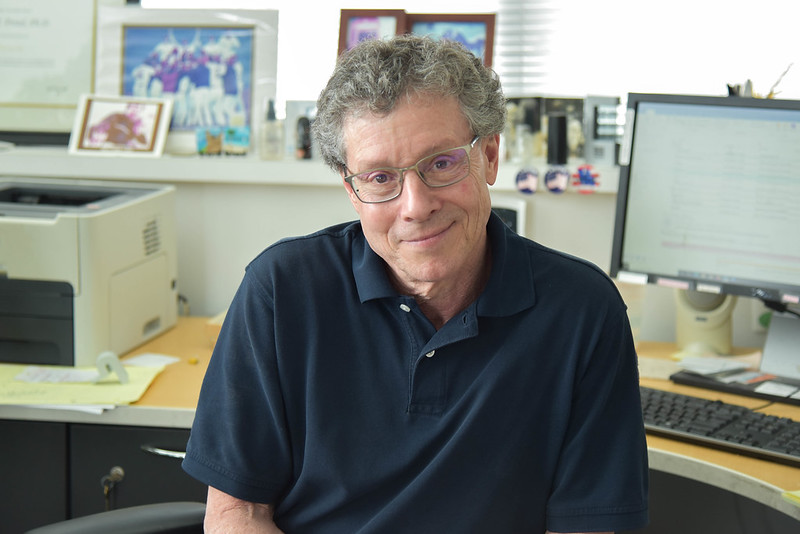 Dr. David Pintel, retiring after 40 years at Bond LSC, takes in his office during his last week at Bond LSC. | photo by Davis Suppes, Bond LSC

David Pintel is hanging up his lab coat after 40 years.

“It’s been an honor to be able to do my work at the University of Missouri. I’ve had a great group of colleagues both here and at the medical school,” Pintel said.

The Bond LSC virologist retired July 1 after a storied career. He spent 20 years at the School of Medicine before joining Bond LSC upon its completion more than 15 years ago.

Since then he has aimed to better understand the interaction between viruses and host cells. Pintel specialized in the study of parvoviruses, the smallest of all DNA viruses that infect vertebrates. In addition, the parvovirus adeno-associated virus (AAV) has been developed as a promising gene therapy vehicle.

On his last official day in his office Pintel was busy still packing up old memories while taking everything in.

“I’ve had tremendous students and tremendous colleagues, you know they were the important parts of my career,” Pintel said, “Going through all the old memories, you know, it’s gonna take a little while”

Pintel is a Curators’ Distinguished Professor as well as a Dr. R. Phillip and Diane Acuff Endowed Professor in Medical Research Molecular Microbiology and Immunology. He reflected on fond memories of his work here, but when asked what his favorite memory was his answer was the same, working with all of these people.

“It’s an emotional end, when you do something every day of your life for 40 years,” Pintel said. “I’m so thankful and grateful for the people that have worked with me, people that have been my friends here and allowed me to have a successful career.”

The future for Pintel will come in due time, but for now he is in no hurry and plans to enjoy some time off.

“To be determined,” Pintel said, “I think I will decompress for a while before I make any decisions on the next step.”