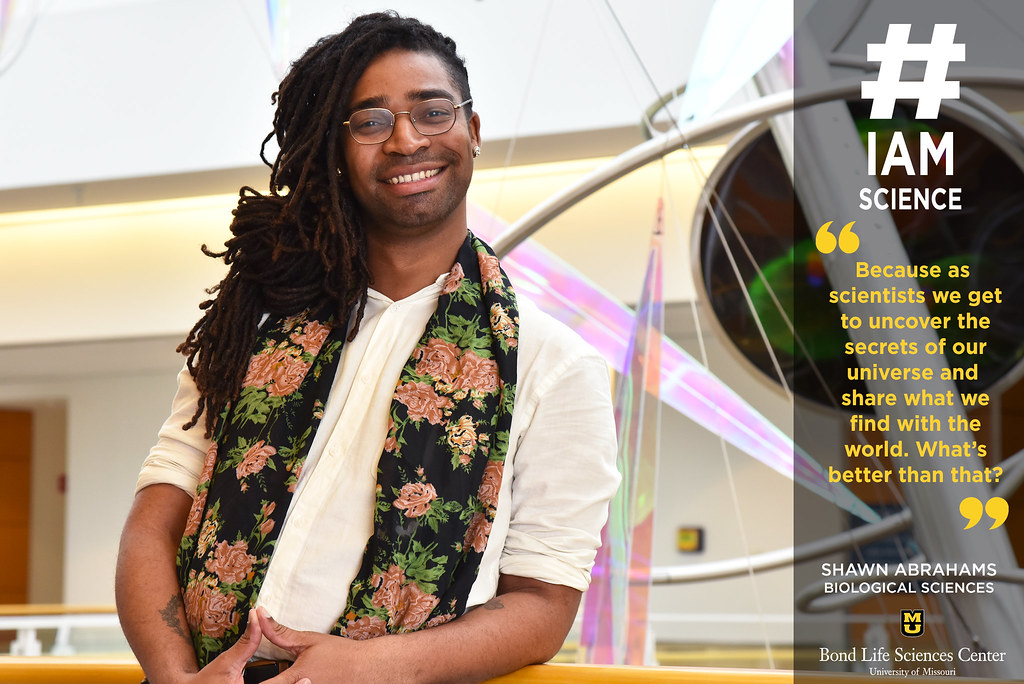 “Eccentric” is generally a word you do not want to use for a future boss.

But that’s what led Shawn Abrahams to the Chris Pires’ lab at Bond LSC. Abrahams first met Pires at the Botany 2013 conference in New Orleans.

“If you have ever met Chris before you know he is full of advice. At the time Chris told me about his expectations for grad students, how many papers you should have to be successful and that you should always be considering your 10-year plan,” Abrahams said. “I appreciated it as an undergrad who knew very little about what it took to become a research professor, but I thought to myself, ‘I could never have him as an advisor,’ a bit taken aback by his intensity.

Pires stuck out in Abrahams’ mind from countless other researchers who they had met at the conference.

Abrahams has been in the lab since the summer of 2015. The lab’s overarching theme is plant evolutionary biology.

“I work in the Brassica part of the lab, and I focus on a tribe of plants in the mustard family that includes about 227 species,” Abrahams said. “My big thing is trying to figure out how they have evolved certain traits within their group, particularly how gene duplication has contributed to some of these novel traits. Understanding their evolution is important for society and agriculture, but it also lets how know how we might expect plants to evolve in the future.”

Glucosinolates, or mustard oils, are an example of one of these unique traits. While most people know these compounds for the taste they give to wasabi, horseradish, or the yellow mustard we put on hot dogs, these compounds are used by plants to defend themselves and can have other effects. Some act as anticarcinogens in humans while others found in wild species are linked to upset stomachs and negative effects.

These evolved defenses are not always exclusive to a family of plants. This convergent evolution happens when organisms developing similar traits to another unrelated organism, and is of particular interest to Abrahams said.

“Some obvious places of convergent evolution are bats and birds who both have wings and fly but they have evolved those abilities separately,” Abrahams said. “In the tribe I work on, you have diverse mustard oils in groups that have been separated for millions of years of evolution, and you see this with some other traits as well. Did you know there are varieties of cauliflower that have been shown to have nicotine in them? But how did it evolve and what is it doing for the plant? Those are the questions I’m after.”

In the beginning, they found them self in a loop thinking constantly about where their research would take them next.

“I would say when I started in the lab I was very focused on how I get to the next step,” Abrahams said. “But if you just focus on the big picture you miss a lot of the details, and I have tried to enjoy the process just as much as the end product. If you are trying to build this as a career, you need to think about what motivates you. Why do I want to run a lab or would I be happier in industry? It is important to understand that for yourself.”

Before coming to MU to pursue their Ph.D. they went to University of Florida for undergrad, where they were involved in three labs. Afterwards, Abrahams experienced life outside of the lab.

“After graduating I did a one-year internship working in the everglades,” Abrahams said. “We looked at how sea level rising was affecting plant communities. Especially as a born Floridian I got to know the environment like very few do. You really get to physically interact with the local environment and understand nature.”

Their internship was physically testing, but the experience is something they carry with them in their daily life.

“I found working in the field was super rewarding but also very back breaking,” Abrahams said. “With 12 hour days working in the hot sun and gator filled marshland, you could potentially die from dehydration. When I entered my Ph.D. I took part of that experience with me. Techniques I used in that research to design mesosums, or artificial environments, came in handy when I wanted to test some ecological interactions.”

Experiences, conferences and people have all aided in Abrahams’ pursuit of their path in science. While Abrahams current life goal is to become an academic, they will be leaving MU in February to continue research in the Netherlands at Wageningen University. This opportunity stemmed from connections made at conferences and through a grant opportunity from the NSF Graduate Research Fellowship Program. They are hoping this experience will inspire new directions for their research and exciting discoveries.

“Science is a global human enterprise,” Abrahams said. “Getting the chance to really engage in that feels like I’m reaching a new level. It’s great.”

Story Note: Abrahams uses gender neutral pronouns them/they/their, which have been used in this article.