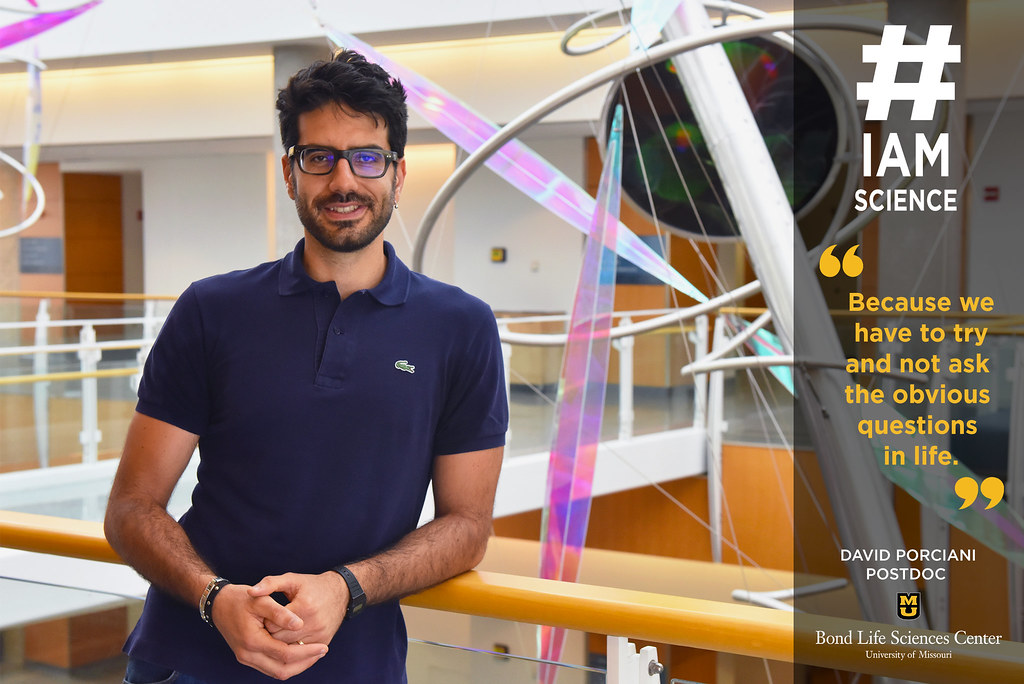 David Porciani was inspired into a science career.

Growing up along the Mediterranean Sea in Livorno, Italy, Porciani was fascinated with all different types of science, until he met two high school mentors.

“They inspired me,” said Porciani, who now works in the Burke Lab at Bond LSC. “They were both chemistry teachers, and I have always been fascinated with studying chemistry in biological systems.”

One of his mentors words to him stuck with him and shape how he decides what direction to explore.

“He said try to ask yourself not obvious questions,” Porciani said. “I realized I wanted to do that even though I was so young.”

After high school, Porciani stayed in Italy and studied pharmaceutical chemistry and technology, but during his Ph.D. in Molecular Biophysics, he came to MU for one semester and met Don Burke.

“In Italy, there are many good research teams. However, because the financial resources are limited, these teams are, sometimes, not very collaborative, thus limiting the progress of science” Porciani said. “In contrast, MU encourages you to do collaborations and I learn a lot from our collaborative teams. If you are good in one thing, you can find someone else in another field for working together to both achieve a goal. This increases the impact of the overall research.”

When Porciani finished his Ph.D., Burke offered him a job in his lab. Porciani is studying “smart” ways to detect and treat cancer cells in the Burke Lab.

“Most of the therapeutic drugs are not able to discriminate the cancer cells among the healthy cells,” Porciani said. “They are killing both cells, and the treatment can have harsher side effects than the cancer itself. I am trying to develop smart molecules that can bind with high affinity receptors that are sometimes uniquely expressed on the surface of cancer cells, thus representing a cancer signature. The idea is to use these aptamers as vehicles to deliver chemotherapeutic drugs or diagnostics”

After two years in the Burke Lab, Porciani and others recently published their work in Nature Communications, a victory for Porciani and the lab.

“When I published the paper, I was like ‘yes! I made it,’” Porciani said.

Porciani still keeps in touch with his mentors, but now he is in their same position.

“I have the chance to mentor and share my passion with students,” Porciani said. “I am learning from them too, it’s continuously pushing yourself beyond the limits. I put myself in a challenged position. They help me do my research and this really inspires me.”