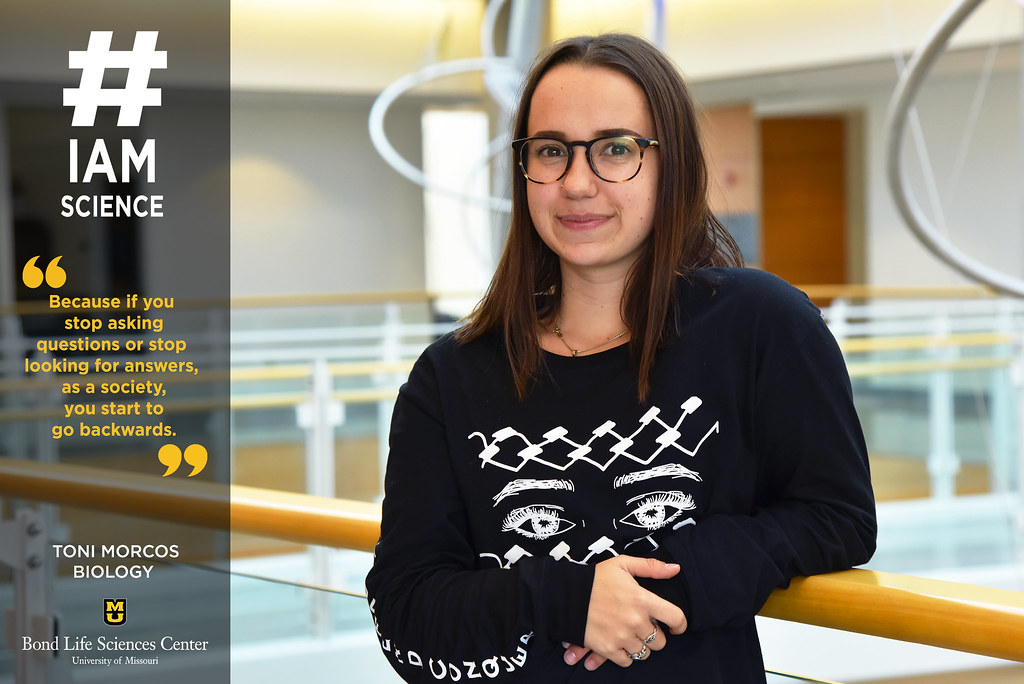 Science and spaghetti are an unlikely combination.

For Toni Morcos, this combination led her to research.

“Growing up, my dad researched muscular dystrophy and my mom was an OB-GYN,” Morcos said. “Every night, my mom would talk about her surgeries that day then my dad would talk about this gene targeting thing. I would be eight years old, just eating spaghetti wondering what the heck they are talking about. And now I’m here studying biology just to understand and be a part of that dinner table conversation.”

Morcos is more than just understanding what the heck they were talking about. Working in Chris Lorson’s lab at Bond LSC, she studies spinal muscular atrophy (SMA). SMA is a genetic disease that most often affects the nervous system of children, causing muscle movement to deteriorate and leads to death.

“Most of what I do in the lab is work with the mice; we study them by injecting them with these different quantities of treatments and chemicals,” Morcos said. “They are naturally sick with SMA. I weigh them all and track their weights and track their outcomes to see how they do.”

This research means creating new treatments to help those affected by SMA to save more lives at a sustainable price.

“There is one treatment that is on the market and they have a monopoly,” Morcos said. “The last figure I saw for it was around $500,000 annually per patient, and no one can afford that. We can’t even, as college students, fathom that much money. It is really important to get another treatment out to drive down costs so more lives can be saved.”

Morcos’ family dinners may not have been like most families, but those talks over spaghetti caused her to advocate for others and science.

She plans on going to medical school where she wants to help those in the health care system. In that light, she studies Arabic alongside biology and currently volunteers through refugee and immigration services. As an in-home tutor she teaches English to refugees and helps them become more culturally educated on American systems. And one of the most difficult of those systems to navigate is the health care system.

“There are translators, but sometimes they’re incorrect,” Morcos said. “I don’t understand everything the translator says in Arabic, but a translator once told a kid to take Tylenol when the doctor said ibuprofen or Advil. That kind of difference is small, but when I can catch something like that you don’t know how often that’s happening.”

This pursuit of new knowledge and desire to understand drives Morcos in life.

“If you stop asking questions or stop looking for answers, as a society, you start to go backwards,” she said. “A problem we have now is people not wanting to know the answers. It’s beyond the lab, its beyond research, people have stopped asking the hard questions and get stuck in their ways. Change isn’t a bad thing, it’s progress. That’s true in science, research and culture.”