November 15, 2018 By Erica Overfelt in #IAmScience 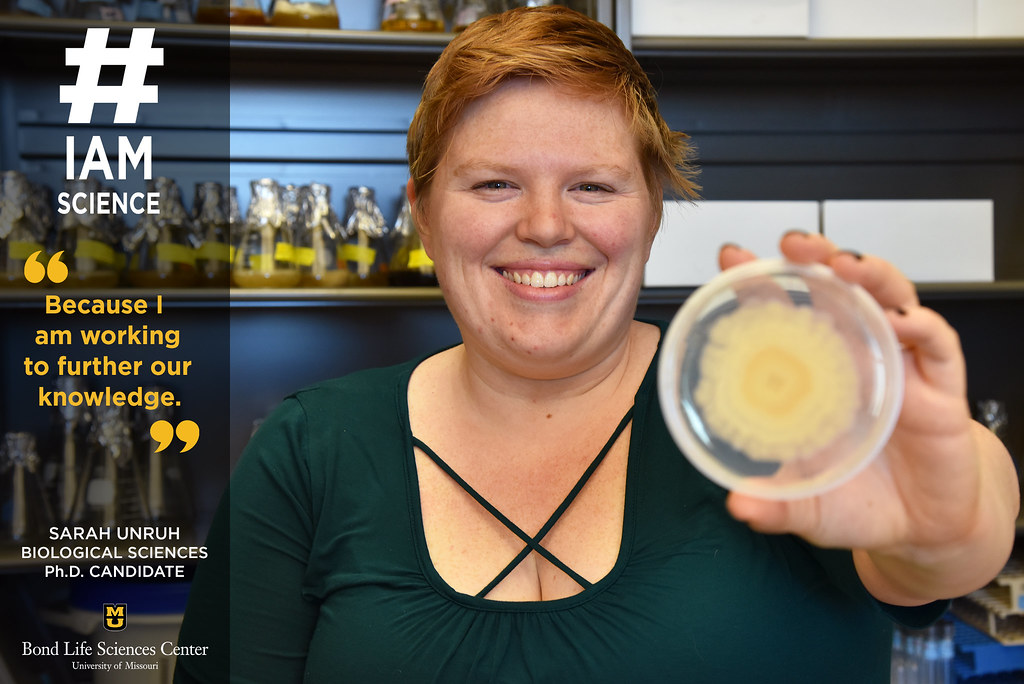 Orchids are just weird. No, like really weird, even bizarre.

“Name me a plant rule and I can tell you how orchids have broken them,” Unruh said. “Not all of them have leaves, a lot grow on top of trees and some grow underground not requiring photosynthesis, but one of weirdest characteristics is that their seeds are very small and they don’t have a lot of the nutrition to get the plant started.”

That last property has led Unruh to spend years exploring a delicate interaction between orchids and fungi that give the plant what it needs.

I study the genomes of fungi that allow orchid seeds to germinate,” Unruh said. “Most plant seeds don’t really require extra stuff except for soil and water, but these fungi give the orchids carbon and sugars, which isn’t a thing fungi usually do.”

Understanding how orchids are out of the ordinary led Unruh down her scientific path. Before coming to MU, Unruh volunteered at the St. Louis Zoo in the education department in high school. She wanted to study something similar to ecology and conservation, but ended up doing a double major in biology and education. And then her path took a turn.

“If you had told me I would be studying orchid-fungal interactions that would not have registered,” Unruh said. “In the pursuit of being a K-12 educator, I just so happened to need to take a class on plant systematics taught by Chris Pires. It was toward the end of my junior year and I was starting to need to make decisions on what I would do after I graduated. One path was to student teach — what I originally thought what I going to do. The other path was to start working in a lab. I always wanted to do research but never quite found the right question to ask or group.”

“I started in the lab not really knowing which plants to study,” Unruh said. “Chris asked me what I wanted to study. I said orchids just because there are so many evolutionary questions we don’t know.”

After working on them for a while she realized there were a few difficulties orchids posed in the lab.

“They grow a long time, but are not easily maintained. The fungi seemed more interesting to me since I knew less about them and this is an area no one else is studying.”

And that lack of research made her really look at  exactly what this interaction, or friendship, means.

“It’s really not clear what on the molecular level is happening,” Unruh said. “We can assume this exchange of nutrients is happening, but we’re not sure what else is going on. If we can figure out that pathway, we can gain some insight into biological procedures and maybe use them instead of pesticides for agriculture, for example.”

This research has led Unruh all over the world including science conferences in Hong Kong and Costa Rica. Throughout her travels and collaborations, she has gained another tool for her research, Twitter.

“Twitter is a great tool to interact with others on a global scale,” Unruh said. “Not even specifically interacting but seeing the conversation. The people I meet at conferences I sometimes follow on twitter, or sometimes I follow people on Twitter then meet them in person.”

Unruh said the connection between science and her everyday life makes her think differently.

“Science is essential because even if you’re not in a lab,” Unruh said. “It’s about being able to approach the world how a scientist sees thing, if someone sees an argument what evidence is there. It’s thinking about the world more carefully.”

Seeing the world differently has opened new perspectives and motivations in her everyday research.

“I’m doing my part to create knowledge and further our knowledge on why it works,” Unruh said. “While working toward this answer, it’s really motivating trying to figure out this mystery.”