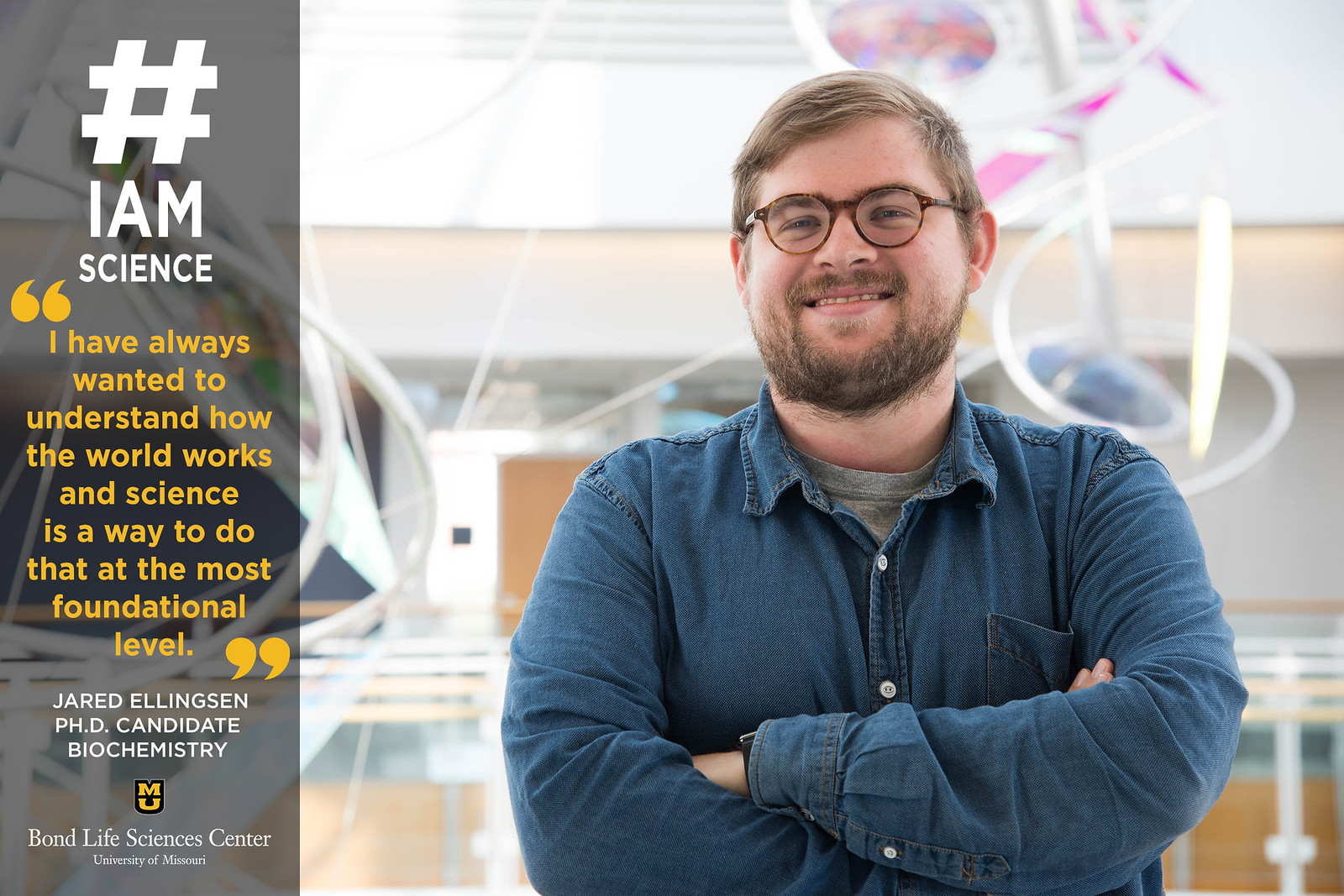 #IAmScience because I have always wanted to understand how the world works and science is a way to do that at the most foundational level.

Certainty hasn’t come easy to Jared Ellingsen, but in retrospect, his path to grad school in biochemistry has involved a long series of pieces falling into place.

Ellingsen began his freshman year as a humanities student at Wheaton College in Illinois, but he fell in love with chemistry after taking a required first-year course.

“According to my adviser I was the first person they had shift from biblical-theological studies to chemistry,” Ellingsen said. “Usually people switch out of science, not into science.”

Ellingsen’s drive to understand why things are or how things work has always been a part of his life.

“I have always wanted to understand how things work and chemistry in particular but science, in general, is the way we can understand the world at the most foundational level,” Ellingsen said. “I’m the kind of person who always wants to know things or understand things. Wikipedia is constantly bookmarked on my phone; I look stuff up all the time. Science is a way to do that but with things people don’t know yet.”

Looking back on the last 10 years of his life, the only unwavering life goal for Jared Ellingsen was to attend Wheaton College in for his undergraduate degree. But everything after has fallen into his lap.

“I had a lot of periods where I felt like I didn’t know what I was doing and then the right door opened up and I fell into the right thing, and, looking back, it all makes sense. It’s been a very clear path but getting there didn’t always feel that way,” said Ellingsen, a fifth-year biochemistry Ph.D. student in Scott Peck’s lab at Bond LSC.

Ellingsen was set on attending Wheaton College from an early age. From the age of four, his aunt promised him that if he attended school close to her, she would cook him dinner and do his laundry. So, for Ellingsen, when it was time to make a college decision, the answer wasn’t difficult.

And his aunt lived up to her word. Every Sunday Ellingsen’s aunt would cook him dinner and let him do laundry at her house.

Finding a school for his graduate degree wasn’t as obvious.

His parents moved to St. Louis while he was in school, so he knew he wanted to attend a university close to them. He applied to 12 schools, but Mizzou wasn’t on his radar until he came for recruitment weekend.

“As soon as I came for my recruitment weekend, I knew that this was where I was going to go. I didn’t need to go on any other visits, it was a perfect fit,” Ellingsen said.

Ellingsen enjoys the collaborative atmosphere and the support he receives from his department and his lab. While he came in knowing he wanted to study biochemistry, the support and mentoring he received during his first year led him to study plants in the Peck lab.

For his Ph.D. research, Ellingsen is studying how plants defend themselves. The Peck lab has identified a mutated variety of the model plant Arabidopsis able to defend itself better than a normal plant, and Ellingsen wants to know what is going inside the plant cells that provide it increased resistance against bacterial infection.

“We can move away from problems or if we need food, we can go get food,” Ellingsen said. “But plants can’t do any of that, they just have to sit there and deal with it in their own way, and I think that’s interesting.”

Within the next year Ellingsen plans to finish his Ph.D. After, he hopes to find a post-doc position in Europe and then eventually stay in academia, whether through research or teaching.

In his spare time, Ellingsen keeps up with his music blog, in which he reviews new songs and follows undiscovered artists to see how they develop.

His love for music began at the age of five when he started playing the piano. He picked up oboe in the fifth grade and slowly added on other instruments to his repertoire such as saxophone, clarinet, English horn and guitar. He kept up with music until his freshman year of college and then found that he didn’t have as much time to devote to it as he wanted.

Ellingsen attributes much of his current success to the discipline and responsibility he picked up through music.

“You have to be so dedicated practicing all the time, and it becomes all-consuming if you really want to be great at it,” Ellingsen said. “Being in grad school is very similar. Grad school is very much what you make of it, and if you’re not determined, putting in the hours and working hard, you’re not going to be making progress or do meaningful things.”

Even after years of being removed from formal practice in his music, Ellingsen still finds peace and relaxation by picking up his oboe or guitar from time to time.

« #IAmScience Yuan Yuxiang » A passion for teaching rooted in research