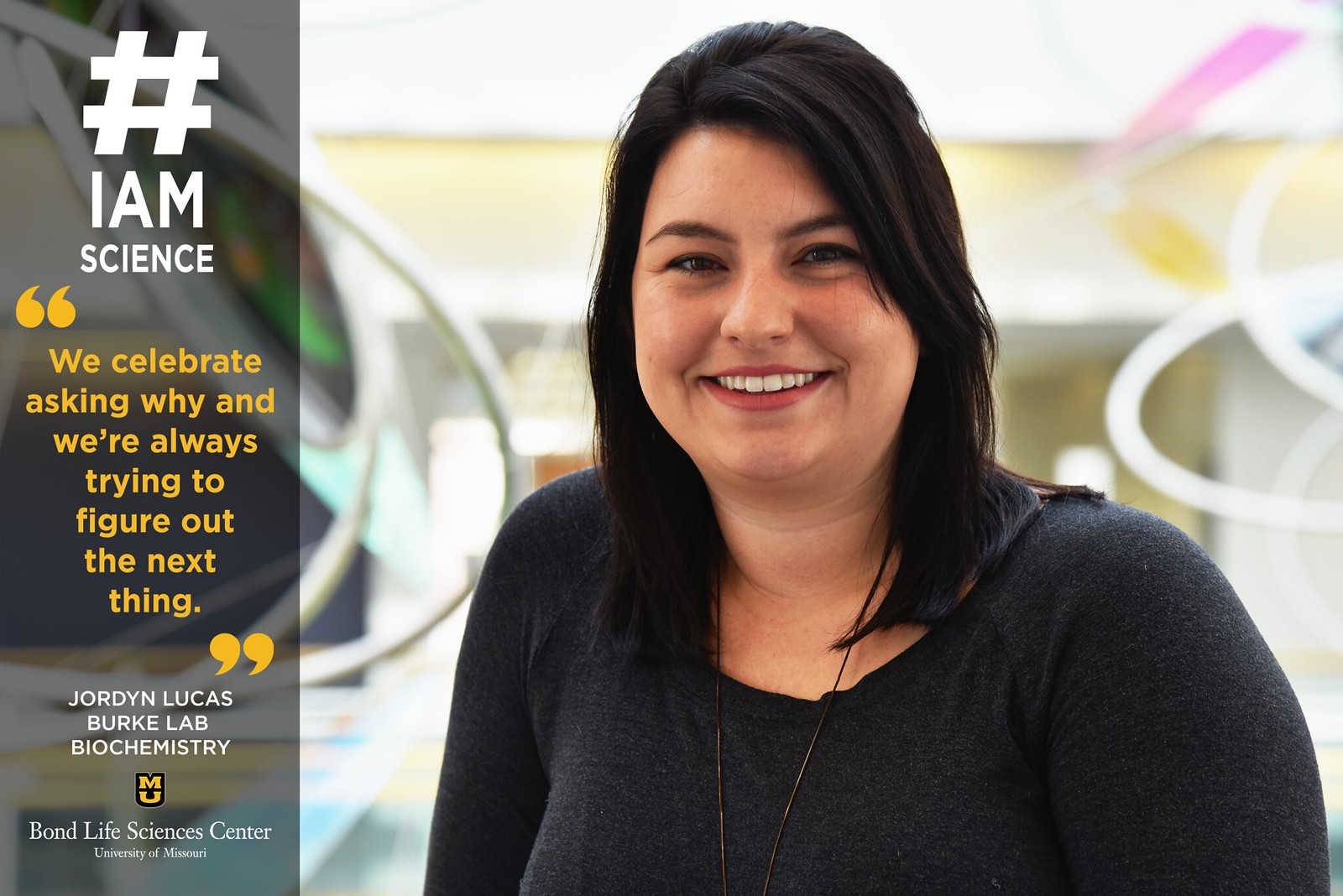 “We have this really cool grant from NASA that I’m working on,” she said. “We’re working with RNA to see if it would have been a good progenitor molecule for life, and testing the bounds of what it can do on its own.”

Her current research explores a topic that remains a mystery.

“No one else knows the answer,” she said. “So, when I find that answer, I’m the first one to know, which is really exciting to me.”

Lucas finds it fascinating how skills learned in a career can parallel into life. Her problem solving, building relationships with other scientists, being a part of a team, seeking criticism and overcoming failure have helped her become who she is. She said Burke’s diverse lab has also helped her gain new perspectives about research and about the world in general.

“A lot of scientists come at things one-dimensionally because that’s how they think, but when you’re forced to constantly interact with someone who’s coming at it from a different dimension, it helps you become multidimensional in your thinking,” Lucas said.

One of the biggest lessons Lucas has learned throughout her career so far is that criticism is a useful and healthy part of growth. It wasn’t always easy for her, especially in the beginning, but with time she came to realize that using criticism to her advantage enhanced her abilities.

“Actually, I seek it out because criticism makes you a better person, a better scientist, a better friend, and I think that a lot of people avoid criticism, but in this field, you have to cherish it,” she said. “This is a tough field and you want to get as much criticism as possible to make your research the best it can be.”

As a fourth-year biochemistry graduate student in the Burke lab, she focuses on how life evolved on Earth or could potentially evolve on other planets. Her field houses prebiotic chemists, geologists, geo biochemists, biologists and atmospheric scientists to name a few. She respects that diversity because there will always be a new answer to seek.

Though she originally went for biomedical engineering because of her interest in physics and chemistry, she realized she enjoyed science-heavy courses over math-heavy ones. By sophomore year at Purdue University, she had an internship in a microbiology industry lab and fell in love with research, eventually earning her undergraduate degree in biochemistry.

“I am always a person that wants to know why and science is a great field for that,” she said. “Not only do we kind of celebrate asking why, but it’s basically what the field is founded on – we’re always trying to figure out the next thing.”

In the past year, Lucas found a passion for communicating science to nonscientists to help them learn and find their own interest and curiosity. From Science on Wheels to meeting with a local rotary club to being on the Inside Mizzou podcast, Lucas has taken every opportunity to help people to learn. She said it’s important to build a healthier relationship with the non-scientific community.

“When I’m really having trouble with something I’ll bring it to a lab meeting and say, you know, guys, what do you think about this? Every single person has a great idea or thinks of a different control to use or a different approach to solve my problem,” she said.

Though her lab mates intellectually support her, she has also built lasting friendships here at MU. In October she ran a half marathon and trained for six months with a coworker. She also raved about Bond LSC, saying the open space and light allow researchers to make friends across labs and helps force them out of their spaces when they’re struggling with their research.

For Lucas, a great weekend entails being cozied up with a good book. She also loves to travel. Among traveling across the country for various conferences, she reminisced on a three-week trip to South Korea. Like most of her favorite things, she enjoys what challenges her to think differently.

She is excited about the future and its endless possibilities. Though she’s considering working at NASA or The Earth Life Science Institute in Japan, she’s staying open-minded.

« A return to mentor: Gant advises on PREP for Ph.D.’s» #IAmScience Mannie Liscum