Kamal Singh was in the town of Allahabad in his native India, preparing for competitive exams to become a government official. As he craned his head to the left, he saw a highly respected official getting berated by an arrogant and disrespectful political leader. While Singh always knew that, in these positions, one was under the government’s thumb to an extent, that incident was what sealed the deal for him and made him realize he did not want to spend his life simply taking orders and being subject to verbal abuse by corrupt politicians.

It was at that moment — roughly 30 years ago — he decided he wanted to dedicate his life to something more personally fulfilling: research.

Singh was raised in a small village in rural India. While his primary and high school education came from a military school, he obtained a Master’s degree in physics from Agra University, in Agra, the city where Taj Mahal is located. Still, Singh thought he wanted to work as a public official until that incident served as the last straw. After that, he decided to complete his graduate degree in quantum physics, and committed fully to a life in academia.

That led him to cross the Atlantic in 1994 when he moved to the U.S. and joined Rutgers New Jersey Medical School. He realized that now was his chance to focus on a different area of science that he had always been fascinated with: biochemistry.

“I taught myself everything from scratch in New Jersey,” he said. “I had always wanted to work with DNA polymerase, and I felt like now was my chance to really get involved with that.”

Over the span of 15 years in New Jersey, he occupied a number of positions including postdoctoral fellow, instructor and assistant professor. His work transitioned from research related to DNA polymerase to his current focus on Human Immunodeficiency Virus (HIV) and other viruses including Foot-and-Mouth Disease Virus, SARS and MERS coronaviruses.

That’s where Singh’s story came to Mizzou where he arrived in Jan. 2009. While he has always been highly motivated and driven by collaborations, the bread and butter of his work for more than a decade has come at the Bond LSC focused on HIV.

The goal of Singh’s HIV-focused research, in a nutshell, is to find drugs that bind to the active site of the enzymes that replicate HIV, thereby blocking the spread of the disease. According to Kyle James Hill, a postdoctoral student working in Dr. Singh’s lab, the function of his research is twofold: to better inform human understanding of the viral life cycle and to help identify novel targets of drug identification to potential treatments. 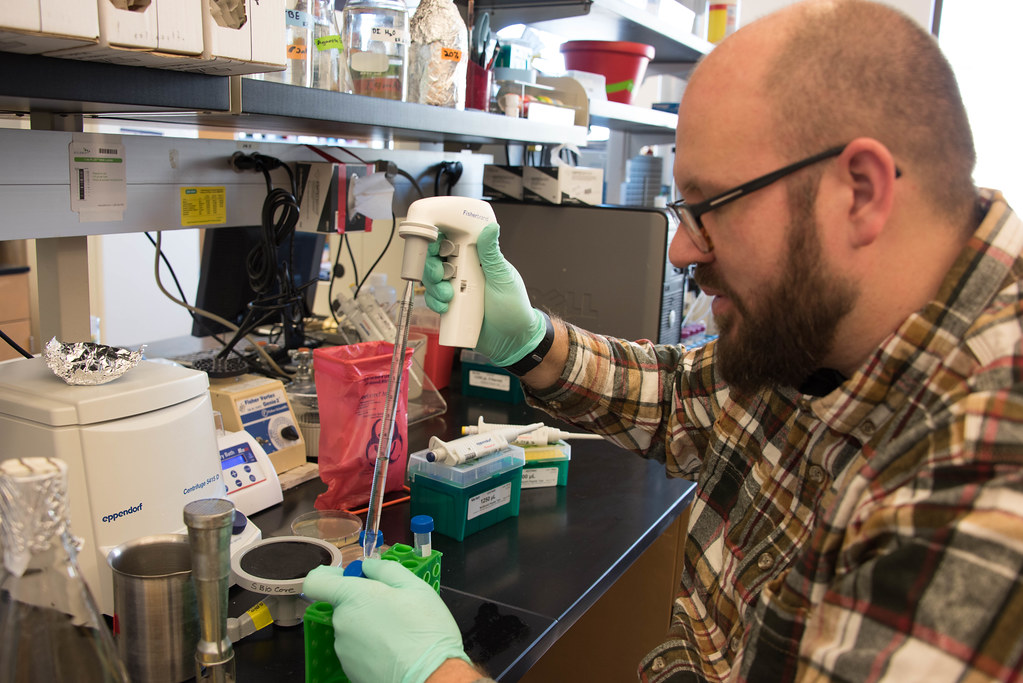 More precisely, Singh’s work is focused on enzymes/proteins that serve particular functions for the virus after the virus enters human body. Most enzymes have a suffix of -ase, and what comes before the suffix generally states the function of a given enzyme. For example, protease has to do with proteins, specifically the breakdown of proteins into smaller proteins or other subunits. Enzymes can have a positive function such as promoting growth and generation of muscle tissue, or a negative function, such as what happens when HIV highjacks their function for its own benefits. The HIV infection, in turn, weakens a person’s immune system and lowers his/her her ability to fight disease, in this case AIDS. Each enzyme has an active site, or a region where its specific function is carried out. All research that deals with enzymes, therefore, must center on what goes on at the active site.

HIV then uses another enzyme called integrase to insert viral DNA into the genetic framework of the host cell. This allows the virus to further embed itself in what was once a healthy cell. A third enzyme called protease breaks down long proteins into smaller functional proteins, and these smaller proteins then combine with the genetic material of HIV to infect another cell.

The practical application of Singh’s work is that it is focused on moving research toward tangible results that physicians, in turn, can use to better diagnose and treatment plans for patients. Singh’s current lab work focuses most of all on finding drugs that are able to work to treat HIV patients from different parts of the world.

Singh became interested in investigating why certain drugs designed to treat HIV in the developed world, have less effect on the particular strains of HIV that exist in low- and middle-income countries. To help him with this process, Singh developed a collaboration with scientists at the renowned Karolinska Institutet in Stockholm, Sweden. Singh is also an Associate Faculty member at Karolinska.

While HIV infects people all over the world, there are actually many different strains of the virus, and some strains are more abundant in particular regions of the world. According to Singh, there are 10 subtypes of the virus, and more than 100 hybrid or combined types of it. Some drugs treat a particular subtype better than others. If a given drug does not work to treat a particular subtype, then it is useless in terms of treating patients that are infected with that strain of the virus. According to Singh, most drugs produced in the U.S. treat HIV subtype B, which is most prevalent in the developed world. However, patients in many other parts of the world, such as India, South Africa and Brazil are infected with subtype C of the virus. Singh says that 95% of patients in India are infected with subtype C.

“Because these patients are infected with a different strain of the virus, they, in many cases, do not respond to the type of drugs that are traditionally given to patients in the developed world,” he said. “Our job is figuring out why they don’t respond to that particular drug, and then coming up with something that can more effectively treat them.”

This practical application of his work is what’s most rewarding to Singh. His lab is able to provide concrete results that physicians then apply when making decisions about how to best treat their patients. Based on Singh’s work, physicians can better determine which type of drug would most likely effectively treat patients infected with a specific subtype of the virus, also considering the specific set of genetic variations and mutations that the patient may have. It is in this way that Singh’s work makes a very real difference in the world, and that is ultimately what keeps him so passionate about his work.

“To be able to apply what I work on in the lab and see it at work in real patients is very rewarding for me,” he said. “I am able to see the entire process unfold, starting with the very basic biochemistry all the way to direct application to the patients. Seeing that I’m making a real difference means everything to me.”

« One step closer » A NEET Connection