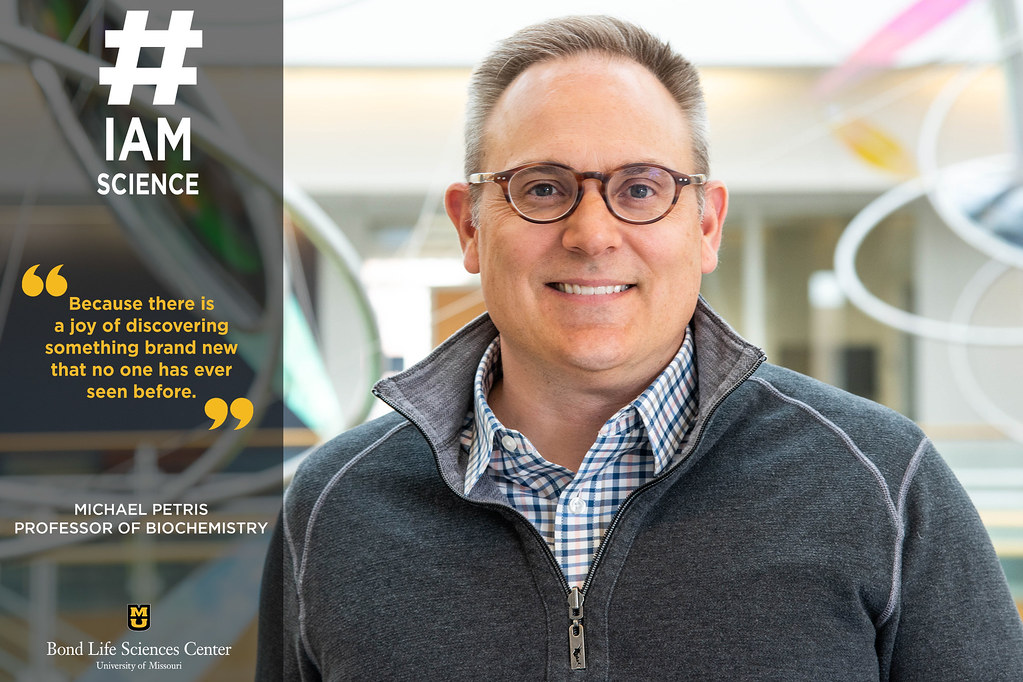 Growing up more than 9,000 miles away in Melbourne, Australia, Michael Petris never thought he would work at MU, especially since he could not even locate the state of Missouri on a map.

Now a professor of biochemistry, Petris was introduced to science early on in his life by his mother, who was a microbiologist and a high school science teacher, who made sure to immerse her children in the science field. He remembers growing up watching Australian wildlife documentaries and being interested in his science classes at school.

After completing secondary school (the Australian equivalent of high school), Petris obtained his bachelor of science degree in biochemistry and genetics as well as a Ph.D. in genetics from the University of Melbourne.

“I was studying the molecular biology of metal nutrition, which is the study of genes and biochemical processes that regulate metal nutrients in the body and how they’re important in disease processes,” Petris said.

A fax led Petris to Mizzou. While working on research as a post-doctoral student, a fax about a job opening at MU arrived in the lab. Petris decided to apply.

“I thought that I’ve got nothing to lose. It’s a tremendous experience to work in another country and to start a lab, and if I’m successful, terrific. If not, I can always go back to Australia and get a job,” Petris said, “This to me represented a once in a lifetime opportunity.”

After his interview, Petris went back to Australia where he later found out he got the position, and he has been at MU ever since.

Adjusting to the American lifestyle was both difficult and easy. There were a lot of things we take for granted that took some getting used to, such as driving on the right side of the road, different types of food, the reverse of seasons, and even being able to understand one another.

“I used to get a lot of people in the community having trouble understanding my accent, which was much stronger back then,” Petris said, despite English being the first language in both the United States and Australia.

Luckily for him, adjusting to the United States workwise was pretty seamless.

“The science side of it is universal. So that was easy,” he said.

Once Petris got his lab set up and running, he began focusing on the biology of the micronutrient copper and how it relates to cancer and infectious diseases. Currently, his lab is interested in developing a drug that can block the transport and delivery of copper to cancer tumors, thus reducing cancer growth.

Petris’ lab looks specifically at the function of copper in a family of enzymes called lysyl oxidases, which have well-documented roles in cancer. These enzymes make the tissue surrounding tumors denser, which encourages the growth and the spread of tumor cells. In diseases such as breast cancer, mammograms are used to detect this increased density in the tissue.

“The drug we’re developing blocks the movement of the copper into that class of enzymes so that we can block the potential for breast cancer and other types of cancer,” Petris said.

While a certain amount of copper is needed in order to stay healthy, Petris explained that by limiting the amount in cancer patients, “Their chances of relapse and the cancer returning are diminished.”

By focusing on regulating copper as a way to prevent cancer long term, Petris’ lab has developed a novel compound that blocks the transporter that takes the copper into the body.

“We’re hopeful that we can develop this small molecule into a drug that could be used therapeutically first in cancer, and, ultimately, for other types of diseases,” Petris said.

In fact, Petris and his Bond LSC collaborators, Dr. Kamal Singh and Dr. Vinit Shanbhag, have submitted a patent application for this compound so that it could be developed for clinical use.

Expanding his research even further, he recently began focusing on ophthalmology and the role copper has on eye diseases as well.

After living in the United States for over 20 years, Petris’ Australian accent is a little less obvious and he does not have to think twice about what is the correct side of the road to drive on. He is happy where he is at.

“Now my research is becoming more applied and translational, I’m becoming even more gratified with the science that I’m doing.”

« The Little Robot That Can » Shifting Focus: HIV researcher takes on COVID-19