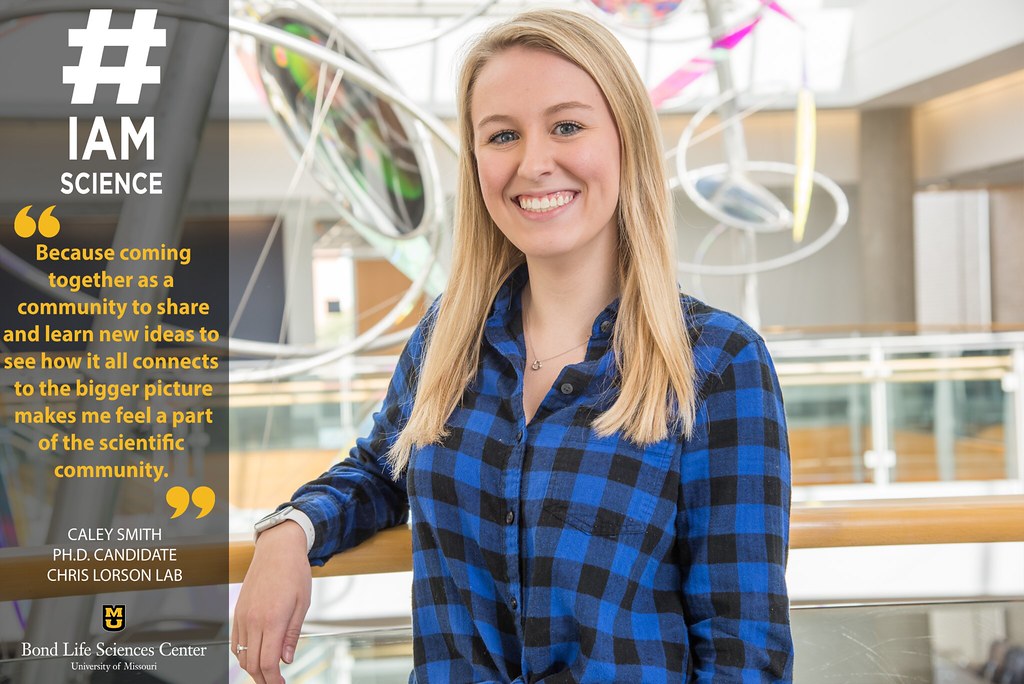 With her cheerful and friendly demeanor, graduate student Caley Smith can transform any rigid lab into a place of warmth and scientific excitement.

In 2017, Smith was searching for a lab on campus where she could explore the world of genetics.

“It was probably not until high school biology class where I got my first real lecture on genetics and genetic diseases,” Smith said. “It was more about understanding. You have this gene, and this mutation happens, and this disease happens. That I always found super fascinating.”

By the time she finished her rotation of labs on campus, she found her place in the Chris Lorson lab at Bond Life Sciences Center.

“When I was rotating there, there was a real sense of community,” Smith said.

Not only did the Lorson lab provide the place and expertise for her to study genetics, but it was also scientists like Eric Villalón, former postdoctoral fellow in the Lorson lab, who welcomed her.

“Right away she was pretty much a blank open book,” said Villalón, current postdoctoral fellow at Johns Hopkins University School of Medicine. “She was open to anything, and she was very curious to learn about the science in the lab. She was very eager to learn all the techniques that we used in the lab to do the research.”

The Lorson lab studies spinal muscular atrophy (SMA), which is a genetic disorder that occurs in children missing the survival motor neuron one gene. The disorder is a leading genetic cause of infantile death worldwide and causes muscle weakness, respiratory failure and premature death. Spinal muscular atrophy with respiratory distress type 1 (SMARD1) is a rare type of SMA caused by a different gene mutation with respiratory distress as the first symptom.

“My natural curiosity and wanting to know why gradually turned into ‘I want to help these kids,’” Smith said.

Smith focuses on characterizing mouse models for SMARD1 based on human-derived protein mutations, so then researchers can do preclinical testing of treatments to measure their effectiveness and expand their knowledge on SMARD1. Models like these didn’t exist prior to the Lorson lab.

Working with the mice in the Lorson lab also allows Smith to see the effects of her work in real-time.

“By doing this animal work and treating these mice, I can directly see these mice get better,” Smith said. “It’s fulfilling in that way because it helps me see that connection of what I’m doing in a very preclinical setting to see how it could potentially benefit kids down the line.”

Over the past three years at the lab, Smith’s unsatiated curiosity has treated her well in the field. However, she has narrowed her focus to her own scientific questions.

“She has grown to think critically and independently about her science,” Villalón said. “She has grown a lot from a very young wannabe scientist to the real scientist that she is now. She has been fully independent for the past year and a half or two.”

Now, Smith is performing her own experiments and mentoring others. Maybe she’ll even help someone find their own place in the world of science.