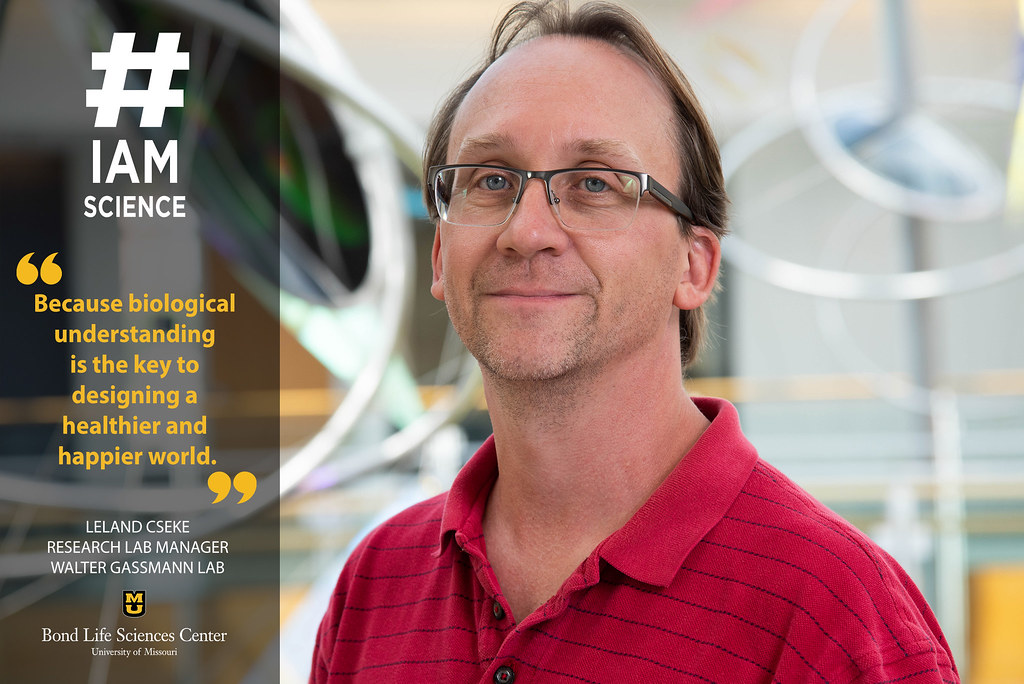 In a cluttered basement in Dearborn, Michigan, one could find Leland Cseke conducting amateur plant tissue culture experiments on his family’s pool table as a child. These attempted experiments consisted of whatever he could find around the house, such as gelatin mix, items from his mother’s bathroom, and motors from his step-father’s work.

Now Cseke is the research lab manager in the Gassmann lab at Bond Life Sciences Center and has an actual lab to work in, with all the supplies he needs.

“I look back in amusement that I’m still kind of doing the same thing,” Cseke said. “I think I knew early on I was going to study plant sciences.”

Cseke’s passion for plant science grew in high-school, and after a short stint in community college, he went to Michigan Technical University (MTU) for his undergraduate degree.

“It is all the way up in the forests in the upper peninsula of Michigan,” Cseke said. “That’s where I met my first really influential advisor, Gopi Podila. He had a lab there and he was interested in environmental issues dealing with how soil fungi interact with trees — how trees develop and how humans use them — which made a real impact on me.”

After he graduated from MTU, Cseke went on to receive his graduate degrees from the University of Michigan in plant physiology and molecular biology. Here, he studied how the activation or deactivation of a single scent gene over evolutionary time controls what pollinators come to flowers.

For his postdoc, he decided to go to the University of Arizona, to experience a different climate and to study plant post-transcriptional gene silencing. He used methods in plant transformation in dicots and monocots, which helped lead to new RNAi technologies.

RNAi is the biological process that dials down the level of a protein that evolved to protect cells from viruses.

“I had a great learning experience in Arizona, but their forests are not what we typically think of because they’re all thorny. Everything has thorns, even the softest looking plant is grabbing at you. I had a longing to get back to a ‘real’ forest. So, I decided to give Gopi Padilla a call,” Cseke said.

Turns out, Podila had a position for Cseke: assistant research professor. Along with teaching molecular biology and chemical principles of biology, Cseke conducted research on the molecular biology of aspen tree wood and flower development.

A few years later, Podila decided to move to the University of Alabama in Huntsville (UAH) and asked Cseke to follow.

“I went from the great white north to heat and humidity. At the time, I really thought that I would more likely end up living in Alaska more than Alabama, but Gopi asked me to go with him to run his lab,” Cseke said.

Alabama ended up being where Cseke laid down his roots. He spent more than 15 years teaching classes, conducting research, and authoring papers and books there. He even started a community garden to bring applied learning to more people.

“The community garden became a hands-on research plot for my class ‘People, Plants, and Environment.’ Students in biology and earth system sciences could come and learn about plant and soil biology through hands-on experiences. It was really helpful for the students to be out of the classroom to actually see the biology rather than just talk about it,” Cseke said.

Cseke and his graduate students worked on many environmental molecular biology projects dealing with beneficial plant/microbe interactions. He worked extensively with the USDA and the Department of Energy as well as the Argonne and Brookhaven National Laboratories.

Cseke’s interests have taken him to all seven continents, from Washington DC to work with government policies to Antarctica to see first-hand the effects of climate change.

Soon, Cseke became interested in permaculture. Unlike permafrost, permaculture does not have anything to do with frozen dirt. Permaculture is an environmental design science that is based on principles at work in nature to develop ecosystem solutions that result in regenerative systems that will last for centuries.

Cseke helped form a group of engineers interested in permaculture and correctly portraying the science behind regenerative design. They are developing a framework for designers to create systems that are biocompatible.

“We want the design framework to not only benefit humans, but the entire surrounding environment and ecosystems,” he said.

His work on regenerative design helped lead to the creation of the Institute for Integrated Regenerative Design, where Cseke remains a collaborator on weekly Zoom calls.

The move to Missouri and Bond LSC came in 2018 when he sensed a need to be closer to family. He now works on how plant pathogens interact with a plant’s immune system.

“Throughout my career, I’ve kept my ears and eyes open for where people are doing good science but also having a good life,” Cseke said. “Overall, I think that Mizzou is a great place and has a good community of not just plant scientists, but scientists across the board.”

He is excited about his future here.

“I am a lifelong student. I don’t like to assume that I truly understand anything because that inhibits learning,” Cseke said. “There’s so much complexity on the pathogen side that I didn’t even realize I didn’t know, and this makes me even more excited to pursue science.”