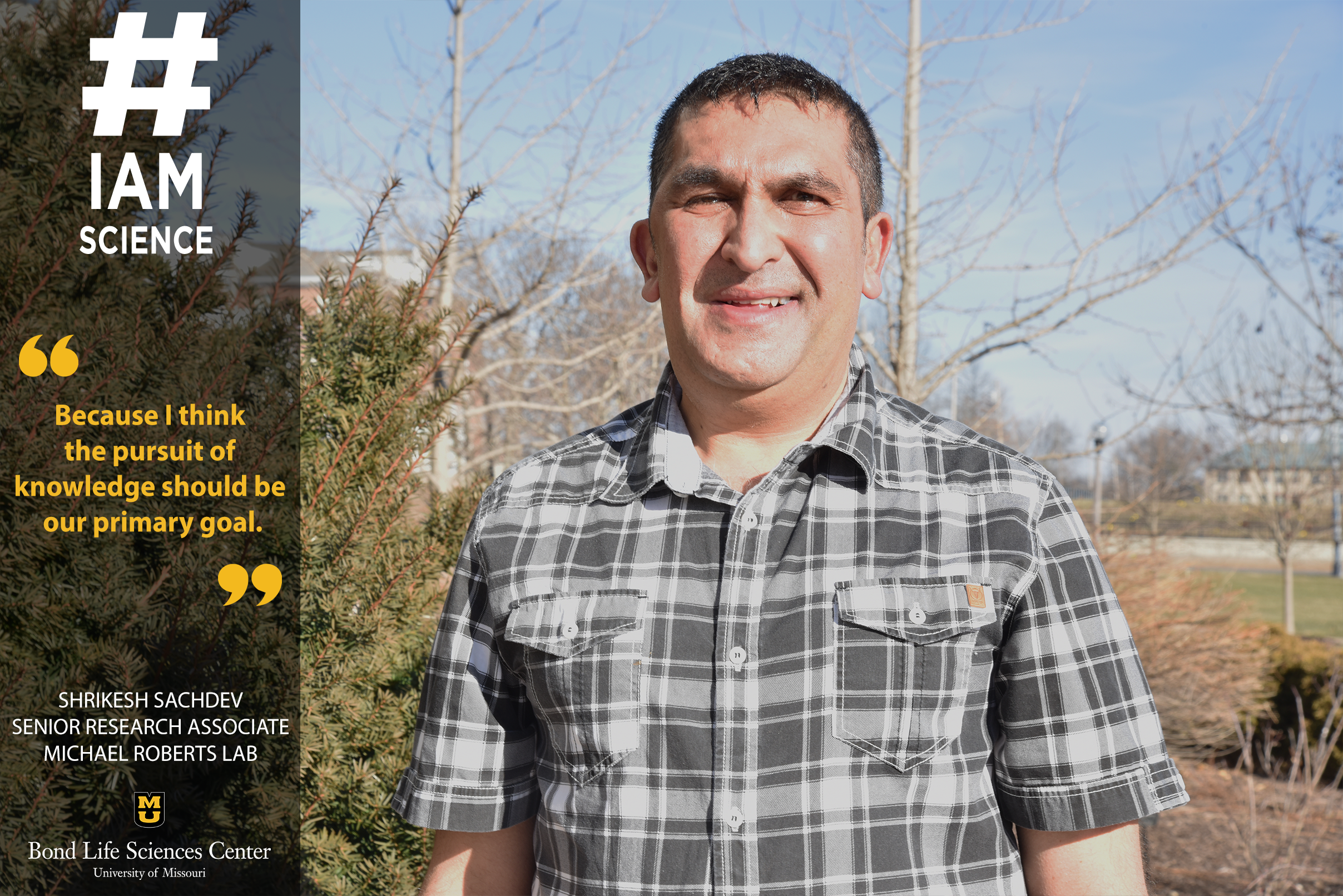 Science is a pyramid. Every breakthrough and discovery are reached through incremental steps that build off the previous level.

“It takes many small steps to get to a treatment or a cure,” Sachdev said. “It very often takes decades, but it’s nice to be able to put in your little piece of the puzzle that might help lead to the discovery, if not a cure.”

Sachdev began his path to Bond Life Sciences Center when he left his home country of Canada in 1991 to earn his master’s degree in fisheries and wildlife from Mizzou.

Once he graduated in 1993, he felt his heart being pulled towards another field — disease and disease-related processes. That led him to conduct his Ph.D. in biochemistry doing cancer research with Mark Hannink lab in the Biochemistry Department at Mizzou.

After receiving his Ph.D. in 1998, Sachdev went to Munich, Germany as a Leukemia and Lymphoma Society Fellow for his postdoctoral research in Rudi Grosschedl’s lab, where he researched a developmental signaling pathway that has been implicated in cancer.

“Every scientist thinks, ‘I want to cure cancer, or I want to cure HIV,’” Sachdev said. “You always want to contribute to that, but I think the pursuit of knowledge should be our primary goal. Once we can understand the basics of how things work, then we can try and understand what is causing the diseases.”

While in Munich, Sachdev found a new type of SUMO E3 ligase enzyme that modulates a developmental signal transduction pathway. That was one of those underappreciated incremental steps.

“Science is incremental, but those ‘aha moments’ are what you live for,” Sachdev said. “I was thinking to myself, ‘I am the only person in the world that knows this right now…And it’s going to help people understand other things.’”

A mutation in the Retinoic Acid-Induced one (RAI1) causes the Smith-Magenis syndrome. Sachdev and Ezashi convert fibroblasts — skin tissue cells — into pluripotent stem cells which can turn into certain different types of tissue cells. Researchers use this method to understand the effects of the disease on a molecular level.

“Dr. Ezashi had a huge impact on introducing me to stem cells and really igniting a passion within me,” Sachdev said.

Ezashi has known Sachdev for more than eighteen years. The two started collaborating while Sachdev was near the end of his time in Munich.

“He’s very friendly and kind,” Ezashi said. “Whenever I need help, he never rejects me. He tries to help every time, which I do appreciate.”

While Ezashi has been working with pluripotent stem cells since 2003, Sachdev brings biochemistry and molecular biology expertise to the project.

“We have complementary backgrounds,” Ezashi said. “He has strengths that I don’t have, so we complement each other. We can cover each other’s deficiencies.”

The induced pluripotent stem cells will help the researchers do more since they won’t have to use embryo-derived materials that are restricting and complicated. However, both researchers have a long way to go in their study.

With a little luck, Sachdev’s multiple ongoing collaborations will each have their own set of incremental steps waiting to be found.