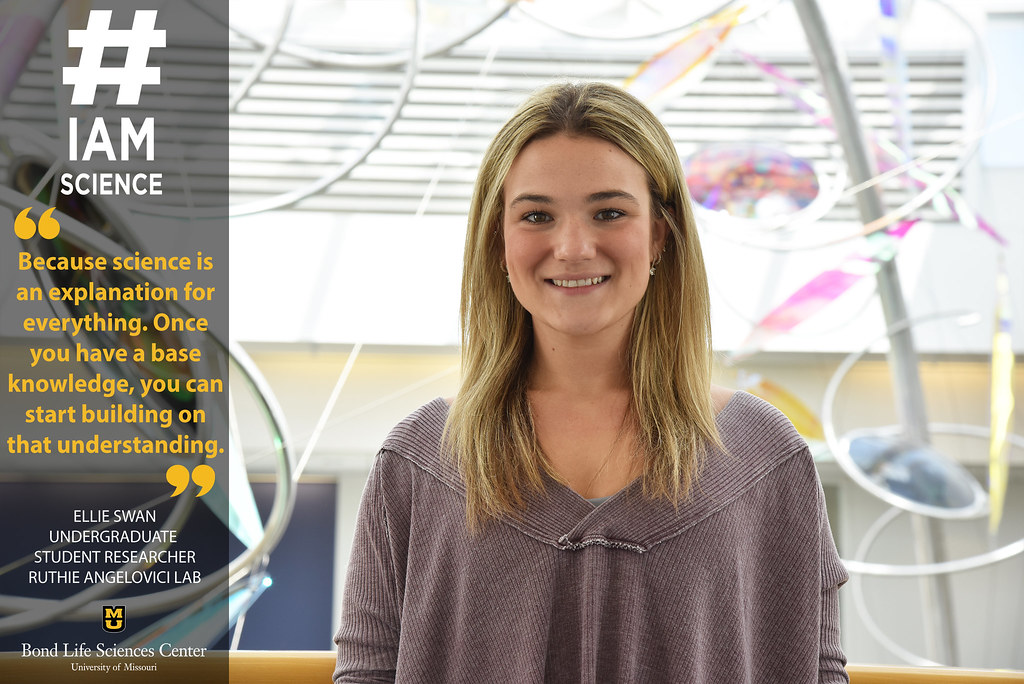 Whether Ellie Swan is in the gym lifting 200 pounds or in the lab preparing samples, she loves learning how nutrition and exercise affect the body.

“I’ve always really liked exercising and nutrition, and I like learning about that, so it’s interesting to me to learn about it on a very small level on how your body works so that you can have that better understanding,” Swan said. “I feel like once you have that base knowledge, you can take that on a greater scale for your body and use that for exercise and nutrition and not just those basic cellular functions.”

Swan, a sophomore pre-med student, joined the Ruthie Angelovici lab at Bond Life Sciences Center in January and hopes her work there will help her understand nutrition on a molecular level. This semester she maintains the plant growth chamber and helps graduate students with their projects, but Swan plans to work on her own project this summer.

Swan’s love for science started when dealing with medical issues at a young age.

“The type of person that I’ve always been is I want to understand why this is happening so I can fix it,” Swan said. “That kind of generated my love of science because it’s an explanation for everything. Once you have a base knowledge, you can kind of start building on that understanding.”

Exercise and nutrition are a big part of Swan’s life, especially powerlifting. The sport has athletes try to lift a maximal weight in one of the three positions: back squat, bench press and deadlift. Swan currently holds the Missouri state record for the back squat at 285 pounds. She uses the sport to challenge herself.

“I would describe her as somebody who is tenacious, who is extremely caring and sensitive to others, and somebody who is deeply driven goal-driven,” said Ellie Swan’s father Christopher Swan.

Now, Ellie is applying her goals and love of science in the Angelovici lab. Ruthie Angelovici, a principal investigator at Bond LSC, was her former cell biology professor.

“I really really enjoyed her teaching style,” Ellie said. “She’s so knowledgeable. You just could tell in all of her lectures that she just knew what she was talking about. And obviously, I like that she’s a strong female character. That’s something that I can look up to for sure.”

Once Angelovici mentioned she did cell metabolism research in her lab, Ellie realized she wanted to be a part of it.

The lab is currently trying to pinpoint amino acids in seeds so they can fortify these seeds or equip them with all the necessary vitamins and minerals a person needs in a day. By doing so, the lab can bolster food supplies in third-world countries where many people rely on fortified cereals for their vitamins, minerals and proteins.

Now in the lab for about four months, she’s learned that conducting science isn’t what she originally thought it was.

“To learn more about science, you have to be super, super particular and be very, very specific,” Ellie said. “But whenever you find that one it’s like, ‘Ah hah! Here we are. Here we are. We found it.’”

Despite the hurdles, she is known for her positive attitude.

“There’s been plenty of times when she probably had reason to feel down on herself, and maybe did for a little bit, but she was always able to pick herself back up and refocus and get going,” Christopher Swan said. “I think that shows an incredible amount of self-confidence and fortitude.”

A year from now, Ellie plans on taking the MCAT and starting the application process for medical school. She wants to eventually become a dermatologist.

In the meantime, she will be in the Angelovici lab diving into what’s goes on at the molecular level.