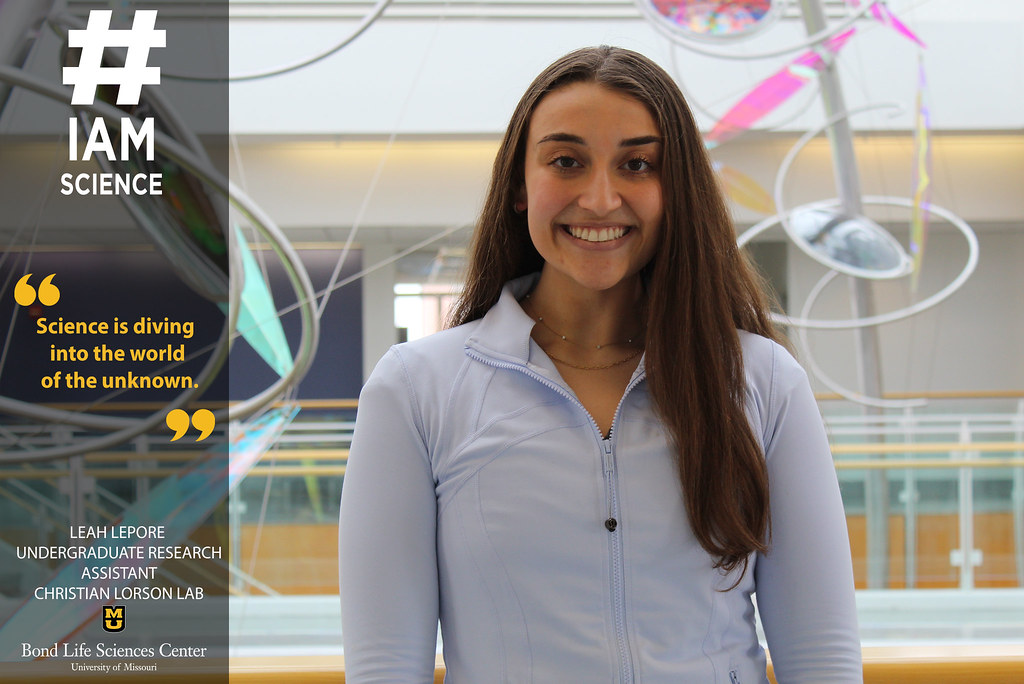 Exploring new places and diving into the world of the unknown can be intimidating. At a young age, Leah Lepore was immersed in this world and grew to love it.

“The first time I left the country was to travel to Japan and it was an incredible culture shock,” said the current Chris Lorson lab member. “From my twelve-year-old perspective, I was learning about a different way of life but also drove my parents nuts because I would only eat McDonald’s while we were there.”

An avid traveler, Lepore loves immersing herself in new cultures and seeing the world from a different point of view. This has blended into other areas of life, especially when it comes to her passion for science.

“I think traveling is what formed this kind of wanderlust that I have, and that exploring unknown places gets you out of your day-to-day routine and puts things into perspective,” she said. “There’s so much in the world than what you see around you.”

Lepore is a sophomore majoring in biochemistry. She wasn’t new to working in a lab when she joined Bond LSC in summer of 2021. She worked at two other labs in high school, so she found it imperative to join a lab that would challenge and prepare her for the future. As a member of the Lorson lab and an employee of Shift Pharmaceuticals — Lorson’s business off-shoot of his research — she found that.

“It’s really interesting to see the industry science and the academic science be complimentary,” Lepore said.

At Shift Pharmaceutical, she works on Charcot-Marie-Tooth disease (CMT). CMT causes abnormalities in the nerves feet, legs, hands, and arms. This disease was unfamiliar to her before she joined, but that did not hinder her enthusiasm to learn more.

“What’s really interesting is that it doesn’t necessarily kill you, but it diminishes the quality of life because it is caused by this overexpression of protein,” she said. “It causes your limbs to contract but not able to relax while also impacting your balance and dexterity.”

Lepore uses gene silencing therapy with synthetic nucleotides that bind to mRNA in this research. mRNA codes for proteins and since there is an abundance of certain proteins in patients with CMT, she is trying to silence portions of mRNA that code for them.

Lepore aims to spread her desire to be involved in research as an ambassador for the Office of Undergraduate Research, and she encourages students to get involved as soon as possible. Many students are apprehensive to dive headfirst into working at a lab, but Lepore reassures that there is a place for everyone at Bond LSC.

“I find that everyone that I’ve met here is extremely intelligent, but also great at making anyone who hasn’t worked in a lab before feel extremely comfortable,” she said. “It’s a very welcoming and inviting atmosphere.”

When not in the lab or helping undergraduates, she focuses on fitness. At Orange Theory, Lepore lifts weights and runs on the treadmill, which helps her cope with stress and anxiety. No matter how hectic life might get, her positive attitude and ambitious personality shine through.

“Sometimes you have to realize that you’re not going to know everything even if you want to, but there are always going to be people that are willing to explain it to you,” she said. “However, not knowing everything is okay sometimes because it gives you room to learn and engage these critical skills that are not only going to help you in the lab but also in your day-to-day life.”