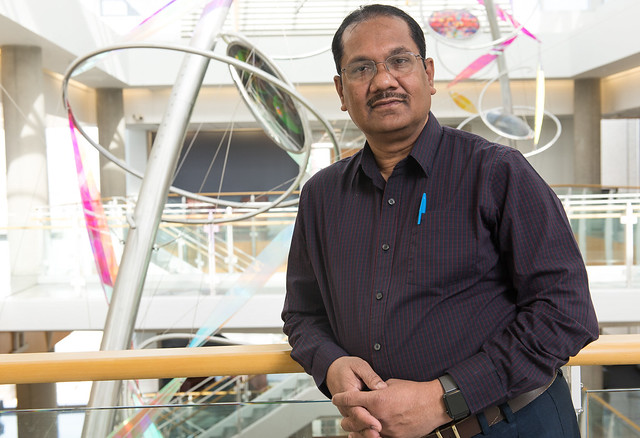 Kamlendra Singh sat down in his fourth floor office as a Bond LSC Investigator for the first time on September first after nearly 14 years at the Bond Life Sciences Center studying HIV, COVID-19 and how the right molecule can interact to fight disease.

Designer compounds are Singh’s specialty, and as a new principal investigator he directs four projects on microscopic treatments for various diseases. He will also continue his work as Molecular Interactions Core Director alongside his new role.

“Everyone [in the center] is such a tight community … That’s why this building is a benefit to be here,” Singh said.

“He developed independent ideas very quickly, but there was no tenure track position for him,” Gassmann said. “That changed in January of this year.”

As a research center, the LSC does not have tenure-track positions and partners with academic units for those. Once Singh obtained a tenure-track position in the Department of Veterinary Pathobiology, faculty members in the LSC voted Singh into the LSC Investigator position after he presented his research plan during a chalk talk.

“He’s done it. He’s done great work, and he deserves it,” Gassmann said.

As Singh pivots into his new role, he tackles major projects designing molecules as solutions to diseases that may pave the way for future treatment options.

A drug is only as good as its ability to avoid resistance.

That’s the case with HIV, which is manageable with medication but evolves and mutates to avoid getting caught. Singh’s job is to be smarter.

Singh’s idea is to find new HIV antivirals that block the virus from infecting host cells. That goal could lead to novel antivirals that work for mutated HIV subtypes in underdeveloped countries.

“Most of the HIV treatments are developed where there is money, that is in developed countries,” Singh said.

HIV treatments are often made for the version of the virus that exists in first-world countries where the research takes place. Singh, on the contrary, concentrates his efforts on overlooked strains of HIV that often exist in underdeveloped countries, trying to understand the structural components of the virus to improve the treatment.

“We have to develop the drugs such that they work everywhere, but to do that you have to know the mechanism first,” Singh said.

Too much of a good thing can become bad, especially in living organisms. That’s where Singh’s second project focuses, tackling copper concentrations.

Too much copper facilitates cancer growth and spread. Singh works with Bond LSC researcher Michael Petris to find ways to hijack molecules that transport copper in and out of the cell. With funding from the National Cancer Institute, they have already found two potential molecules.

“Copper is a trace metal, and if it accumulates too much into the cell … then those cells become cancerous cells,” Singh said.

Singh’s preliminary trials sifted through millions of drug candidates and then tested 10 compounds to find one that could bind to the copper transporters and block copper’s path into the cell. Out of the initial 10, two were successful.

“That’s a lot. In this kind of drug discovery if you can get two out of a million that’s a success,” Singh said.

He plans to continue searching for viable compounds that could be used as cancer treatment, but his compounds may also be multi-purposeful.

Certain bacteria have similar compounds to the copper transporters, and just as viruses mutate to avoid antivirals, bacteria rarely go down without a fight.

Resistance bacteria mutate to survive antibiotic treatments, but Singh’s compounds may bind to compounds in the bacteria and have antibacterial roles.

“So, now we want to develop antibiotics using those drugs but making subtle changes. We want to make it specific for bacteria,” Singh said.

In the face of the COVID-19 pandemic, Singh’s third project tackles another set of viruses.

“The idea was to discover an inhibitor that not only blocks this coronavirus, but it can also be used for other viruses,” Singh said.

Tackling a diverse portfolio of viruses with a single method sounds impossible with vast differences between each pathogen. Singh’s solution — look for a  common compound.

It’s role is to copy the virus’ genetic material to create more virus within the host. By targeting RNA polymerase, Singh hopes to prevent the virus from replicating.

“Not only can it be effective against Coronavirus … but other viruses, let’s say Zika virus for example,” Singh said.

Singh’s fourth project brings him back to his postdoctoral work with a fresh perspective and decades of more experience. He turns to DNA polymerases now with the goal of cancer treatment.

Similar to RNA polymerase in viruses, DNA polymerase’s job is to replicate the genetic material for new cells in humans.

Every day, cells replicate to replace damaged or dead cells. Think about your skin — skin cells are constantly exposed to the elements and suffer wear and tear. When skin cells die, nearby cells divide to create new cells in their place. To create new cells, the first step is to duplicate the genetic material in a cell to be used in the new cell.

“So that’s a brand new project, and I’m really excited about it,” Singh said.