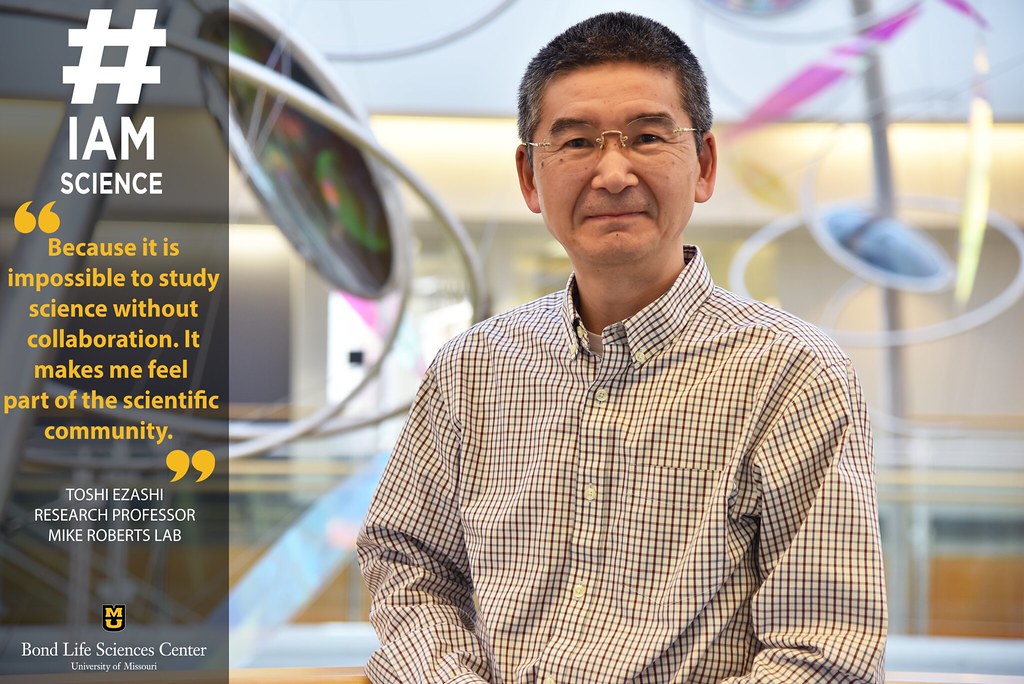 Despite his quiet demeanor, Toshi Ezashi leaves an impression on those who meet him in the halls of Bond LSC through his quiet intensity and constant courtesy.

The research professor was here before the “Joy of Discovery” sculpture in the atrium was built or the living plant wall was hung, calmly making progress with stem cells as part of the Mike Roberts lab team.

“I’m mainly doing research on trophoblast that compose the main component of the placenta tissue,” said Ezashi, who first came to Mizzou in 1995. “Using stem cell technology, we try to understand the pregnancy disease which happens in the placenta.”

Stem cells can be considered the ultimate source. They turn into all different types of the adult cells that make up the many tissues, organs and parts of a living thing. Induced pluripotent stem cells, on the other hand, are a little different. They start out as adult skin or blood cells but are pushed to revert back to an embryonic-like stage where they can once again turn into about any type of cell and self-renew.

Induced pluripotent stem cells were first discovered in a paper that appeared in Cell in 2006, and Ezashi excitedly presented it to his lab mates that same day.

“He knew instantly how important that was going to be,” said Laura Schulz, associate professor of Obstetrics, Gynecology and Women’s Health who works with the Roberts lab. “That’s just him. I think he really sees those things.”

Schulz has worked with Ezashi for the past 15 years.

“He’s just an incredibly kind person, but also a really very thoughtful, thorough and creative scientist,” Schulz said. “So, together those have made him a great collaborator.”

Currently, Schulz and Ezashi are studying trophoblast cells — stem cells from the placenta of early pregnancies. Ezashi is using these trophoblast cells to try to eventually understand preeclampsia, which results in dangerously high blood pressure and almost a rejection of the placenta. It is a potentially fatal complication that is only cured by the premature delivery of the baby.

Studying the placenta is difficult due to ethical issues and its ephemeral nature in relation to pregnancy. However, Ezashi generates placental cells that derive from umbilical cords left over after pregnancy to study the early stage of the placenta. This way, Ezashi and other researchers can figure out what causes the pregnancy complication.

“Right now, we don’t have any way to cure this disease,” Ezashi said. “The only option is to deliver the baby prematurely. Because of this issue being rooted in our lack of information of the time of the period, how the placenta works, we are expecting this study to provide important information to understand why this disease develops in this case.”

Ezashi has seen attitudes towards this kind of research shift in his many years working with stem cells.

“It was 2002,” Ezashi said. “We had this type of way of thinking that was just application. In those days, there was some understanding or social acceptance of stem cells, but we stepped forward to using stem cells in this field. I look back more than 17 or 18 years ago, but I still think it was the right move and decision to get into this field.”

Ezashi has grown along with attitudes and Bond LSC.

“He’s gained confidence and leadership skills I think over those 15 years, but actually he seems very similar to the person I met 15 years ago,” Schulz said. “He’s really just kind of a down-to-earth, quiet guy and the same careful scientist he’s always been.”

Even with 25 years under his belt, Ezashi isn’t leaving Bond LSC anytime soon.

“I know I have a different background, but by staying here to do something, I can uniquely contribute to society,” Ezashi said. “That means something. I can be a part of some message to the work, ‘How much can we achieve?’”

“#IAmScience because education and my pursuit of learning became my ticket out of poverty and a way that I can really help others.”

“Mother knows best” rings true for Gerialisa Caesar. In her family, the career options were either to be a lawyer, engineer or doctor.

But with little interest in law and a greater love for science than math, Caesar decided to pursue her doctorate.

“I graduated high school at 16 fully equipped to enter the work force,” Caesar said. “I went back to school to study science because my mom basically told me I had to, but biology fit me really well, so it worked out.”

Initially, Caesar was hesitant that she could even become a scientist.

“I had an idea of what a scientist was, and it wasn’t me,” Caesar said. “After I immigrated from Guyana, my undergraduate advisors, Drs. Carroll and Catapane, explained the opportunities I had to study biology. It opened the world of possibilities for me to pursue science.”

“My research is to understand how a mother’s nutrition prior to and during pregnancy affects the baby’s development,” Caesar said. “This is important as several studies link maternal diet during pregnancy to an increase in susceptibility of the offspring developing diseases such as obesity, diabetes and hypertension in adulthood.”

That includes connecting how mother’s diets cause fetal health issues, which is a highly debated topic.

“For example, a lot of women are told to take folic acid pills during pregnancy,” Caesar said. “Doing that has been tied to help with neural development concerns — things like spina bifada [a birth defect that affects developing babies’ spinal cords]. Understanding the mechanisms that make that occur would aid in developing better interventions to prevent such occurrences.”

As a result, Caesar’s research has the ability to help the world’s greatest health concerns in an impactful way.

“My work is directly contributing to prevent health issues that exist for future generations,” Caesar said. “Knowing that is motivating.”

After she earns her Ph.D., Caesar would love to work for the Center for Disease Control and Prevention.

“The CDC has immediate response teams that react to major disease concerns. Being a part of that would be incredible,” Caesar said. “There’s something about working for the CDC and being able to have a meaningful impact within the community that calls me.”

Caesar plans to channel that passion regardless of where she ends up, though.

“Biology is literally the study of life,” Caesar said. “As much as I thought science was challenging, I am able to see how it affects everyday life. I have a purpose, and I know what I do is going to make a difference.”