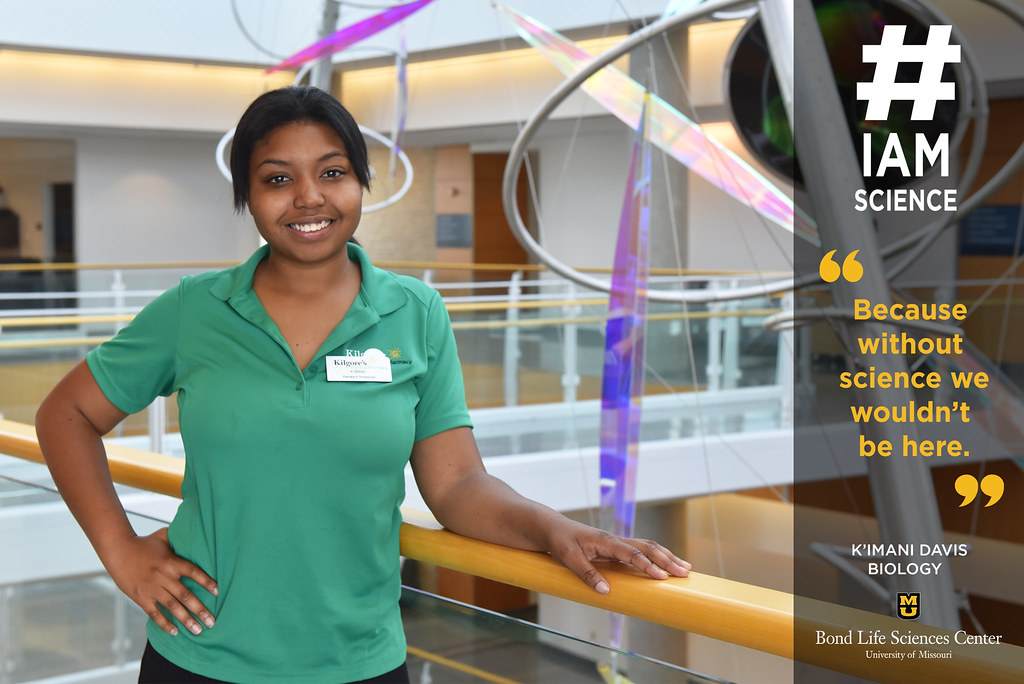 From hate to passion.

One class changed senior K’Imani Davis’s mind, who is now going into her senior year working in the Anand Chandrasekhar lab at Bond LSC.

“I used to actually hate science, and when I say hate, I hated it,” Davis said. “Senior year of high school I took AP Bio, I loved it. I don’t know what happened, but I started to try and I liked the subject.”

After Davis’s change of heart, she decided to start out at MU as a biology major, and she is now going the pre-med route.

Just like Davis ended up in science, she ended up at MU by chance.

“I wasn’t going to come here at first,” Davis said. “I never visited and never knew someone here. I was so indecisive about my college decisions so I put all my options in a hat and just drew, I drew Mizzou so I just came here.”

Davis came to MU knowing nothing about the campus, programs or any students. And then she stumbled across an opportunity that changed her college experience for her.

“I actually got involved by accident,” Davis said. “I had a class in this building and across from my class was the undergraduate research office. I decided I wanted to do research because it was science out of the classroom.”

From freshman year to now, Davis has found a home away from home in her lab.

“I think of my lab as a family,” Davis said. “We always have something to do all together every semester. It’s very family oriented, it’s very close and tight knit. My boss sometimes even acts like my father.”

Davis didn’t just find a family at Bond LSC, she found her passion. The lab is studying neuronal migration in zebra fish. This study looks at how neurons move into place as the brain and nervous system develops with the hope of learning how the process works and using that information to understand neuro-degenerative disease. In her freshman year when Davis was an intern in the lab, she fed the fish and cleaned the tanks. Now, she analyzes fish behaviors and compares swim patterns between wild and mutated zebra fish.

“By analyzing their behavior, we are able to see if there are neuronal migration patterns, and we see what defects leads to different behaviors,” Davis said.

Davis’s goal for this upcoming year is to have a poster of her research to display to others. Her experience at MU has brought her a family, a passion and no longer a hatred for science.

“I think everything happens for a reason,” Davis said.

Sometimes it’s socks. Another time, it was a book cover.

Robert Schmidt has retrieved quite a few things from misguided pets’ digestive systems as an assistant at Horton Animal Hospital, where he’s worked with his aunt for the past three years.

While most of the time he helps with simpler things — such as feeding kenneled animals or spaying and neutering pets — he also has amputated a dog’s toe after it had a lawnmower mishap.

Schmidt says he’s kind of following in his aunt’s footsteps. She majored in biochemistry at the University of Missouri and studied at its veterinary school, too. That’s what Robert wants to do with his life.

Schmidt likes working with animals, but pets aren’t the only animals he’s interested in. An internship at the MU Animal Sciences Research Center two summers ago had Schmidt elbow deep in fistulated cows’ stomachs as he assisted in research that tested the affects of adding different metals in cows feed to help them better absorb protein.

“My family’s always had a dog, my sister has a cat and I work at a small animal clinic. For a while, I was just like, ‘I’m not going to work with cows. I didn’t grow up on a farm.’ But now, after the internship, I’m interested in getting some more experience.”

As a freshman in the Discovery Fellows Program, Schmidt now finds himself knuckle deep in dirt as he digs into plant genetics.

The Discovery Fellows Program pairs first-semester freshmen and sophomores with scientists in their chosen field, allowing them to get hands-on experience in research on campus while earning a $1,700 stipend.

That led Schmidt, an MU Honors College student, to the lab of biologist Scott Peck in the Bond Life Sciences Center.

Peck studies how plants recognize and respond to infections, specifically focusing on three proteins that begin to chemically modify shortly after a plant is infected.

No one knows what these proteins actually do, Peck said, making the research that much more interesting.

Schmidt has been growing Arabidopsis seeds of three different types, each missing one of the three proteins. Once those seeds have fully grown, Schmidt said they will cross-pollinate the three variations to hopefully create a plant without any of those three proteins.

He hopes to have triple mutants by early next semester, so they can experiment with them to better understand the roles of the absent proteins.

While Schmidt came into Peck’s lab with more of an interest in animals, he sees how the skills translate.

“If I worked with animals, I’d want to do genetics and I’m doing genetics with plants right now. A lot of the lab techniques are transferable.”

Like most freshman, the former Rockbridge Valedictorian is still figuring out his life plans. He’s considering a double major in math, a favorite subject of his, and now wonders whether he might attend graduate school instead of vet school.

“I really like learning, being in a classroom and being a student. I really enjoy that. I think research is almost like a career where you’re almost always a student. You’re just always learning.”

As for now, he’s just waiting for his first batch of Arabidopsis seeds to mature.