May 3, 2019 By Mariah Cox in #IAmScience, Research Tags: Jay Thelen

Preparing home-cooked meals regularly and maintaining houseplants can oftentimes be too time-consuming for stressed-out college students, but not for Ethan Myers.

At Myers’ student apartment you can find a bonsai tree and a plethora of herbs such as catnip, basil, mint and even some pepper plants. This love of plants comes from his childhood when he spent his summers helping his grandma plant shrubs, flowers and trees in her garden.

Using the herbs she grew in her garden, Myers would help his grandma cook Thanksgiving dinner and appetizers for her game club called ‘the game girls.’ Working alongside her in the garden and the kitchen, all while sharing a common passion for nature, formed the strong relationship they still have today.

“Me and my grandma are tight,” said the biochemistry undergrad.

His knack for gardening as well as his interest in plants from a scientific perspective led him to pursue a degree in biochemistry and pick up an independent research project in the Jay Thelen lab in Bond LSC.

“My grandpa was a nuclear physicist and so having that science background from him has been interesting and fulfilling to see why things in the wild are the way they are and how they can be altered in a science setting,” Myers said.

The first looks to overexpress a subunit of Acetyl-CoA Carboxylase, a biotin-dependent enzyme that provides the malonyl-CoA substrate for the biosynthesis of fatty acids. By overexpressing this subunit, Myers anticipates finding an increased amount of oil production in the test plants.

Another hypothesis looks to under-express a family of proteins that are negative regulators of acetyl-Coa carboxylase. By under-expressing biotin associated domain-containing proteins (BADCs) and inhibiting the gene that encodes BADCs, the protein can’t bind, and the plant will be able to produce more fatty acids.

Soybean oil is an environmentally friendly, renewable alternative to petroleum diesel. According to the United Soybean Board, biodiesel reduces greenhouse gas emissions by up to 86 percent.

By fortifying soybeans to produce more oil, less landmass, labor and other environmental resources, such as water and minerals, are needed.

“It’s important to be able to use resources to their fullest potential,” Myers said. “Soybeans are used for protein in the form of tofu and edamame as well as biofuels and industrial lubricants. Because of the increase in the world’s population, there has been a throttle on resources. By modifying plants to be more efficient, we can mitigate some of the stress on the planet.”

In other words, if we can get more out of one plant while using fewer resources, it creates a more sustainable supply while lessening the impacts on the environment.

In his spare time, Myers enjoys cooking as another passion. His interest in food really grew when he began working in restaurants almost 10 years ago.

“I really enjoy cooking for myself and my friends,” Myers said. “I use the herbs that I grow in my backyard. I made a homemade chicken alfredo pizza this past Sunday for a Game of Thrones watch party.”

The next step in Myers’ life likely leads to a doctoral program elsewhere. He is currently applying to Ph.D. programs at the University of California, Davis, University of Texas, Austin, University of Colorado, Denver and Michigan State University. In the future, he hopes to be a biochemistry professor and instill in his students the same sense of wonder that he has in his research.

“In this day and age, there are so many things that you can just Google and have an answer in seconds,” Myers said. “But there are so many questions out there where there is no answer on Google and you have to make your own understanding of things. It’s become so easy to have an answer at your fingertips, but it’s so much more valuable to actually figure something out on your own.” 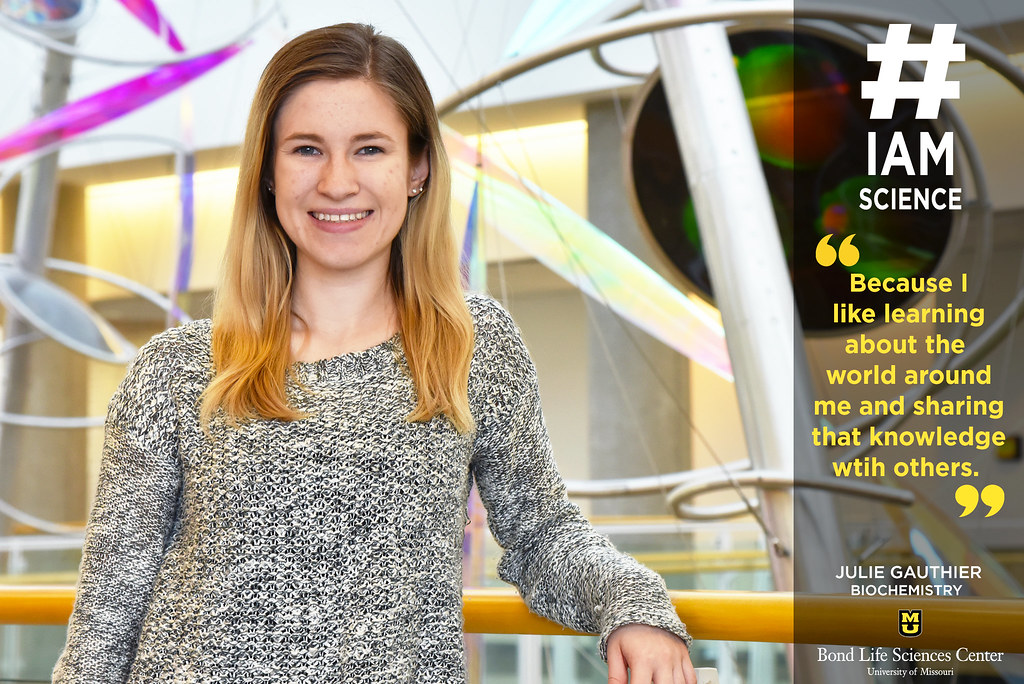 Many might agree that their sex education was not taught well in school.

This poorly taught education inspired junior Julie Gauthier to look deeper medicine and sexually transmitted diseases, and it spurred her interest in science.

“My high school had an uninformed sex education curriculum,” Gauthier said. “It was not based in science as much as I thought it should be, so when I got here I did a lot of personal research on sex health. Scientists are curious, and I was curious on the subject.”

While Gauthier’s initial interest was in science surrounding health, her current research path is quite the opposite.

“Although I do want to work in a public health field, I currently am doing biochemical plant science research,” Gauthier said.

Gauthier has been working in Dr. Jay Thelen’s lab at Bond LSC for three years where she focuses on finding ways to increase oil production in plants by studying the regulation of de novo fatty acid biosynthesis.

“Our lab studies an enzyme called acetyl-CoA carboxylase (ACCase) and other regulatory aspects of de novo fatty acid biosynthesis and triacylglycerol accumulation in oilseeds,” Gauthier said. “My current project focuses on a region of one of the subunits of ACCase that appears to interact with lipids based on its structural similarity to other lipid-binding proteins. I think that the research that my lab does is incredibly important in regards to the world’s growing population. It is becoming increasingly important to find new ways to provide resources for agriculture and human health, and boosting oil content in oilseed crops could provide solutions to issue like these.”

Even though Gauthier is studying plants, she sees a connection between them and her passion for medicine and sexual health.

“I am interested in the intersection between plants and medicine,” Gauthier said. “I believe it is important to learn as much as you can, and I enjoy having two different passions. It gives me a broader understanding of the world.”

This broader understanding has helped Gauthier find her niche, which was different from the original career dream she had coming to MU.

“I came here wanting to become a doctor,” Gauthier said. “The more I did research, the more I realized medical school is not the right path for me. I really like the medical field and want to go into that no matter what, but I’m not sure in what direction. I find myself more fulfilled working with people and infectious diseases. Currently, I want to either do public outreach or work in a lab at the Centers for Disease Control.”

Gauthier’s experience in the lab has helped both her growth as a researcher and a person.

“I have a very good environment [in my lab] to grow in many ways,” Gauthier said. “I have learned how to be a better scientist and to always be a critical thinker.”

Wherever she ends up, Gauthier wants to communicate to others her passions.

“Often times people that don’t have a scientific background ask me what I do in my lab, and I have to find a way that is correct to explain it down on a level they will understand, making it relevant to their life,” Gauthier said. “I can tell people what I’m doing in my lab and people will be like, ‘Why do I care?’, and I have to help them understand why they should.”

What do lasers have to do with food allergies?

Bond LSC’s Jay Thelen was recently part of a team that looked at how short laser pulses might be used to modify peptides and proteins to make foods edible for those with specific allergies.

Thelen, a biochemistry professor, joined scientists from his department, engineering and Denmark to explore this possibility. What they found was a way to modify molecules quicker and more cheaply than current chemical methods. This could potentially lower costs for specific applications in medicine, pharmacology, biotechnology and more.

We don’t want to give everything away, so read the whole story from MU’s College of Engineering.