Saliva is probably not the first thing that comes to mind when we think about eating our favorite foods. The clear liquid washes away food debris and bacteria, and it plays a vital role in maintaining our dental hygiene and oral health.

You may take it for granted, but for patients with Sjögren’s disease, life without saliva is challenging.

“We’ve seen firsthand how patients suffer from Sjögren’s disease and what the consequences are in the oral cavity,” said Olga Baker, a Bond Life Sciences Center principal investigator studying the syndrome.

The autoimmune disease causes our body to attack the glands that produce tears and saliva. This destruction at the hands of our immune system causes dry mouth and dry eyes as it eventually kills the cells that perform this valuable service to our bodies. Without saliva, tooth decay and painful diseases like gingivitis are almost inevitable.

Sjögren’s disease affects approximately 4 million people in the United States. The severity of the disease varies in patients, but it destroys all exocrine glands and there is currently no cure. While the cause of the disease is still unknown, researchers are turning efforts to alleviate patient discomfort.

The Baker lab focuses on a class of drugs called specialized pro-resolving lipid mediators. These medications are derived from essential fatty acids and play an important role in decreasing inflammation and recovering salivary function.

Harim Tavares Dos Santos — a post-doctoral fellow in the Baker lab and lead author on a recent study of this drug —has seen success with restoring salivary functions with the specialized pro-resolving lipid mediator drug resolvin D1 (RvD1). Resolvins act as anti-inflammatory mediators and restores saliva flow rates. The lab will test a  variety of drugs from the specialized pro-resolving lipid mediators’ class to see which one would yield the best results, but some receptors they affect within the salivary glands are unknown.

“The first step is to see if we know all the receptors for other drugs,” Tavares Dos Santos said. “Then, we test the different drugs to see which ones activate the receptor to possibly decrease inflammation and reach the goal of getting the saliva back.”

RvD1 activates the receptor ALX/FPR2 Tavares Dos Santos explains. This then triggers a signaling mechanism that promotes the survival of salivary gland cells and protects the cells tight junctions while increasing saliva secretion. Researchers used six human minor salivary from female subjects in this experiment to determine the expression of pro-resolving lipid mediators in patients with and without Sjögren’s syndrome.

Previously, the lab tested these drugs on mice models with Sjögren’s-like features and saw they can recover salivary function. However, researchers need more data to find other receptors that can maximize the positive response from the drug.

But mice aren’t the same as humans, and even when researchers test on humans it can be difficult to find patients with Sjögren’s disease willing to participate in the research.

“We don’t have a lot of literature in salivary glands to look for. Basically, what is known about resolvins and salivary glands is generated here in the lab,” Tavares Dos Santos said.

“Another challenge is that no one knows what causes the disease, so the research is mainly trial and error,” Baker said.

Baker explains that studies show people with Sjögren’s disease could have a genetic predisposition for it, but there are also environmental factors like viruses that could trigger the genetic components that lead to Sjögren’s disease.

“In the end, we want to create a drug that has all those properties to cure the patient so hopefully in the future, we can get a product on the market,” Baker said.

The Baker lab will present their progress with Sjögren’s syndrome at the 2023 Gordon Research Conference in Ventura, California. Both Baker and Tavares Dos Santos will co-chair the international conference that attracts researchers studying salivary glands and exocrine biology.

“This is a very important conference that will elevate Missouri,” Baker said. “The whole thing is really exciting.” 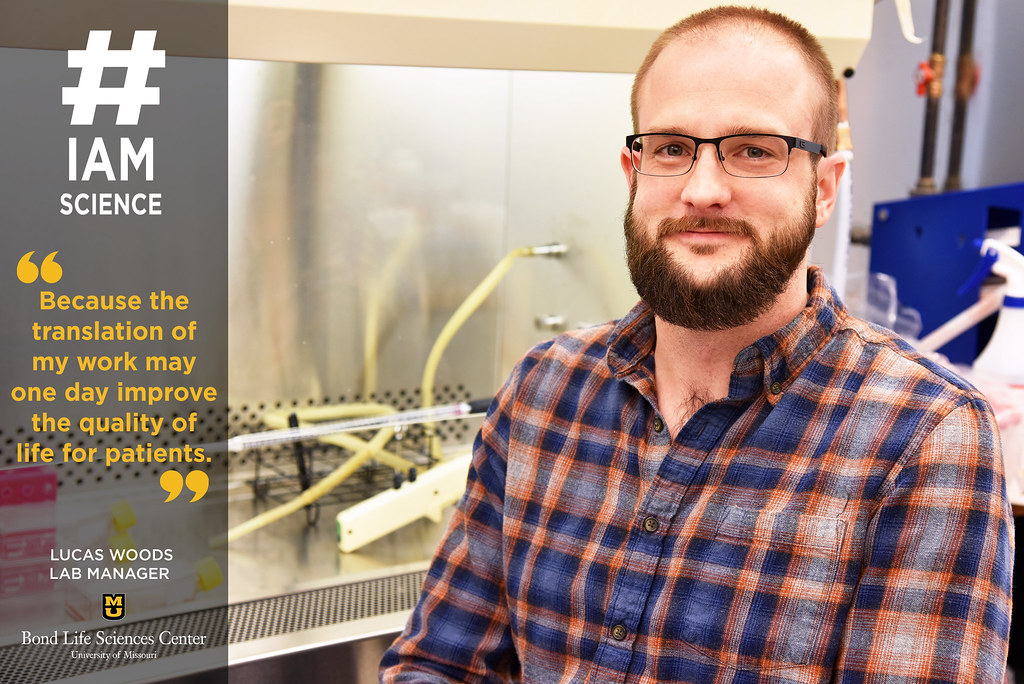 Ten years ago, Lucas Woods stepped into Gary Weisman’s lab with a fresh perspective on P2 cell receptors. Now, as an experienced lab manager, Woods dives deeper into the role of these receptors in a myriad of diseases.

Woods came to the Bond Life Sciences Center after graduating from Missouri State University in Springfield with a degree in cell and molecular biology. He studied P2 receptors as a part of his undergraduate research with Dr. Richard Garrad, who completed his post-doctoral research in Weisman’s lab. Garrad recognized Woods’s interest in the area of study and recommended he continue his research with Weisman at MU.

“The initial plan was to work in Dr. Weisman’s lab for a year or two then enroll in graduate school, but after I started here, one thing led to another and here I am, 10 years later, still doing the same research I have been doing for the past 12 years,” Woods said.

Sjögren’s syndrome is an autoimmune disease primarily affecting women at later stages in life where the immune system attacks and damages the salivary and lacrimal glands, reducing the ability to produce saliva and tears. This can lead to dental caries, periodontitis, yeast and bacterial infections, digestive disorders, loss of taste and difficulty swallowing, all of which reduce the quality of life for patients. The progression of Sjögren’s syndrome can also lead to the development of lymphoma.

“Usually people don’t show up to the doctor until they notice they have dry mouth and dry eye,” Woods said. “There’s no real solution for them. There are current treatments that try to alleviate the symptoms, such as artificial saliva and tears, rather than treat the cause of the disease. The idea of this research is to make better treatments.”

Currently, Weisman’s lab is focusing on two drugs that target P2 receptors to systemically reduce the inflammation in the salivary gland and improve saliva flow. The lab uses mouse models of human Sjögren’s syndrome to test the effectiveness of these two drugs in blocking the response of P2 receptors to extracellular ATP, which can exacerbate inflammation if left unchecked.

“We were joking the other day that when people ask us what we do for a living and we say we collect mouse saliva, they don’t believe us,” Woods said.

Rather than trying to generate a specific drug for clinical use, the lab aims to establish the idea that if a safe drug is found that can block these receptors and improve the Sjögren’s-like symptoms in mice, then it may translate as a therapeutic strategy in humans.

After working with Weisman for 10 years, it’s safe to say Woods has learned a lot. But the main lesson that he has taken from his experience is that effective communication of science is key.

“Success in science is as much dependent on your ability to communicate science as your ability to do science,” Woods said. “That communication is often in the form of writing papers for publication or writing grants, but the ability to effectively communicate the work that you did and the work you are going to do is absolutely essential.”

In conjunction with his research, Woods is also taking classes toward completing a graduate degree.

“I’m in a unique position right now where I am both a research staff member in the biochemistry department and I’m a student in the department as well,” Woods said.

Woods’s interest in science sparked when he realized that it could lead to limitless discovery. The idea that he could be the first to discover something that the entire world doesn’t know about yet drives him in his research.

When not in the lab, Woods enjoys running and playing with his two kids, Audrey and Edison.

Eventually, Woods hopes to run his own lab. When asked whether he would continue his research with P2 receptors, Woods said it would be in his best interest because of his long history in the field of study.

“P2 receptors are so ubiquitous in the body, there’s no shortage of questions to ask that need answering,” Woods said.