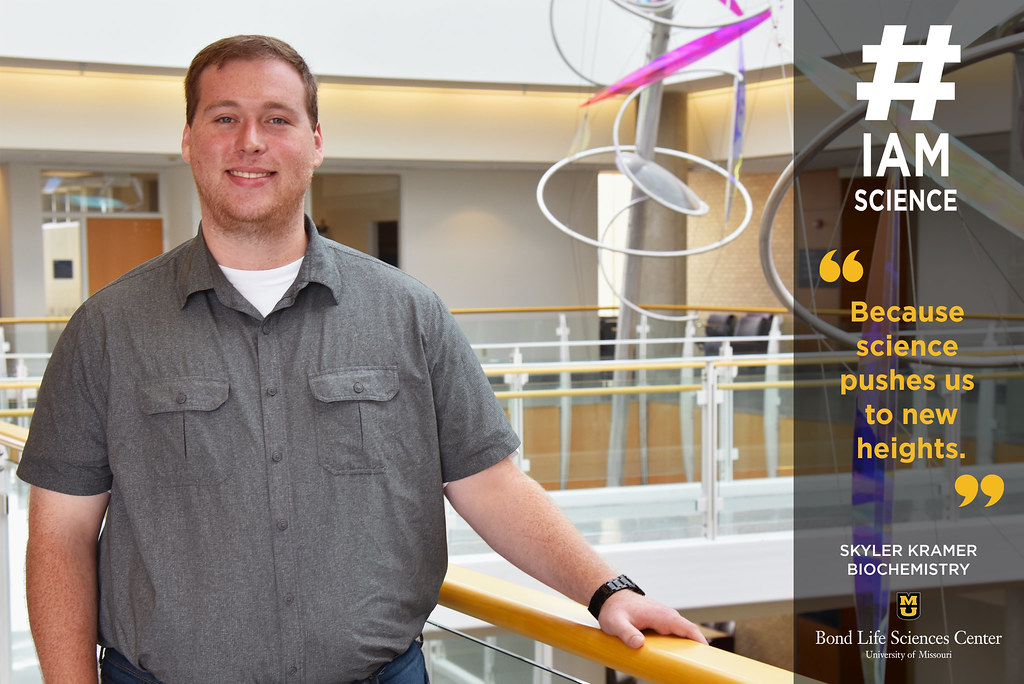 Senior Skyler Kramer has spent each year of college in a different lab, he currently works in the Sumner Lab at Bond LSC. | photo by Erica Overfelt, Bond LSC

College is a time of finding yourself and finding what you actually want to do.

For senior Skyler Kramer, he knew his first year of college.

Kramer currently works in the the Sumner Lab as a summer intern, however, this is the fourth lab he has worked in since coming to MU.

Kramer started out college in a biology lab studying conservation in Tucker Hall his freshman year. His research experience soon made him forget his childhood dream of being a doctor. He realized he enjoyed working on the body, but from a research perspective.

“I was working with salamanders,” Kramer said. “Figuring out how to test, it was like a puzzle. At the same time in the academics of my major I was doing similar work, but this was a different perspective on the body.”

And that is what launched him into the world of research.

Sophomore year Kramer joined Stefan Sarafianos and Kamal Singh studying HIV and moved to the McSteen Lab to study corn junior year. Now as a senior he continues his niche for research and has added two minors — statistics and computer science — to help understand different types of research better.

In the Sumner Lab, Kramer has looks at research from a computational vantage point. Kramer is working with instruments learning to predict variables for plant natural products and metabolomics.

“At the core, this lab focuses on metabolomics,” Kramer said. “It is the branch of biochemistry that deals with small molecules produced in organisms. The lab studies this field with a wide range of techniques, including mass spectrometry and nuclear magnetic resonance (NMR). These allow the researchers to identify potentially new compounds, determine the metabolite profiles of organisms, and much more.”

Kramer has a training set he has made and is using it to predict other data sets.

“The end goal is to have a model set up so users can input their molecular data and it can compute the model prediction,” Kramer said. “We actually do a lot of plant research, all of our data sets come from legumes or soybeans. It’s just another set of lab techniques used to answer scientific questions.”

Even with Kramer’s current research, he still finds virology something he is interested in. Working in the Sarafianos lab gave him motivation to go to graduate school and continue research in that area.

“If I could answer any questions, it would be how to predict drug resistance,” Kramer said. “All of my research was involved with HIV 1C which is super uncommon in more developed areas, so there aren’t any drug treatments tailored to that. In graduate school I want to make drug compound designs for pharmaceutical companies.”

When it comes to proper health care and medicines, Kramer’s extracurricular activates run parallel with his research. He is vice president of Relief for Africa which is a non-profit student organization that raises money to travel overseas to help the current public health situation in Africa.

However, he wouldn’t have it any other way.

“I think science important to life because you always to keep moving and learn things around you,” Kramer said.