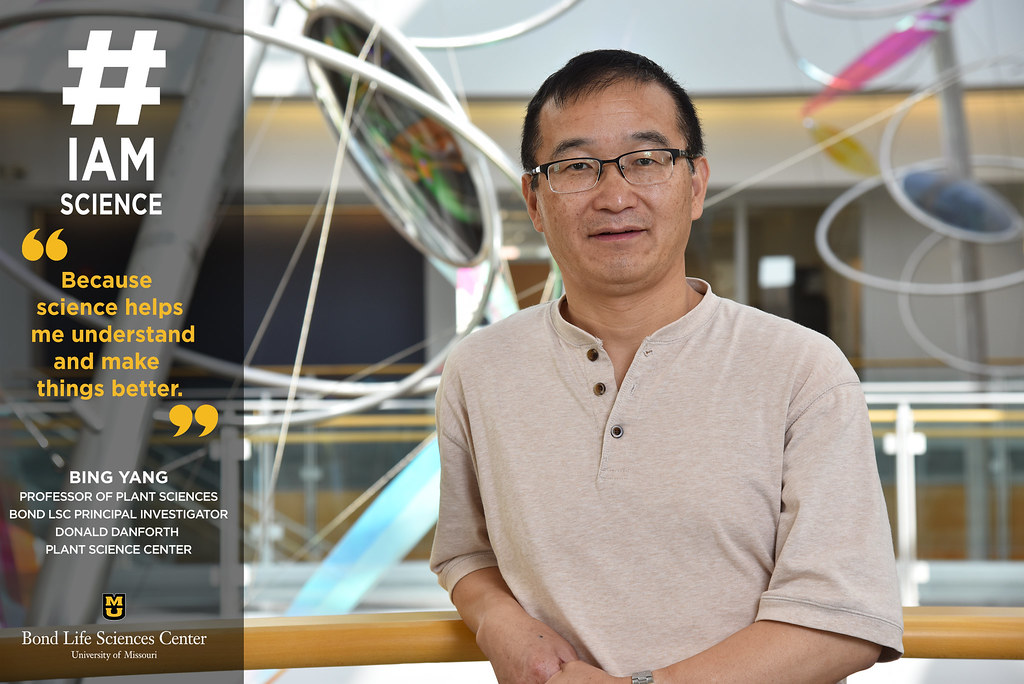 Rice ties together much of Bing Yang’s life.

From his childhood in China where his father farmed the crop to more than 20 years of research on the staple, it’s more than just food.

“Rice by itself is the major crop in the world,” said Yang, one of Bond LSC’s newest researchers. “It provides more than half of the population’s food. Rice is a model crop species and can be used for other crop plants. It can be applicable to other crop species since it is easy to study.”

Originally from Southwestern China, Yang initially went to college at Southwest Forestry College in China and later came to the U.S. for the opportunity to further his education. He studied bacterial blight in rice at Kansas State University and received his Ph.D. in Plant Pathology. He continued this research at Iowa State University where studied genome editing, eventually becoming a professor in Genetics, Development and Cell Biology. He joined MU as a professor of Plant Sciences and joint hire for the Donald Danforth Plant Science Center and Bond LSC.

“I worked at ISU for 12 years and my research in my lab used bacterial blight in rice as a model system,” Yang said. “I started looking at rice from bacterial side and then expanded to look at the host interaction. The possibility for new discovery keeps me excited about the work.”

Bacterial blight is a deadly disease that can kill up to 75 percent of a rice crop. While Yang focuses on this pathogen, his research can expand understanding of the molecular mechanisms behind various plant diseases in a number of crops. Yang hopes his genome editing paves a way to create a more disease resistant plant.

“Especially with the advanced technology we can engineer some crop and rice varieties with better resistance,” Yang said.

But this research is more than new discoveries, it’s a part of who Yang is.

“Rice and the disease relate to my background,” Yang said. “I am from a family in a southwest province of China where we were rice farmers.”

While his lab area may be bare for now, in a few months’ new advances will come with getting his lab up and running on the third floor of Bond LSC.

“It is a challenge to move the whole lab,” Yang said. “But another aspect for this move is we can do some high risk projects. This means nobody has done it before. High risk also means high possibility for failure.”

“Science always means some success, but you also have to fail for scientific research,” Yang said. “To me, science means using some approach or tool to uncover the mystery behind how to make something better.”