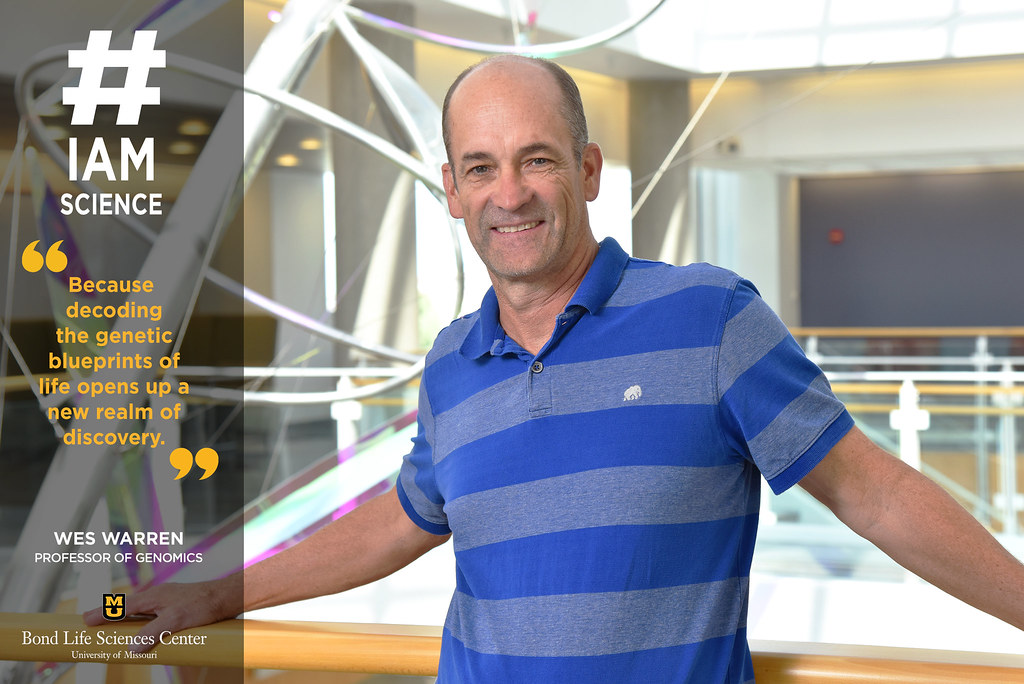 When you walk into Wes Warren’s office you may notice the Charles Darwin bobble head, or the platypus on the cover of Nature magazine or even the shelf of colorful books in the corner.

At every glance, you’ll probably see a picture of a different kind of animal.

Animals aren’t just a passion for Warren, they are the target of his research. Over the past 17 years, he has worked with around: 10 mammals, 6 bird species, 10 fish genomes, five different species of Tsetse fly, sand fly, even the common house fly, and that’s just the beginning.

“I try to keep in mind the question on how the trait evolved and more importantly the similarities in this trait to human diseases,” Warren said. “It’s important that we understand the genetic code of as many species as possible. If we are going to understand not only how to conserve these species and their environment’s we must also understand their complex biology.  The more comparative information we have on these genetic codes leads to a better understanding of their similarities and differences when studying disease origins. Why humans succumb to many types of disease and many animals don’t, remains a mystery.”

Growing up in Florida with a beef cattle family business, Warren always thought he would be a vet. He went to Oklahoma State University for Animal Sciences in hopes of becoming a large animal vet, until he realized his fascination with research. He then went to Clemson University and got a masters in Reproductive Physiology. For his Ph.D. Warren then came to MU and studied Molecular Endocrinology, again in the Animal Sciences field.

And Warren came back here to his alma mater just a couple weeks ago to start his own lab.

“In general the reason I liked the location of Bond LSC was when I was recruited here the thought was I would be the liaison between med, vet and animal schools,” Warren said. “The appealing thing of coming here is the vet school, animal sciences studying domesticated animal genetics and you have the med school doing personalized medicine.”

Warren’s lab may not be set up until the end of this year, but he is excited to make advances in his research.

“One of my objectives at MU is to practice evolutionary medicine,” Warren said. “In an environment that embraces this comparative approach, that really excited me about coming here, and to keep my intellectual fire burning.”

Before coming to Bond LSC, Warren spent his first career years at Monsanto and then felt the need to return to Academia. At Monsanto most of his research was in molecular biology. He also continues to collaborate with the St. Louis Zoo on the unknown causes of high incidences of pyometra urinary in African Painted Dogs.

Warren has published over 130 research articles. The number will only grow as he continues and begins his many collaborative research projects and new research at Bond LSC

“It is very exciting to open that black box of a new genome,” Warren said. “You are the first one to see the codes of life in that species, learning the evolutionary history of each genome and sharing in these exciting discoveries with your fellow scientists. This never gets old.”