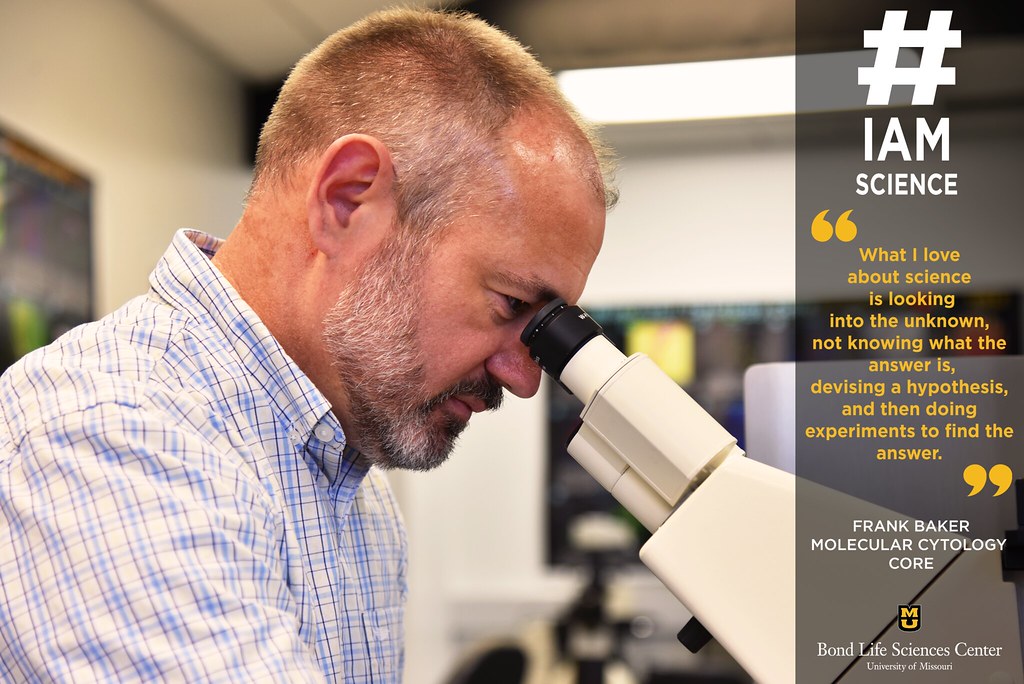 With eyes wide open, glued to metal tubes, researchers from across the University of Missouri’s campus are searching for answers that are unseeable to the unequipped human eye.

The Advanced Light Microscopy Core is a resource for anyone to come and further understand their research. The Core’s Imaging Specialist, Frank Baker, has been an intermediary between the facilities equipment and researchers for four years.

Molecular cytology is the localization of molecules within the cell. In other words, researchers look at molecular methods occurring to understand cellular functions. The core has a number of resources such as confocal, super-resolution and digital light-sheet microscopes.

Though microscopes are normally thought of as a scope to look directly into, new technology is available that can create 3D images on a monitor of the cells.

“One thing I like about working here is it gives me a perspective about the diversity of work being done at the university,” Baker said.

For Baker, one of the greatest parts about MU is its interdisciplinary nature. Any researcher from any department can bring their goals and their problems to the MCC and search for answers, and Baker gets to be a part of that journey.

“And sometimes when the problem is especially confounding, and you have all of these pieces that don’t make sense, you have that mental flash when everything integrates together into an answer. It’s a really beautiful moment,” Baker said.

Baker began his science journey here at MU where he received his undergraduate degree. He then moved on to Berkley to study plant developmental genetics and then did his postdoc at Pennsylvania State.

“I’ve always liked microscopy quite a bit, even in my undergrad days,” Baker said. “I thought, I really do like doing this, and so I decided to make a transfer.”

Baker has been in the MCC for four years now and said he is content for the moment.

“It’s always interesting because people come with new problems and new types of experiments, and so with the job, there is always a goal to keep learning,” Baker said.

On the horizon, Baker can see a future where he directs his own core. He said it’s important to him that it stays fairly broad to serve multiple purposes, similar to the MCC. Baker believes in setting goals and collaborating with others to reach them.

While goals can vary is size and scope, Baker makes it a priority to see both the small and big picture. When he can’t understand something about his research, he finds it useful to step back and take a look at the larger community, or to look at previous work being done on the topic. He values the complexity of science and how a change in perspective can be a shift in understanding.

« What makes us trust science?» B TrCP protein required for HIV to hide in host cells