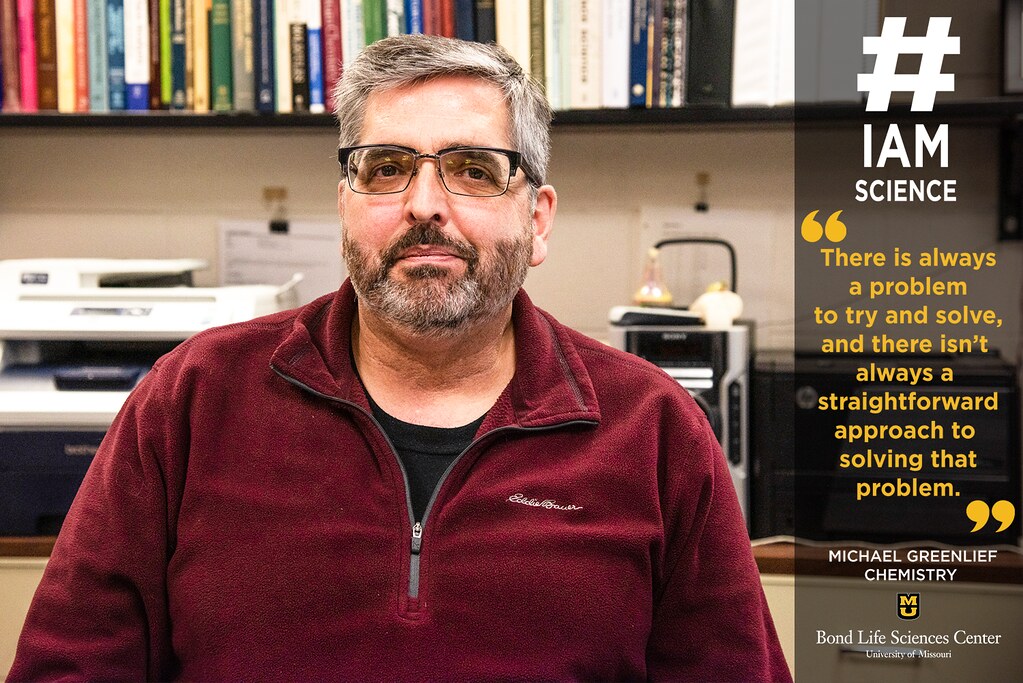 In high school, Michael Greenlief had teachers that led his curiosity into a passion for science and problem-solving.

Decades later, he is an associate professor of chemistry at the University of Missouri and director of Charles W. Gehrke Proteomics Center located in Bond Life Sciences Center.

Depending on the day, Greenlief could be found many places on campus, but his favorite part of MU is working with students.

Through all aspects of his roles on campus, there exists an underlying educational component. From lecturing in class, to teaching young scientists how to use advanced equipment, Greenlief enjoys helping and talking with young minds in a field that is anything but regular.

“Chemistry is always changing,” he said. “I don’t get bored that way.”

Proteomics is the study of the structure and composition of proteins, and Greenlief’s core facility and lab use mass spectrometry to make these discoveries.

Greenlief enjoys the complexity that comes with science.

“There is always a problem to try and solve and there isn’t always a straightforward approach to solving that problem,” he said.

Whether it’s health related, environmentally related or anything in between, he believes that science isn’t just something that exists in the lab.

“Even though some of science seems esoteric, in the end, it always comes back and looks at something in the real world,” he said.

Greenlief has been at MU since 1989 and has experienced the transition that science has gone through since that time. He said the changes are a matter of complexity and expertise.

“The questions that are being asked and that need to be addressed have become more complex, and tied to that is expertise. Since it’s more complex you need more expertise than you may have by yourself,” he said.

He said that much of science now depends on interdisciplinary work, so scientists have had to learn to work well with one another.

“When I first started here the way to build your career was through what we call a single-investigator; it was your project, you did things by yourself,” he said. “The problems I’m addressing now I can’t solve by myself, so I have to talk and work with other people. And then together we can tackle something that we couldn’t do individually.”

Looking to the future Greenlief doesn’t plan on going anywhere.

“I’m interested in trying to push the limits of what we can do with protein analysis,” he said. “How we can do things quicker, at lower concentration, or smaller amounts and still find the same kinds of information.”

Greenlief plans to continue educating and learning from the students he interacts with across campus, helping to influence the next generation of science and scientists.

Learn more about the Gehrke Proteomics Center and services this MU Core Facility offers at proteomics.missouri.edu.