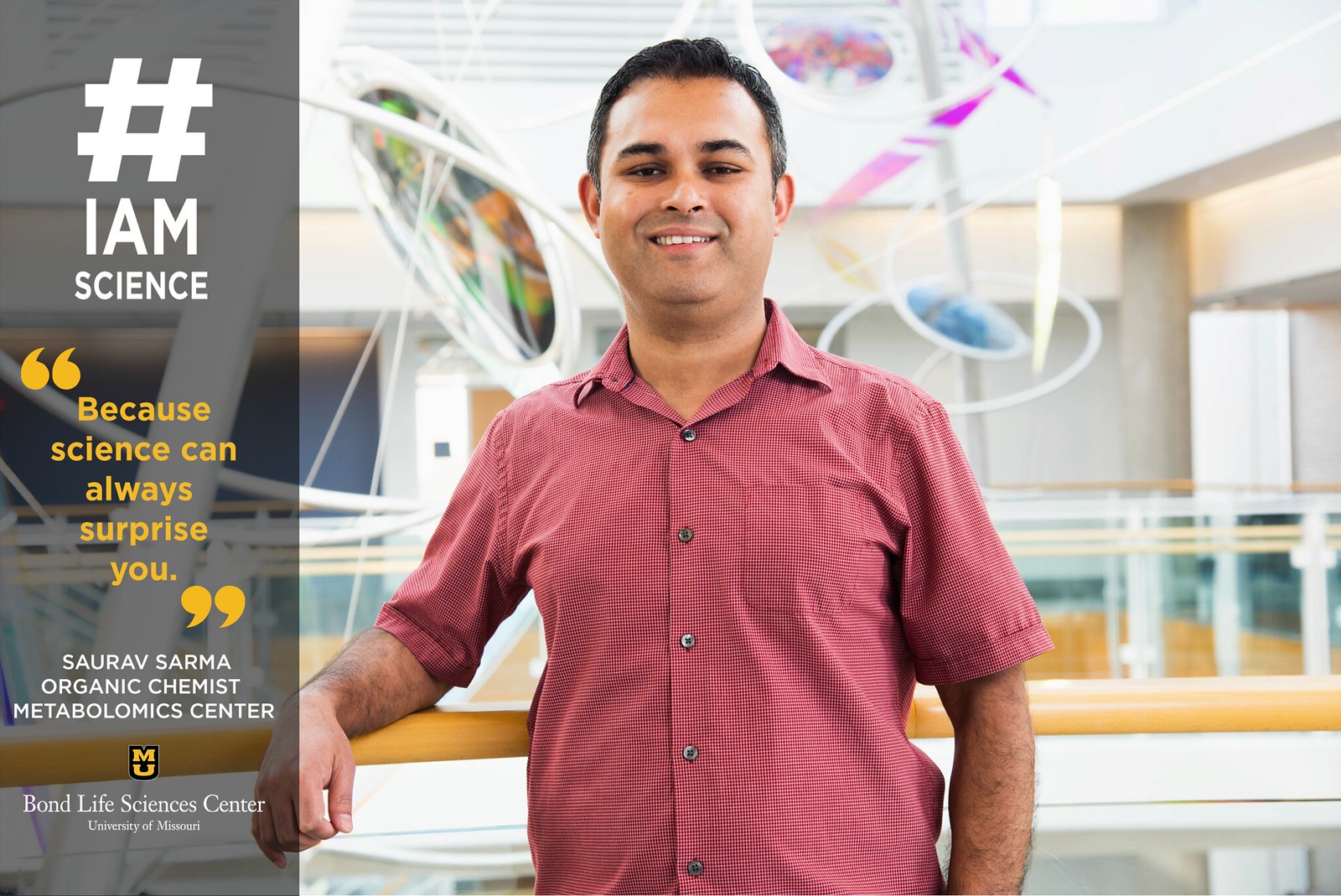 Saurav Sarma grew up amongst tea plantations and medicinal plants in the northeastern corner of India near Tibet, a state called Assam.

His day-to-day observations of the plants sparked a curiosity that eventually led him to a career looking at the chemical building blocks behind it all in the labs of Lloyd Sumner and the University of Missouri Metabolomics Center at Bond Life Sciences Center.

His interest revolved around the connections between carbon, oxygen, nitrogen and hydrogen, which make up living systems.

“How they’re connected makes all the difference,” he said.

Sarma enjoys working in the metabolomics core because of the incredible facilities and collaboration. Among other things, his job is to look for thousands of molecules to find biomarkers for various diseases.

“The purpose of the core is to profile the small molecules,” he said. “So, for example, a group might want to see the molecular differences between a healthy plant and a diseased one. There are thousands of molecules, so you need sophisticated techniques to profile those molecules because they are otherwise unknown.”

Sarma works with people on and off campus who are curious about the molecules in their areas of research, but he also does data analysis, communication and collaborative research project. He enjoys the diversity of his job, which is focused on how molecules shape our lives.

“Finding something new is always exciting,” he said. “Science can always surprise you.”

While he finds this research to be fascinating, he also enjoys how it can help people and push civilization forward. From health to the economy to agriculture, he said science benefits us in ways we often don’t realize or think about.

“So, it’s not that my work is great, it’s that everybody’s work is great,” he said. “Everything that we use nowadays didn’t come up in one day, it’s from people’s hard work over many years, and maybe someone will benefit from our work in the future.”

Things may not always go as planned, but he doesn’t let that stop him.

“In science, nothing is a failure,” he said. “The knowledge you are generating today is helping researchers in the future, so learning how to deal with failure and keeping an open-mind is important.”

He said that it’s easy to get stuck in mental patterns, and by keeping an open-mind, you’re more likely to see or think of things you might not otherwise see in your own research, in conversations and daily life, too. Many of the most important discoveries of humanity occurred outside of the normal paradigm. And while ‘failure’ can be challenging and frustrating, he said it makes the success more significant.

“As a synthetic chemist, I run a hundred reactions and maybe 10 work and 90 fail,” he said. “So, it helps you to deal with failures, but it also feels great when you reach a goal. You are getting through hurdles and it gives you this satisfaction of getting something done that wasn’t easy to get done.”

He received his undergraduate degree in science, followed by a masters in organic chemistry before making the journey to North Carolina for his Ph.D. in medicinal organic chemistry. After his Ph.D., he arrived at MU in the radiology department for his postdoc. While there, he developed a trimodal drug delivery system called closomer to help minimize the side effects of cancer.

“I was fascinated by working with drug delivery systems, but then again, it was about molecules and their characterization and identification,” he said. “That’s been a binding thing throughout all of my research.”

Apart from science, he loves the classics – literature, music, sports and movies. He’s currently reading “Thousand Splendid Suns.” He also loves hanging out with his four-year-old daughter watching cartoons. “I don’t have any exceptional hobbies,” he said.

A personal career goal of his is to develop sophisticated methods for exploring more of the chemical space that is still unknown, and he hopes to see a greater breakthrough for cancer treatment in his lifetime that allows for less pain and side effects.