Regulating a balance between protection and growth 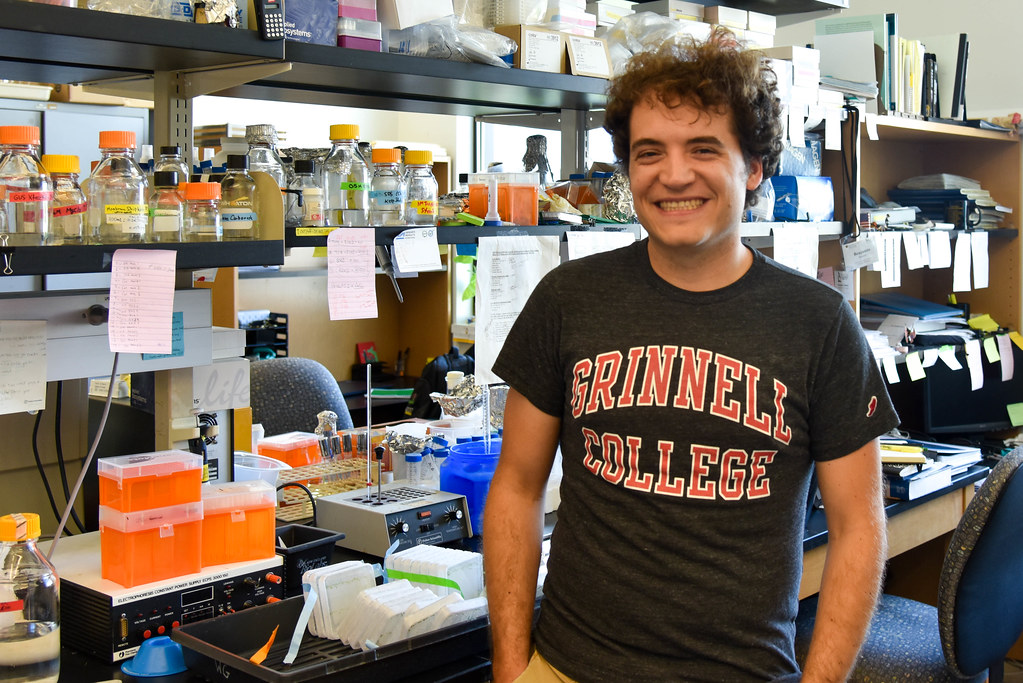 It’s a sensitive balance between growth and defense when it comes to plants.

While a built-in, passive immune system helps them survive attackers, this response halts the growth and development of the plant, something that fascinates Ben Spears in the lab of Walter Gassmann at Bond LSC.

“In our lab, we try to pick apart the different signaling pathways governing these processes of growth and maintaining an immune response; we think of them as distinct processes, but, in reality, they are all interconnected,” Spears said. “If we can unlock the ability to manipulate how these signaling pathways work together to allow the plant to decide whether to grow or protect itself, it’ll go a long way toward producing plants that are better adapted to their environments.”

That’s what has led Spears to work with the Arabidopsis TCP Transcription Factor family. Transcription factors are proteins that “turn genes on or off,” as Spears puts it. They selectively activate certain sets of genes by interacting directly with family-specific sequences of DNA.

Spears is a postdoc researching molecular plant genetics such as the plant-specific (TCP) transcription factor family. Classically, the TCPs — named for early family members TEOSINTE BRANCHED1 (maize)/CYCLOIDEA (snapdragon)/PROLIFERATING CELL FACTOR (rice)— have only been known to regulate things such as branching, leaf size, growth, and other external structures of the plant, but, more recently, the Gassmann lab and other groups have identified them as regulators of immunity, making it the perfect subject of research. Spears focused on one of the multiple layers of this function to hone in on immune response in this family of transcription factors. 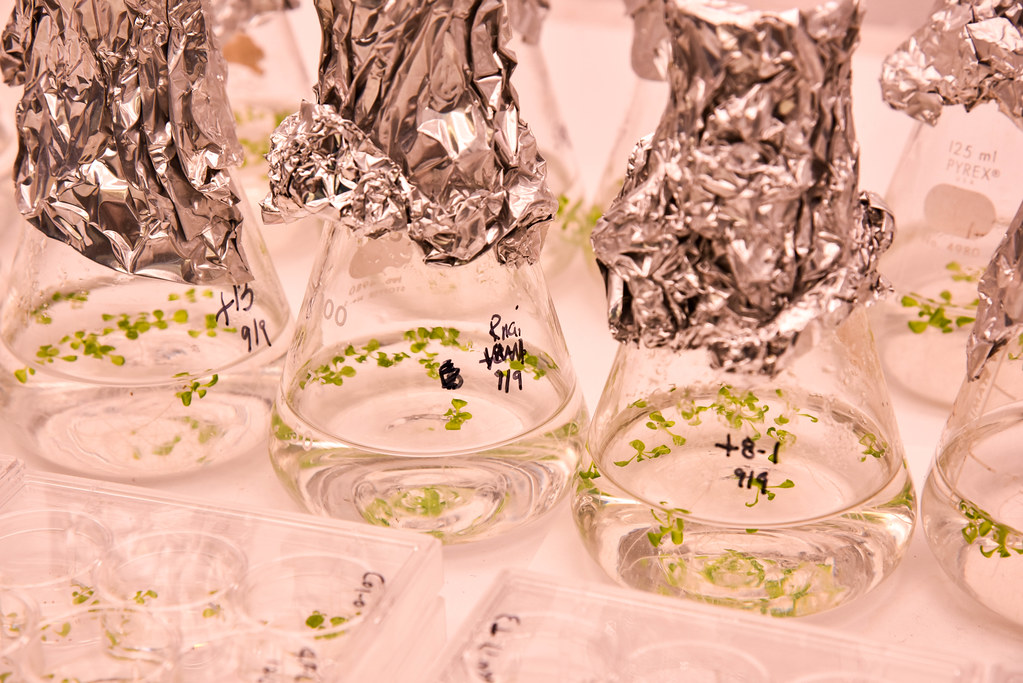 At the surface of a plant cell, there are receptors that will identify the presence of bacteria, and then initiate an immune response in the plant. Spears found that several members of the TCP family seemed to turn on this immunity process. This discovery, along with previously understood processes of growth in TCP showed that these two responses are tied together locally. It is this connection that has sprouted a high level of excitement and interest in the hormone biology research community recently.

“In terms of overall impact, this is a really exciting family of proteins,” Spears said. “They’ve been on the scene for a while, but only recently they’ve started to explode in terms of broad interest in the field. It’s nice to work on something that others are interested in, it makes you feel like you’re doing something that could potentially have an impact.”

Spears said it always comes back to the tradeoff between these two plant processes.

“A plant may be immune to pathogen infection, which is great because agronomically we want our crops to not be affected by pathogens out there, but it can come at the cost of growth, which affects the yield,” he said.

There’s a tight regulatory control system in plants that decides how it will spend its energy resources, and it’s affected by factors such as heat, water, light availability, or pathogen stresses. If researchers can better pinpoint the connection of these growth-immunity processes, they are one step closer to creating crops that can be better suited to their environments.

The nuts and bolts of this work involved a lot of bacterial infection assays and basic genetics, but a new technique presented a challenge for Spears. Chromatin immunoprecipitation (ChIP-Seq) technique helped demonstrate the direct interaction between Spears’ protein, the transcription factor of interest and the DNA. He said it was tricky for the lab because they hadn’t tried this method before, so he had to consult outside resources and push himself to learn new skills. Transcription factors control the rate at which a cell converts the DNA blueprint into the RNA messenger that carries the instructions to make proteins for a cell’s structures, enzymes and signaling, among others.

Collaboration across scientific fields almost always leads to better science, and Spears said conversations with researchers of different expertise helped push him into the next portion of his research. A common theme amongst researchers in Bond LSC, he values the community atmosphere and intellectual diversity.

“This study focuses on the other side of the equation, plant growth, and the role that TCPs may play in the plant response to brassinosteroids, an important group of phytohormones controlling plant growth,” he said.

After two years of work and a successfully published paper, Spears entered this next phase of research, a launchpad into a second experiment on brassinosteroid signaling. He’s trying to figure out how this operates on both sides of growth and defense at the same time.

“There is what we think to be a large regulatory transcription complex that these transcription factors may be a central component of, so the piece that actually does the work turning genes on and off,” he said. “There’s still a lot to learn.”

Ultimately, Spears and others are interested in more clearly identifying how TCPs interact with and/or are controlled by these other pieces to help plants decide whether to defend or to grow. 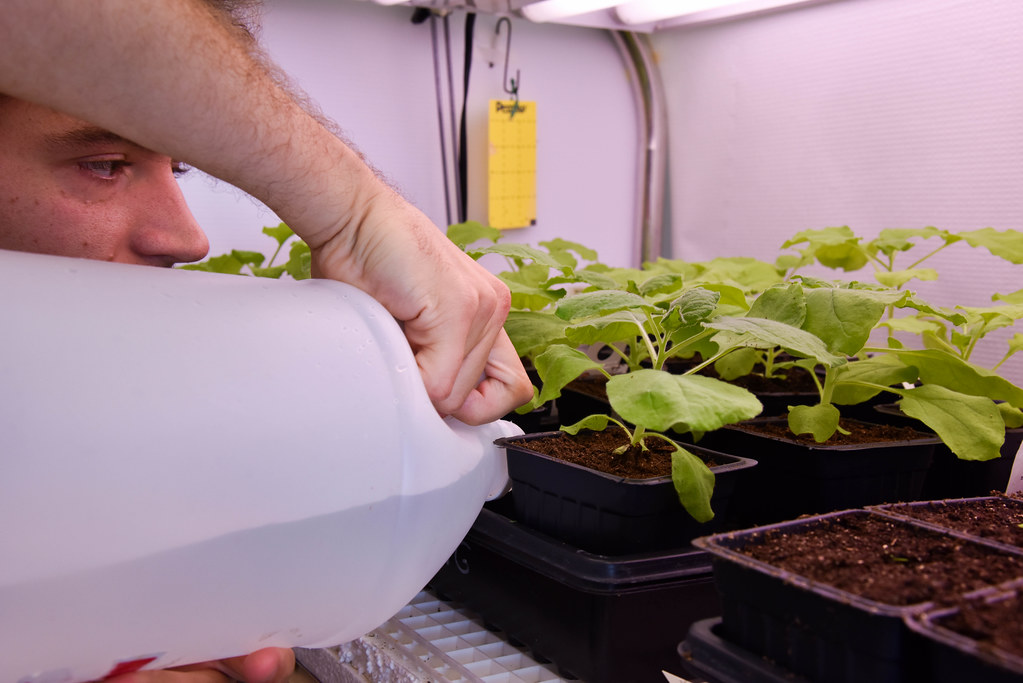 Researchers are interested in this because the intricate trade-off affects agriculture in significant ways.

“Yield is important to a world that is desperately going to need to feed people in the future, specifically under increasing amounts of duress,” he said. “Growth environments aren’t getting better; they’re changing, and when things change, host-pathogen interactions change too. In the future, microbes that weren’t necessarily pathogenic might become pathogenic because of shifts in temperature, humidity and light that is available to them.”

Since proteins secreted from a pathogen ‘target’ the TCP-family and biochemically change how the TCP protein works to promote infection, it’s only natural for scientists to try to lessen the hardships crops endure. So, it should be clear that if pathogens are interested in specific transcription factors, then researchers should be, too, according to Spears. If researchers can better understand why and, by extension, tell what the transcription factors are doing, then they can potentially understand how to knockout that weak link that allows for infection and limit an attack within the plant.

Spears said that the interactions between a host and pathogen change faster than researchers can change to combat it, so they must better understand what those pathogens are doing to continually be better in the future. He said this research has the potential to help a world that needs reliable agriculture. Though some parts of the research were stressful, a great team made it a fantastic experience.

Part of this research published in the journal Molecular Plant-Microbe Interactions in May 2019. Read more specifics in the paper “Direct regulation of the EFR-dependent immune response by arabidopsis TCP transcription factors.”