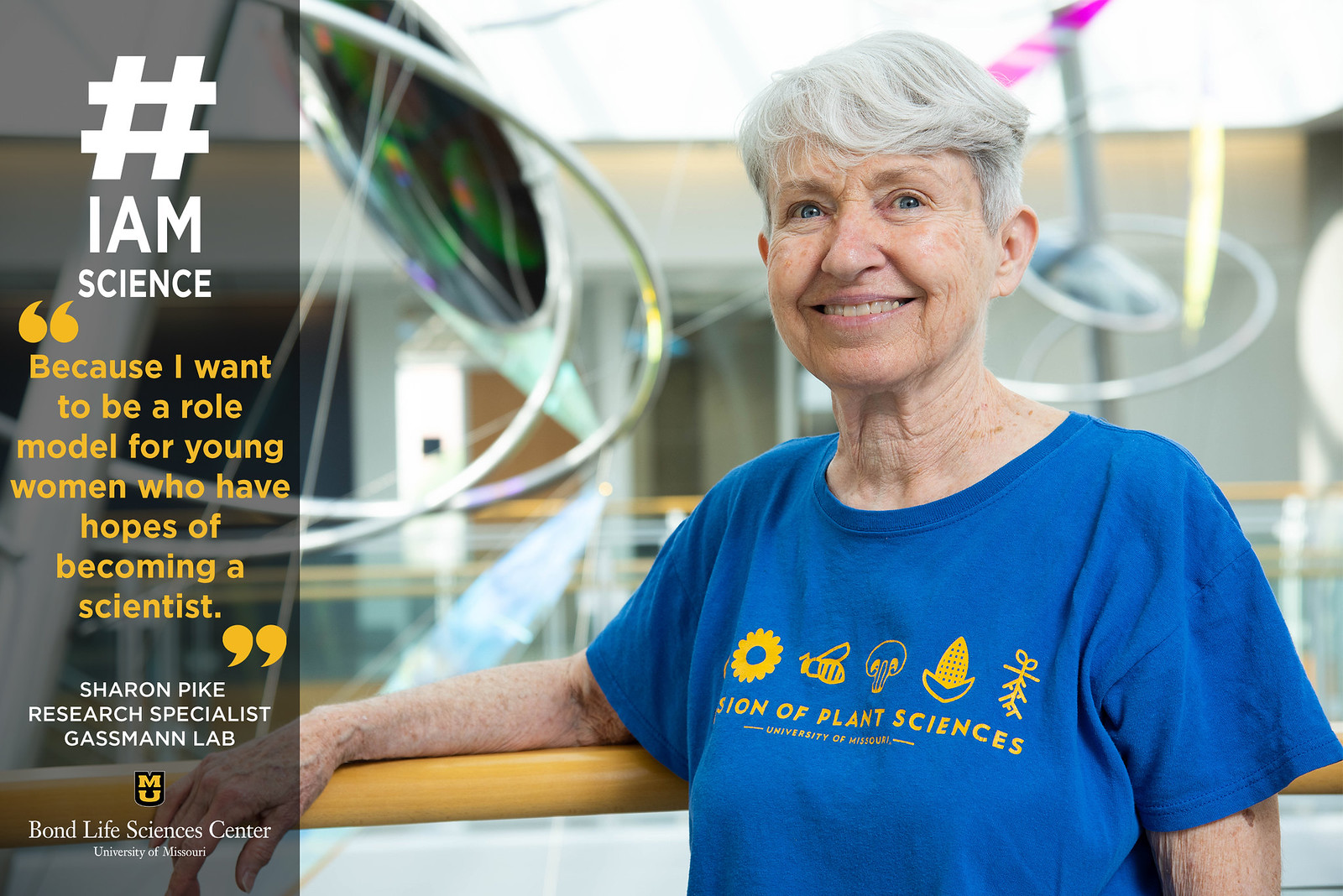 Sharon Pike grew up in an era that didn’t encourage young girls to pursue fields predominantly occupied by men. Through trial and error in various careers, she eventually landed a spot as a lab technician at MU in 1985. Since then, she found her passion and voice in science, and at the age of 77, she doesn’t plan on leaving anytime soon.

Pike felt the limitations of being a girl, growing up in the Midwest and lacking the financial means to obtain an education beyond the undergraduate level. But, she was inspired by figures such as Marian Anderson, Madame Curie and Ruth Bader Ginsburg who defied the odds to become prominent female figures in their field.

“When I graduated high school in 1960, there were an awful lot of professions that ended in man. Policeman, fireman, draftsman and postman. Some professions didn’t end in man, but it was understood that men fulfilled those roles, such as scientists and doctors,” said Pike, lab manager for the Gassmann lab in the Bond Life Sciences Center.

Positions such as teachers, social workers, nurses, secretaries or laboratory technicians were acceptable positions for women in the 60s, so Pike began her career as a teacher but quickly found it was not for her. She went through a series of positions such as a counselor for elementary school students, ran clinical studies at the Child Development Lab at MU and taught a self-contained classroom for children with learning disabilities. None were the right fit for her.

From there, Pike moved away from teaching and began drafting infrastructure maps for Telecom Engineering. Before AutoCAD and graphic design, engineer drafters had to use Leroy Lettering Sets to draw large-scale maps by hand. She appreciated the attention to detail it required and settled into a routine as a drafter for the next 10 years.

The position with Telecom Engineering allowed Pike the freedom to raise her daughter. She was able to be a scout leader and a 4-H leader, but after she was laid off, she craved something more.

“After they laid off the draftspeople, I went to another company that was doing surveying of municipal sewers and parking lots. I drafted with a lady name Dori Novacky who mentioned her husband was looking for a lab technician,” said Pike, “I told Dori that if I could do it all over again, I would begin with science.”

In 1985, Pike became the lab technician in Anton Novacky’s lab and, within the year, she was acknowledged at the end of one of his papers for her helpfulness and her assistance. After that, it was her goal to be a published author, and eventually, she did. But it didn’t make her as happy as she thought it would.

Pike helped Novacky by using her drafting skills to letter on posters, editing drafts of research papers and holding down the fort while he was on extended research trips.

“While I was here and he was off traveling, I was going to things that he would have normally gone to, like meetings and stuff like that, because he wasn’t here,” Pike said. “I ended up doing a lot and being an author on a lot of things, sometimes for the editing I did and sometimes for the work I did.”

When it was time for Novacky to retire, Pike came with the lab and the equipment that would be passed on to the next researcher.

“I held down the lab for two years while they were looking for someone to replace Anton. Walter started here in 2000 and, like the furniture, I went with the lab. I was part of the package,” Pike said. “It’s really neat that we got Walter because he was one of the very few people in the United States who could use my skills.”

Although Pike likes editing papers and conducting research, her real enjoyment stems from working with international students and serving as a role model for young women who want to pursue science.

“I’ve always tried to make it a home situation for our international students,” Pike said. “I’ve provided transportation and I’ve helped them furnish their apartments and sometimes they’ve stayed in my house when they needed a place to stay for a while.”

Pike enjoys taking her fellow lab members to activities around Columbia and the state. When the lab had visiting scholar Amparo Sanz from Spain, Pike took her to the Missouri State Fair, the Botanical Gardens and a tour of southern Missouri. Additionally, she has attended Spooktacular, Homecoming House Decorations and the Unbound Book Festival with her lab mates as well as First Friday’s in Columbia’s Arts District. She also makes it point to celebrate everyone in the lab’s birthday and throws farewell parties for departing students, staff or scholars.

With all of her international friends who she’s met over the years, Pike has visited many of them in France, Japan, China, Germany, Switzerland and Slovakia. And she has invitations to visit Spain and India, both of which she intends to visit soon.

“Growing up I always wanted to have friends in other countries. It was a surprise for me that in science I get to have friends from all over the world now,” Pike said. “I show them here and then I go visit there. I love showing them our culture and learning about theirs.

At the age of 77, Pike doesn’t plan on leaving the lab in the near future.

“I think one reason is because of not being able to get started. I was 43 when I got into science and I feel like I haven’t had enough time with it,” Pike said.

Throughout her years in the Novacky and Gassmann labs, Pike has worked on numerous research projects. Specifically, Pike has done microinjecting of frog egg oocytes with genetic instructions to make plant transporters in order to test their functions. These transporters shuttle molecules across membranes to get things into and out of the plant cell structures, and scientists use this frog egg system to help figure out what exactly each transporter does.

Pike plans on staying with the lab for another three years if she can continue editing papers and helping members of her lab. She particularly enjoys the editing aspect and is looking for ways to be a mentor and editor for her colleagues’ papers even after she retires and moves on from the lab.

“I think I’ll be in St. Louis within the next three years because that’s where my daughter lives. I want to buy a house and live in a neighborhood and have a life. I want to enjoy the festivals and activities going on around St. Louis and continue to live my life.”