“Science is concrete, but it isn’t rigid. Research is constantly new and fresh.” 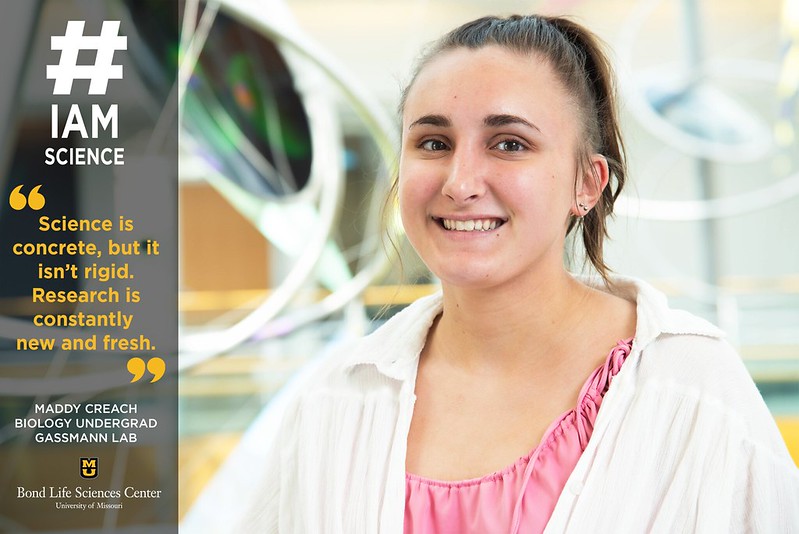 For Maddy Creach, a scientific career was always the end goal, and television and books have played a part in that inspiration.

When she was a kid, her “big science nerd” of a dad watched NOVA all the time with her along with dinosaur documentaries, and she could always turn to him for support in her career aspirations.

That support has continued for her current dream — to work for NASA’s plant research team. Astronaut Scott Kelly’s memoir, which dives into his work on growing plants in space, was really influential to the sophomore who currently works with plants in Walter Gassmann’s lab at Bond LSC. The challenges Kelly faced such as carbon dioxide levels and malfunctioning filters got the gears in Creach’s mind turning.

“I just think it’s the most pressing issue, with climate change and all, to look into long term space research,” she said. “I love the idea of what we can learn in space – the possibilities it holds.”

Creach comes from the land 30 miles south – Jefferson City, and she said she was always good at math growing up, so people often put her into science classes, too.

“When I was in sixth grade, we did this genetics unit and I thought it was the coolest thing in the world,” she said. “So, I wanted to be a genetic counselor, and then eventually I realized that lots of people are suffering, and if I go into research I can help with genetic diseases.”

But her goals were constantly evolving, and landing in a lab freshman year continued to change her. She got her start in the Gassmann lab through the plant sciences freshman research group, in part because of her ambition of getting into a research lab as soon as possible. But that chance placement has grown into a love for a field she sees as the future of research.

Creach enjoys how focusing on the basics, such as a single protein, can be incredibly useful. She sees research in its purest form as a possibility to understand the nuance of science in its pursuit to understand. Science is both concrete and open-ended in her mind, and the combination of those two things brings her back to her research every day.

“In the sciences, I like that biology is much more situational; you can’t apply one concept to everything else, it’s just a little random,” she said.

Outside of research, she loves to read, mountain bike, hike, camp and generally be outdoors. Lately, she’s been reading the classics. One of her favorite books is “Forgive Me, Leonard Peacock,” which is a fiction book that touches on heavy topics such as suicide. She said it was really eye-opening for her and she still thinks about it regularly. Another book that has stuck with her is “Where Bigfoot Walks.”

“I love that book,” she said in between laughs. “I am of the school of thought that Bigfoot is 1,000 percent real and out there, but I don’t think that he should be discovered; that would ruin bigfoot.”

Now halfway through her second year, she’s working with other undergrads in the bioinformatics and plant science program. She grows the plants and collects the data, and the computer scientists analyze it. She says her eventual goal from studying biology is to get into a Ph.D. program in biology or plant sciences.

“The past two years have changed the way I think about science education,” she said. “You can hear a million lectures on something, but you can’t really understand it until you apply it. It was really hard at first; it was like trying to translate Spanish having no knowledge of Spanish.”

Like many others, she appreciates the ability to learn from and work with different labs in Bond LSC. Trying to understand it all and presenting her research — especially to the knowledgeable people in this building — is a huge challenge for her that she said can be a little intimidating.

“I’m working toward it,” she said.