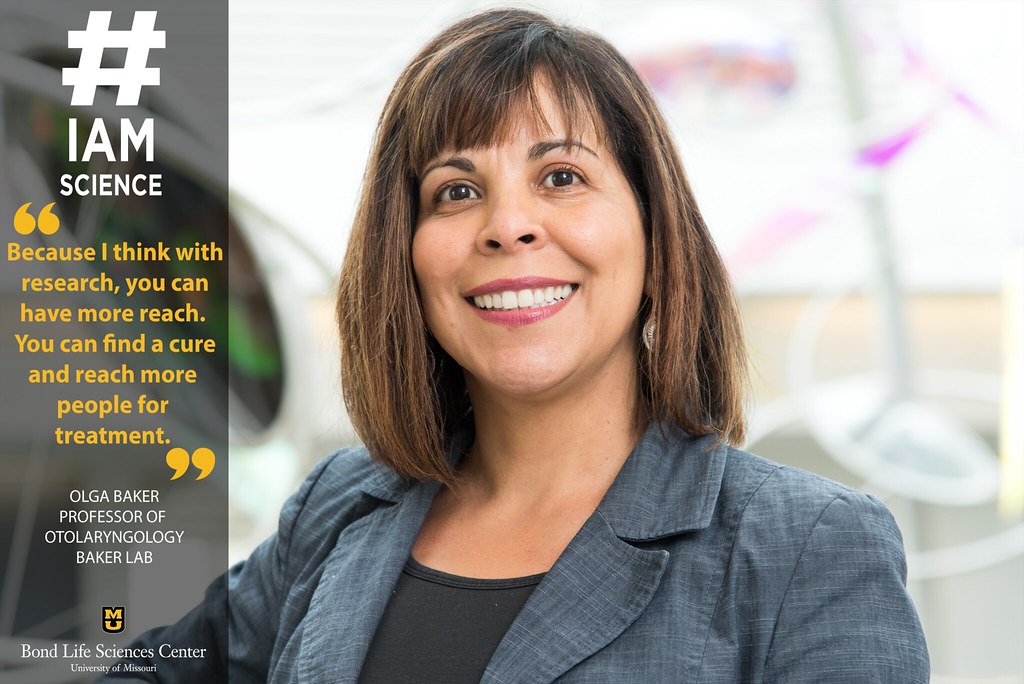 Olga Baker, professor of Otolaryngology, will join Bond LSC June 1, 2020, as our newest principal investigator with a focus on inflammation. | photo by Roger Meissen, Bond LSC

Olga Baker is the type of person who acts when she sees a problem.

In her home country of Venezuela, Baker worked as a dentist who was part of a team that treated head and neck cancer patients.

“They told me how much they suffered as I used to do their cavities and fix their teeth,” Baker said. “That’s how I became so motivated, because I saw their suffering myself.”

These patients stopped producing saliva due to radiation from their head and neck cancer treatments that destroyed their salivary glands.

“Because they look okay everybody thinks they’re normal and they’re healthy,” Baker said. “Nobody knows the suffering that is ongoing inside them, so this brings a lot of psychological burden for these patients.

That motivated Baker to enroll in a biochemistry Ph.D. program at the Central University of Venezuela which she completed in 2003.

Ever since, Baker has been studying salivary glands, tissue regeneration and Sjögren’s syndrome at multiple universities

That passion led Baker to Mizzou initially as a post-doctoral fellow in 2003.

Baker moved from her post-doctoral fellowship to become a senior researcher at Mizzou but left in 2009 for the State University of New York Buffalo to accept an assistant professor position as an independent investigator to gain more experience. In 2014, she then moved to the University of Utah School of Dentistry as a tenured associate professor.

“I later on decided that it would be nice to be close to home because my husband is from Missouri,” Baker said. “So, working with many people who helped me to be here, I applied to MU and made my decision to come back after seeing all the possible scientific collaboration with great colleagues.”

This time around, Baker will have her own lab to find ways to treat salivary gland hypofunction and to develop the products that sprung from prior work at the University of Utah where Baker created her own business

She aims to further create and distribute saliva substitutes in her business venture using proteins in saliva called mucins. Baker isolates mucins from plants and animals to be used as a mouth spray to moisturize people’s oral cavity who otherwise can’t produce saliva.

“So then with that they can eat better, they can talk better, and that lasts long in their mouth,” Baker said.

Baker plans to bring it to market while working at Mizzou.

Due to having so much expertise in the salivary field, she’s also studying how to prevent COVID-19 from infecting patients through saliva

“COVID-19 is found in saliva, and that’s very important because we could find ways to prevent transmission if you block the entry into saliva. So that’s a new area of interest for my lab.

Baker will be opening her lab on the fifth floor working on inflammation. She plans on being part of the inflammation group at the LSC with Michael Petris and her former colleague Gary Weisman

“I think it will be very rewarding for us at Bond LSC if she locates a lab there because there are people ready to work in her area of research with her,” said Weisman, Curator’s Distinguished Professor of biochemistry.

Baker and Weisman plan on further studying Sjögren’s syndrome, an autoimmune disease that also causes dry mouth, dry eyes and a number of other systemic symptoms.

When Baker isn’t fighting for a cure, she enjoys her other passion — singing and dancing.

She was a lead singer of a band called, Peña Flamenca, who used to play in the Music Café (now known as Café Berlin) and also appeared on a TV show, Pepper and Friends, as part of Hispanic Heritage Month.

Even though she isn’t part of a band anymore, she still dances.

“I really enjoy that part of my life, being a singer and dancing and bringing joy to people,” Baker said.

Baker’s mission is to solve the oral health problems she encountered, and her journey isn’t over yet.