May 29, 2020 By Lauren Hines in #IAmScience Tags: bioinformatics, computer science 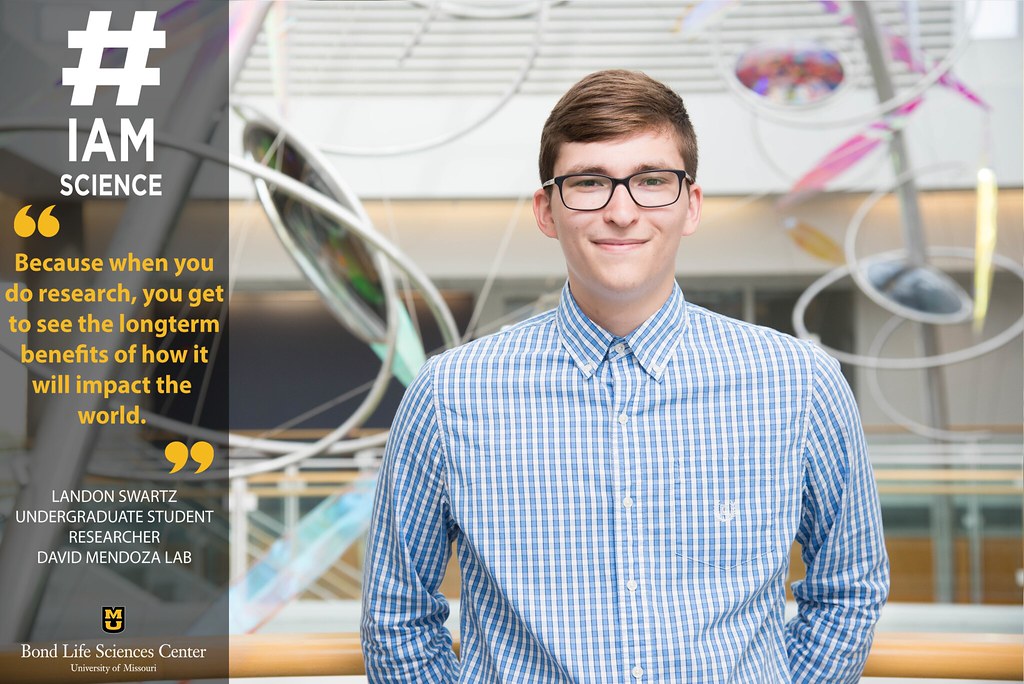 Landon Swartz, undergraduate student researcher, is motivated by a simple desire — to help others through the power of computer engineering.

Coming from Springfield, Missouri, Swartz decided to go to Mizzou in 2017.

“I chose engineering,” Swartz said. “It fits my idea of solving problems, but also lets me be able to see a benefit to people.”

Swartz got involved in research through the honors college after he talked to David Mendoza, associate professor in plant sciences and Bond LSC investigator. Mendoza was looking for people to help program and build his data collection machines.

“Robotics is right up my alley,” Swartz said.

In the Mendoza lab, Swartz was modeling the robot and programming it to move, take pictures and run diagnostics.

This experience eventually led Swartz to win the summer 2020 Cherng fellowship from the MU honors college. The nine-week research program provides networking and presentation events along with a $1,000 project expense account.

“It feels really great,” Swartz said. “It was really nice to be able to win that because you do have to plan a full project, like, the beginning, middle and end of everything. So, it’s nice to be able to not only plan that out, but to actually get to do it and get the funding and support to do it.”

The fellowship will help Swartz create his own idea for a robot. After seeing the potential of the robot that images root growth in Mendoza’s lab, Swartz wanted to expand it further by adding an automated hydroponic system.

The system will help researchers easily control variables that will affect the plant and watch how physical traits are affected.

“The reason I came up with the idea for hydroponics is because after watching my lab mates try to do hydroponics, it’s a very labor-intensive procedure,” Swartz said. “It’s a very error prone procedure because you have to do everything manually.”

In addition to saving time for researchers, the robot will also potentially help eliminate human bias in research and increase efficiency.

Since Swartz’ project straddles plant biology and engineering, funding can be hard to find.

“If you can’t find that enthusiasm from grants or any other place, you kind of have to figure it out along the way,” Swartz said. “So, this fellowship will help us a lot with kind of establishing more examples of how you can use automated phenotyping.”

When Swartz isn’t working in the lab or going to his computer engineering classes, he can be found practicing bass guitar, playing the trumpet or running the soundboard for a college ministry on campus.

“Whenever I get confronted with a problem, I usually go and practice for a while just because I feel like it opens up another side of my brain,” Swartz said.

Swartz has been playing the trumpet since middle school and the bass guitar since freshman year of college. Swartz sees the importance of his research even in music.

“Seeing where engineering intersects with plant biology and healthcare and going back to music, like audio equipment, things like that, there’s engineering and everything,” Swartz said.

Swartz sees the potential and power of computer engineering and how it can help people and researchers alike. He plans to be in the lab this summer to try and make that potential a reality.

“Knowing you’re going to be a piece in a puzzle to something greater…. that’s what keeps me going,” Swartz said.