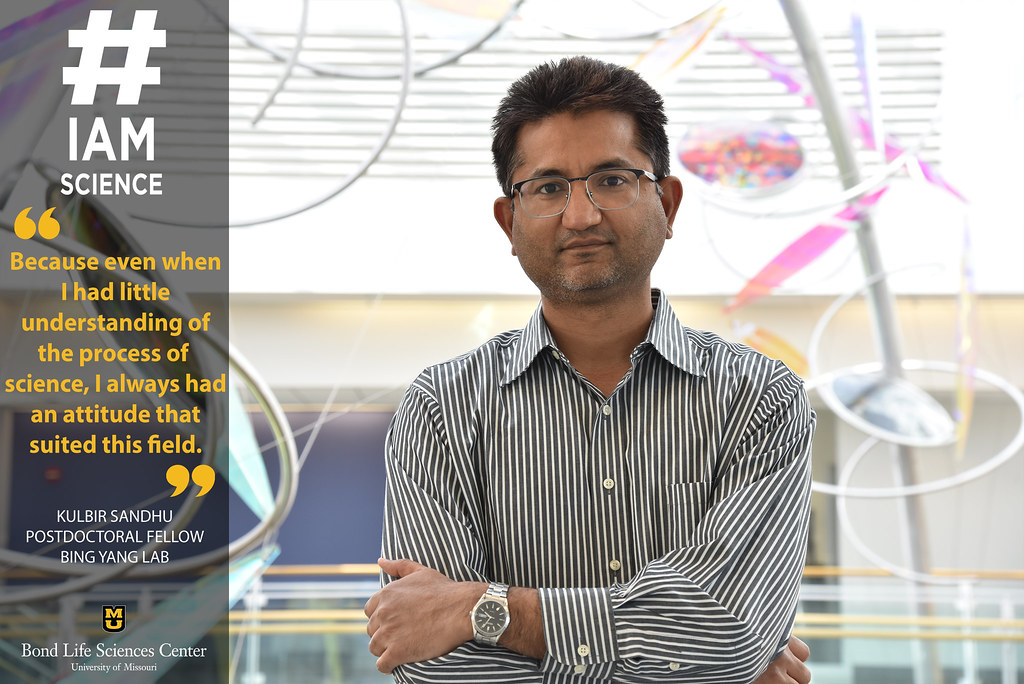 Kulbir Sandhu’s curiosity had guided him from place to place, but it was his fascination with plant science that has stayed the same.

While Sandhu has been a postdoctoral fellow in the Bing Yang lab at Bond Life Sciences Center for the past six months, his path towards plant science began when he was 18 years old in his home country of India.

In high school, Sandhu was drawn to the biology route because of helpful and enthusiastic science teachers. He grew to like it as time went on and found that the subject came easy to him.

“I always had, you could say, a ‘scientific’ attitude,” Sandhu said. “Even when I had little understanding of the process of science, I always had an attitude that suited this field.”

Sandhu also received support and inspiration regarding science from his father, who was an engineer.

“When I was young, my dad used to help me with school homework,” Sandhu said. “His favorite subject was maths, and so he always insisted that I do well in maths and science. In this way, it became natural for me to develop an inclination for these two subjects. In India, most students interested in science choose either maths or biology streams after 10th grade. Initially, I wanted to be a doctor, so I chose biology, and it was more of a happenstance that I ended up becoming a plant ‘doctor.’”

Years later, Sandhu received his Master’s in plant breeding from the Punjab Agricultural University in Ludhiana, India in 2003, and in 2013 he received his Ph.D. at Washington University.

Sandhu first met Bing Yang four years later as a postdoctoral fellow at Iowa State University. Since they worked on a previous project together, Sandhu became a great addition to the Yang lab when he joined in November last year.

While Sandhu is working on a few projects, his main one involves using the gene-editing tool, CRISPR/CAS9, to target genes in Arabidopsis that code for reactive oxygen species. ROS helps plants with signaling, development, stress responses and other processes.

ROS is also part of the plant’s innate defense system against pathogens. Understanding how pathogens overcome this primary defense system of plants is necessary to breed better resistant crops and reduce environmental impact due to chemical control.

By causing these gene mutations, he prevents ROS from being formed in cells. That way, they can compare the mutant plant to a wild type and see the difference in basal-defense responses.

“Now this is exciting again because we are working in CRISPR in field crops as well as in basic science,” Sandhu said. “So, I get to do both things.”

First-year researcher Jack Ogilvy has been working on this project with Sandhu for the past three months as part of the Freshmen Research in Plants program.

“This is my first time … mentoring someone, and by this experience, I have realized that it is equally beneficial to me,” Sandhu said. “I mean … talking about scientific concepts helps create a deeper understanding, and both parties gain from this interaction.”

Together, the two are learning more about ROS and the Yang lab.

“He cares more about just being a mentor in terms of science,” Ogilvy said. “He also is just as interested in my personal life … We’ve formed a relationship between the two of us where it’s not just like, he tells me what to do in the lab. It’s like we are working together, essentially.”

“He’s always telling me to try to find the answer on my own before I go for help to gain that skill … just because it’s such an important skill to have to be somewhat self-reliant,” Ogilvy said. “But that being said, he’s always there if I get stuck or if I need help.”

Sandhu found a place for himself in the Yang lab. In a few weeks, he plans on focusing more on his own projects.