BIPS: A Semester in Review 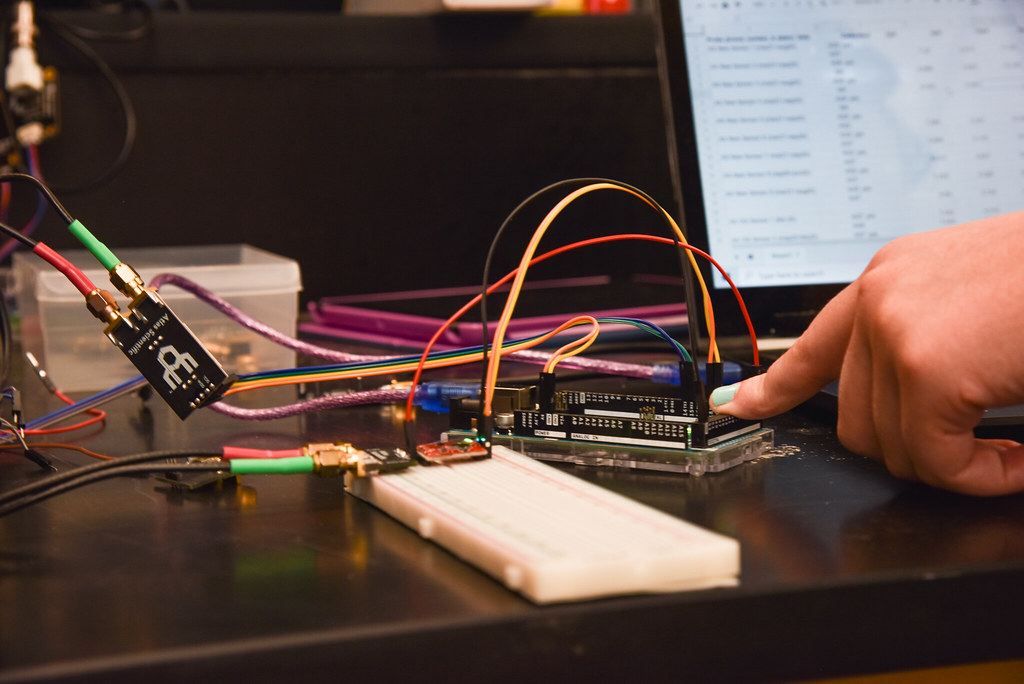 Maria Lusardi showing how she connects the pH sensors to the Arduino. | photo by Becca Wolf, Bond LSC

As the semester comes to an end, Bioinformatics in Plant Sciences (BIPS) close the school year with a lot of accomplishments: one team earned Best Abstract honors at the Mizzou Undergraduate Research Forum, three teams have papers in the review process, one team got their research published in a journal, and two BIPS members were even selected to share their work at the Research Day in Jefferson City, MO.

These teams did not get to these places on their own.

BIPS is in its 3rd year at Bond Life Sciences Center as an undergraduate program that pairs a plant sciences or biology student with a computer science or engineering student. Most students come in with little to no knowledge on the other’s major but are committed to work together on a project that requires both disciplines.

“I liked how I was able to work with Maria who has different experiences and knowledge than what I do and to be able to work together to create this cohesive project that we’ve been working on all semester. It’s been really rewarding,” Emily Walter said.

Walter, a plant sciences major, worked in the David Mendoza lab at Bond LSC this semester with Maria Lusardi, a computer sciences major.

They focused on using pH sensors with maize grown in a hydroponic system to track the acidification of the root environment when plants were grown with different nutrient availability. Lusardi first worked on tuning the remote pH sensors while Walter established the right hydroponic conditions for maize.

“I’ve been working with a lot of different things. I started out looking at Python [coding language] a lot and trying to get different Python scripts to work, but at the end I worked more with data analysis,” Lusardi said. “I tried to learn a new language so that I could make some applications that would make it easier for us to look at our data.”

They presented their research in Mizzou’s spring Undergraduate Research Forum. The forum was held online this year.

“The presentation talks mostly about the different brands of sensors we used and compared in the experiment and the different data sets,” Lusardi said. “It was more focused on the set up of the plants themselves.”

Walter and Lusardi received a Best Abstract award at the forum.

“It was really cool because I was watching the closing ceremonies and then they said our names. I was surprised, I wasn’t expecting to actually win and be a part of the top best abstracts,” Walter said.

Walter credits BIPS for helping her and Lusardi be comfortable presenting their research poster. The two presented in front of members of BIPS before the forum and received critiques.

“It was nice to know what to improve upon. It was also cool to see what other people were working on and learn about other projects,” Walter said. “I definitely expect to be doing similar stuff like this and hopefully will present live in the future.”

This success is the ultimate goal of BIPS.

“I think it’s very rewarding because you see them at the beginning when they have no idea what the project is,” Mendoza said. “At the beginning, they start by just following instructions, but, little by little, they start getting an understanding of what they are trying to do and start doing things by themselves.”

Mendoza was the principal investigator who initiated BIPS through a National Science Foundation grant.

“We now know the recipe for success, and we want to keep the program growing,” Mendoza said.

Both Walter and Lusardi have learned a lot about the other’s major.

“There are different knowledge and skill sets that you learn that you wouldn’t normally do on your own if you’re just a plant sciences or computer sciences major. It’s a good way to see how those interact to create something more,” Walter said.

Mendoza hopes that BIPS can keep this momentum going next year.

“In the end, the hope is that they learned that moving across fields is not impossible and that you can learn from a different field. You don’t have to be isolated in what you thought would be the rest of your career,” Mendoza said.