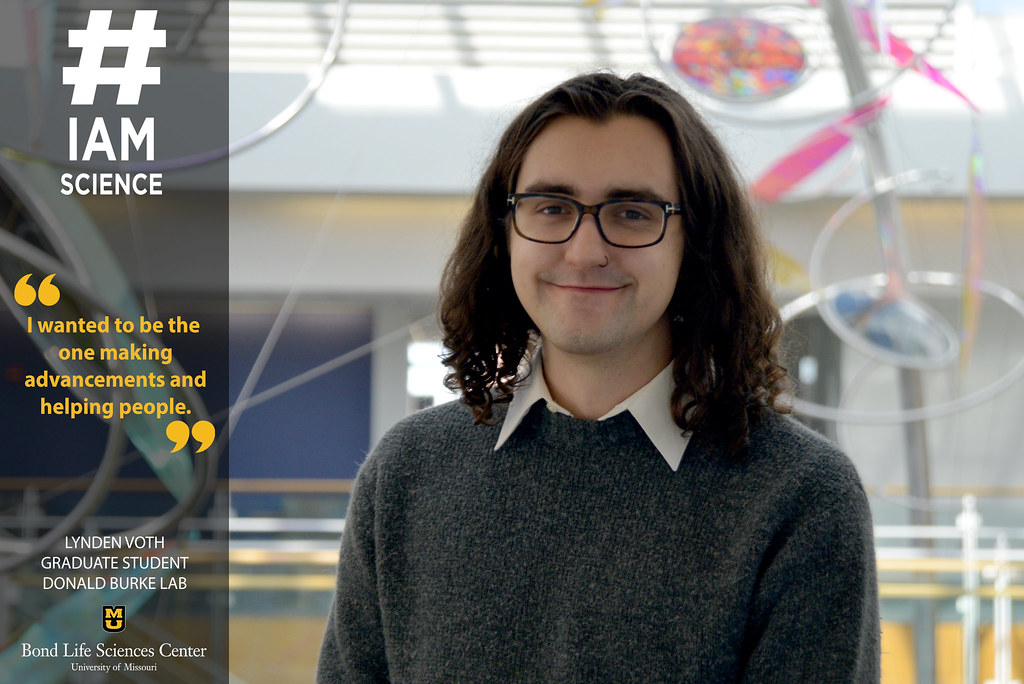 Invested in two to three hobbies at a time, Lynden Voth is not afraid to try something new. His flexible mindset – applied equally in his personal life and research – led Voth to discover his passion for molecular pathogenesis and therapeutics.

“I was kind of in a completely different headspace when I first came here, and then as I started to do some research and understand what the labs were working on, I ultimately found an interest that I was not aware of before,” Voth said.

Voth is a second-year graduate student in the Donald Burke lab at the Bond Life Sciences Center. Most of his work focuses on how cells make different proteins, a pivot from his undergraduate work in virology.

“I came in wanting to do viruses, and I ultimately chose [a lab] that was just completely out of left field that I had some interest in but was definitely not my top choice,” Voth said. “Then I got in and really found an interest and enjoyment of the kinds of questions and the kinds of things they were wanting to ask.”

As an undergraduate he studied coronaviruses in the Anthony Fehr lab at the University of Kansas. Transitioning into undergraduate research at the start of the pandemic, Voth experienced cutting-edge research from the start.

“We were in a period of understanding certain factors in coronaviruses that might be important for the immune system,” Voth said.

Growing up in the small town of Newton, Kansas, Voth’s interest in science began from a young age. The transition to college opened the world of research as he navigated opportunities at KU.

“Ever since I was a little kid, I really wanted to do something involved in medicine or science, but I think my interest in research science has really increased in the college years,” Voth said.

“It was definitely one of those things that came late in the game, and I’m glad that I was able to figure it out before it was too late,” Voth said.

When it came time to decide on a direction for his graduate studies, Voth leaned on support from Fehr while remaining open-minded about his field of study. Fehr encouraged Voth to seek out opportunities at MU and find a field of study he enjoyed.

“I really like to work on viruses, but I also just wanted to expand to see what was out there and test things out,” Voth said.

Once he came to MU and tried out new fields of research, he found interest in the Burke lab. Currently undecided on his thesis question, Voth works on several projects in the lab, but his research all focuses on diversity-generating retroelement systems – cellular processes that allow for diversity in protein production.

This process usually happens when viruses or bacteria are trying to create a protein that will allow it to infect a cell. With these systems, the virus or bacteria can create many different proteins to find which is most effective.

“For me personally it’s super cool to see how there’s this constant competition, and the mechanisms of that,” Voth said. “And it’s one of those things that is starting to be studied but there’s a lot of questions that are still available.”

Voth finds his schedule as a graduate student manageable, balancing his time between classes, experiments, reading and research.

“I personally really like that somewhat freedom where you can have a day where you just sit down and read a bunch of papers and then come in on the weekend and do an experiment for six to eight hours,” Voth said.

His other hobbies include playing instruments and learning new languages, and he often must fight the inclination to learn many subjects at once.

“I’m trying to focus on one [instrument] right now. There was a time I was trying to learn guitar and bass and what ever else, but [I’m] trying to just get more specifically good at one thing versus another,” Voth said.

His intention for learning new languages is personal with extended family living in Germany.

“I want to get a good solid base in German and then maybe look into other languages. Russian is also super interesting,” Voth said.

Voth educates himself when it comes to his hobbies, and in the lab he now teaches younger students the basics of research, but he attributes much of his success in the Burke lab to the people he learned from when he first started. His mentor from his initial rotation with the Burke lab, Jordyn Lucas, helped familiarize him with many new techniques.

“Her mentorship was super great for understanding how to not only learn things about the Burke lab, but also how to learn about … things in the future. If I go to a different lab, I can use some of the things she taught me to be able to understand techniques wherever I go,” Voth said.

Finding his passion through the rotation phase of his graduate studies, Voth encourages other students to seek out the best learning environments for them.

“I’m just really thankful for Mizzou and specifically for the Burke lab. I think it’s a great environment, and I would encourage anyone to rotate and find the environment that works for them,” Voth said.