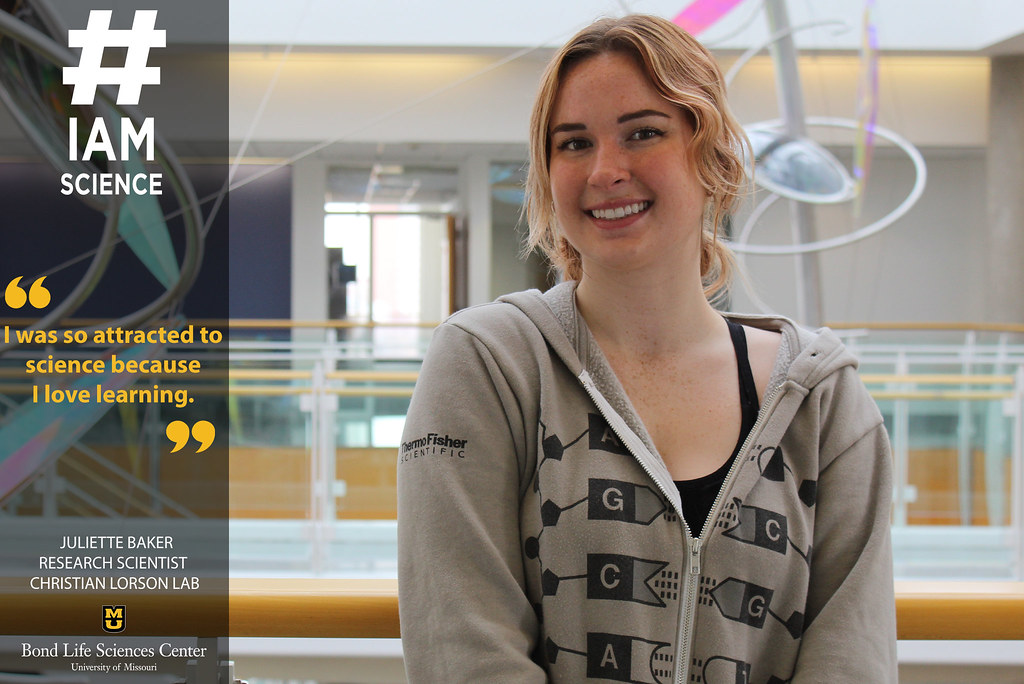 Science and art may feel like completely separate departments but for research scientist Juliette Baker, this couldn’t be further than the truth.

Her mom is a graphic designer and fueled her passion for art while Baker’s own love for science fused the two worlds together. She even drew a diagram for her master’s thesis on Amyotrophic Lateral Sclerosis (ALS).

“Honestly, people don’t think science and art overlap a ton,” Baker said. “But, I’m making tons of schematics for people to understand, and it’s all my artistic brain, really.”

At one point she considered becoming a science illustrator but views painting and art to be more of a de-stressor and hobby rather than a career path. When it comes to science, Baker wants to be more hands-on and focus on direct patient applicable research. However, her path wasn’t picture clear at the start of her academic career.

Baker — who now works at Bond LSC in the lab of Chris Lorson — earned a bachelor’s degree in health science at Mizzou, and planned on going to med school. She worked six months as a medical assistant but realized shortly after that this career path wasn’t for her.

“I love science but what I loved was the research part,” Baker said. “So, I did my masters in a year and a half instead of two years to get back on track.”

After she received her master’s degree in biomedical science last year, an opportunity arose to work at Bond LSC, and she couldn’t refuse.

Baker explained that she had to find three people to comprise a committee for her master’s program. This committee would approve and decide if she would receive her degree. Baker added a fourth person, Chris Lorson, since her research project for her master’s thesis was a collaboration with him and her mentor, Nicole Nichols.

Lorson, a principal investigator at Bond LSC, co-founded Shift Pharmaceuticals to focus on treatment for patients with spinal muscular atrophy (SMA), an inherited motor neuron disease. He was looking for a full-time researcher and Baker checked every box in the job description.

“They were looking for a full-time researcher and it was basically doing exactly what I learned to do my entire master’s so he thought it would be perfect if I could transition to working in his lab,” Baker said.

Baker primarily works for SHIFT but also helps with ongoing projects and aids other students in the Lorson lab.

“It was perfect because I was super worried about having to apply to jobs and figure out what I’m now qualified to do,” Baker said.

Currently, her research is on gene therapy treatments for patients with Charcot-Marie-Tooth disease (CMT). This inherited nerve disease causes abnormalities in the nerves in feet, hands, legs, and arms. She also helps with the SMA projects and SMARD1 project, a rare type of spinal muscular atrophy.

“Honestly this lab helped me realize that [gene therapy] is the kind of specialty that I want to stay in,” Baker said.

However, there is a stigma surrounding gene therapy and people are apprehensive when it comes to this type of treatment. One common misconception is that scientists are altering DNA or changing body composition, which Baker explains isn’t the case.

“What we are trying to do is to modify the production of the gene so it will go back to normal levels,” Baker said. “So, it’s not making the gene any different or adding a new gene that wasn’t there before, we are just modifying how your body is producing [the gene].”

Baker hopes the stigma surrounding gene therapy decreases over time as more people use it for different diseases, and it’ll become more accessible. The more attention this type of therapy receives, the cheaper it will become for people in the future.

“That’s the biggest thing that I hate about my job is that, yes, this treatment is going to be amazing and lifesaving, but it’s going to be expensive,” she said.

She plans on going back to school and getting her Ph.D. and one day working in the pharmaceutical industry. But for now, she enjoys working with Lorson and other undergraduates in the lab.

“The most rewarding part is definitely getting to see how my work and everything I do every day directly affects people with the diseases,” Baker said.