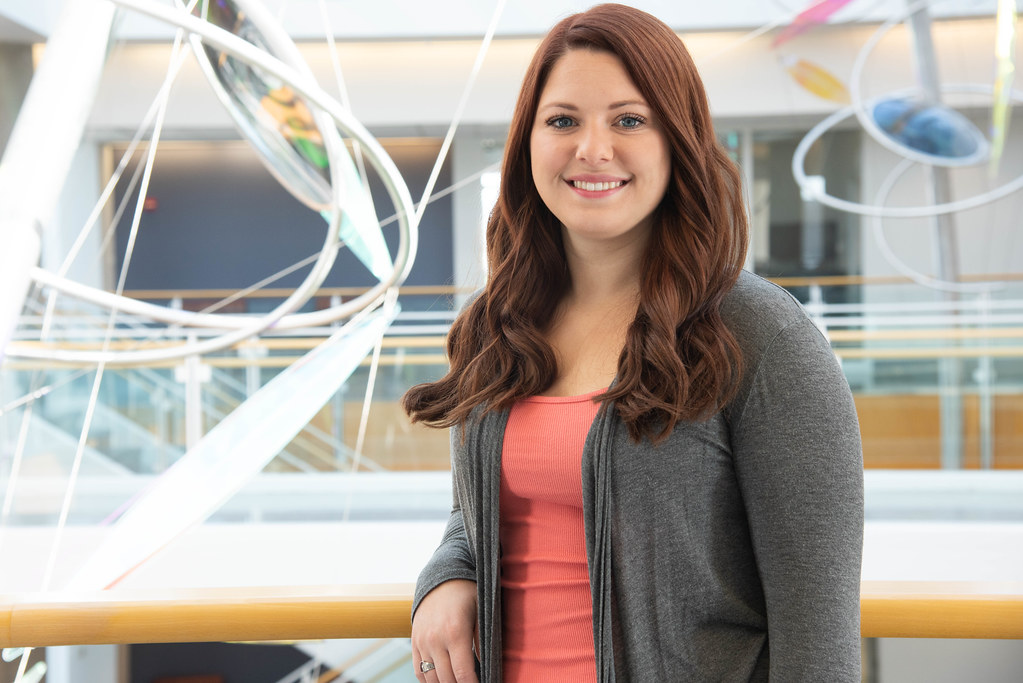 When given an opportunity to use the newest technology, one has to take it.

Ashley Meyer, the lab supervisor of the Wes Warren lab at Bond Life Sciences Center, recently started using the improved technology of single cell RNA sequencing to create an Immune Cell Atlas for chickens. This search browser of sorts allows people to search for cells and gene expression in chickens.

“It would be a platform for researchers to have a baseline of what should be normal, and then be able to run comparative experiments to say ‘Okay, if we challenge this chicken with this disease, what biological response are we seeing?’ Which can help you then understand the disease better,” Meyer said.  “Like, ‘How is it being transmitted? How is this chicken reacting to it?’”

Poultry is one of the largest agricultural industries in Missouri, so it is important to keep chickens healthy.

“The Immune Cell Atlas will help us analyze tissues and will help us perform the single cell RNA sequencing on them to ask what’s normal and what’s diseased so that we can see what’s happening,” Meyer said. “It will also allow us to see which chickens are more susceptible than others or how the progression diseases happen.”

Meyer and the Warren lab are some of the first researchers to apply this technology to chicken based research.

Single cell RNA sequencing (RNAseq) allows Meyer to sequence the RNA of an individual cell which provides in-depth data. This can be done using single cell RNAseq which uses the entire cell, or it can be done using single nuclei RNAseq which uses just the nucleus of a cell. This profiles gene expression in cells that make up a tissue to get data on a cellular level to understand the composition of cells.

It is important to target the RNA because it is the messenger that brings instructions from the DNA for controlling the synthesis of proteins. RNA is commonly synthesized in the nucleus of a cell.

“We’re some of the first people to get our hands on some avian single cell data, specifically looking at nuclei. My job is a lot of optimizing these protocols to isolate these nuclei,” Meyer said.

Using nuclei allows Meyer to use samples that have been frozen, collected in other locations, etc., which provides more flexibility.

Isolating the nuclei through RNAseq allows Meyer to identify different cell types based on genes being expressed in a cell in an organ such as a spleen or lung. This information can then be added to the Immune Cell Atlas.

While the team is working from around the country, they are all connected by a common goal.

“Things have been pretty hectic, the break with the COVID quarantine kind of paused everything and then when we got back it just kind of took off, we’ve generated a couple data sets just in the last month or so,” Meyer said.

Having started this research about six months ago, they still have a way to go. Meyer and her collaborators are currently focused on analyzing five to six immune system organs, and plan on expanding in the future.

Since single cell RNAseq is so new, it can be challenging being one of the first labs to use it at MU and in the avian community.

“Since it’s still newer, everyone’s still figuring out how it works,” Meyer said. “Everybody’s determining their own way of analyzing the data. We’re working through the hiccups of everything, and not having years and years of research to guide us can be challenging; however, also exciting because then we can find what works and what doesn’t work which is the whole point of science.”

While challenging, it is rewarding. Meyer hopes that in the future once they have created the chicken Immune Cell Atlas, they are able to expand to other animals.

With his wide range of teas laid out along the windowsill, and his small posters still in stacks on the floor, Mel Oliver is still setting up his new office at Bond LSC after arriving in December.

It takes a while to settle into a new space like the office on the south side of Bond LSC’s third floor, especially after spending 30 years in a job like the one he held with the US Department of Agriculture until he retired late last year. On most days, he types away at his computer writing his papers and sits back to think whilst playing with his wedding ring, but even with 40 years of discovery under his belt, Oliver isn’t quite done with his search for answers.

Oliver grew up just north of London — which you can hear in his lingering accent — and received his undergraduate degree from the University of East London. After he earned his master’s and Ph.D. in Calgary Alberta, Canada, he came to St. Louis to work with a top plant molecular biologist. He met his wife of 34 years in St. Louis and after living in New Mexico and Texas, he returned to Missouri.

Oliver was a graduate student in Calgary when he found his calling in plant sciences.

“I was interested in all sorts of different things in plants, and the Ph.D. supervisor I started working for put a piece of [dried] moss in my hand and squirted water on it, and it [came back to life].” Oliver said. “I was hooked.”

Oliver gained an interest in desiccation tolerance — the ability of certain plants to dry completely and then fully recover once water was introduced again.

At a meeting in California, Oliver’s Ph.D. supervisor was talking and kept mentioning Oliver’s work in desiccation tolerance. At that same meeting, there were United States Department of Agriculture recruiters looking for a molecular scientist who understood plant stress.

At 39 years old, Oliver was recruited by USDA and has worked for them for the past 30 years.

“It was good to work for them, but it’s a different thing than university in the sense that we have a more practical leaning than does a university researcher,” Oliver said. “So, you’re trying to work towards a more agricultural goal to improve U.S. farming, whereas here you’re interested in that, but you’re also more focused on scientific questions and that’s the difference.”

Even though Oliver retired from the USDA on Nov. 30, he still has two grants that he’s working on — one with a group of MU researchers led by Robert Sharp and is collaborating with Bond LSC researcher Ruthie Angelovici — so moving into Bond LSC seemed like a logical next step.

“I didn’t want to stay where I was in Curtis [Hall] because then I’m so close to where I’ve been for the last 15 years,” Oliver said. “I didn’t feel like there’s been any change.”

One of his grants focuses on plant metabolomics and the effect of drought on nodal root growth in maize, where he collaborates with Robert Sharp, director of MU’s Interdisciplinary Plant Group. The other grant, Oliver’s self-proclaimed “claim to fame,” is on desiccation tolerance and is part of a large multidisciplinary effort. He has been also working with Angelovici on aspects of desiccation tolerance in grasses.

For the past 40 years, Oliver has been trying to figure out how these “resurrection plants” can be completely drained of water and then come back to life. This pursuit of knowledge has all been in an effort to figure out how people can make plants more tolerant of drought.

“We now understand a lot more about how resurrection plants work. So, we have a much better understanding of how these plants deal with desiccation on a metabolic level,” Oliver said. “I’ve been involved in sequencing many genomes of resurrection plants as well as the mosses and that’s given us insights that we’ve never had before.”

In his research, Oliver studies these plants through their genomes and gene expression.

“I think the thing we’ve confirmed more than anything — the ability to survive drying is a very ancient trait,” Oliver said. “There’s no real evidence for it, but genomes are indicating that it’s probably the origin of land plants depended on desiccation tolerance.”

As part of the plant sciences division, Walter Gassmann — interim director for Bond LSC — worked with Oliver in coordinating the 2015 IPG symposium at Bond LSC.

“I think his work is really fascinating,” said Gassmann. “He doesn’t limit himself to the easy things. Some of these plants are not standard experimental systems, so you have to build techniques and learn how to work with them, so he’s been very pioneering in his work.”

After these two grants are finished, Oliver will officially retire and put up his lab coat.

“I don’t think any scientist is ever ready to leave it…” Oliver said. “You have to hope what you’ve written and what you’ve said in meetings has inspired someone younger to go that route. And there are! Our field, in the last 10 years, has boomed in the number of people getting into looking at resurrection plants because of the impact of global warming. Everybody’s interested in how plants that survive in very extreme environments can survive and how do they do that and what can we learn from that? That’s what drove me and that’s what’s driving young people now.”

“#IAmScience because I plan to use my career to help develop agricultural innovations for the hard-working farmer.”

Most of Shannon King’s support system – her friends, grandparents, and boyfriend – are all farmers. They’re her inspiration and part of the reason her career goal is to use science to help farmers.

“I went into science because I wanted to help farmers,” King said. “With this grant, I get to go out into the field every day and be a ‘fake farmer,’ as I call it. And then I get to go into the lab and look at the science of it all. This grant gives me an everyday reminder of whom I get to help with my research and a whole new appreciation for science.”

The official name of the project is “Physiological Genomics of Maize Nodal Root Growth under Drought.” Its goal is to develop drought-tolerant corn varieties that make efficient use of available water. The project is interdisciplinary in nature and includes individuals from MU’s College of Arts and Science, School of Medicine, College of Agriculture, Food and Natural Resources, and School of Journalism. King said part of the fun of this grant is working with her team when things go wrong.

“None of us are engineers, but we’ve been doing a lot of re-engineering of our system to make things run smoothly. It’s rewarding to have all of us come together and try and make this project work.”