Expert Comment: How science made the “three-person” baby possible

By Jennifer Lu | Bond LSC
A new in-vitro fertilization technique that uses genetic material from three persons made the news last week following the announcement of the successful birth of a now five-month-old baby boy. The process allowed the mother, who had a rare mitochondrial disease known as Leigh Syndrome, to have a child without passing her faulty mitochondrial genes.  The nucleus from the mother’s egg was inserted into a prepared donor egg that had healthy mitochondria to make a cybrid, or cytoplasmic hybrid, egg that was then fertilized.

We asked Mark Hannink, Bond LSC scientist and professor of biochemistry, who studies oxidative stress in mitochondria, what this all means.

This is not the first “three-person” baby. Why is this technique new?

It’s another way of getting a healthy mitochondrial genome into the baby.

Wait, so we have two types of DNA in our cells?

Way way early in evolution, a bacteria got together with a cell that had a nucleus, and they decided to cooperate. Over time, many of the genes that were originally in that bacteria’s genome moved to the nuclear genome. But some of them haven’t. The mitochondrial genome in humans has some 37 genes. But the mitochondria itself has about 1000 different proteins so those other proteins are encoded by the nuclear genome. Together, those proteins work together to form healthy mitochondria that, among other important jobs, provide energy for the cell.

What makes this procedure controversial?

Any time you manipulate the sperm and the egg, there is a chance that you will generate subtle alterations which result in defects in the child during development or after it’s born. Even in vitro fertilization, which has been shown to be effective and works, has a higher rate of diseases associated with it.

Now you’re doing a whole set of complicated manipulations before you get to IVF….You take out the existing nucleus from the donor. You put in the nuclear genome from the mother. And you hope that it all comes back together and then you do the IVF…. Any time you do a manipulation like that, you may cause subtle mistakes that you’re not aware of. 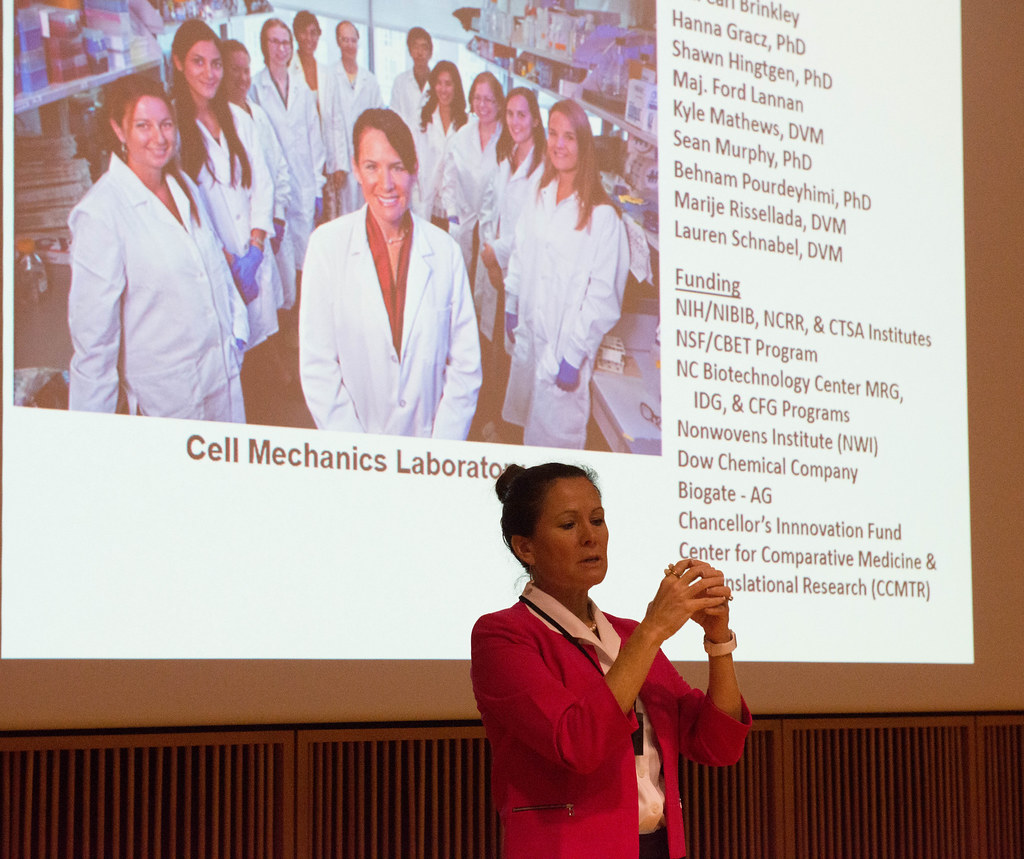 This past weekend not only ushered in Mizzou’s first home game of the season, but the return of Saturday Morning Science. The weekly lecture series connects the Columbia community with MU scientists and their research, from bio-engineering to volcanology to anthropology and linguistics.

Elizabeth G. Loboa, dean of the College of Engineering, kicked off the semester with her talk on tissue engineering in the age of drug-resistant bacteria.

Tissue engineering is about turning cells into tissues and organs, for example, fat-derived stem cells into muscle, bone and cartilage. The tissues take shape on tiny scaffolds that are bio-compatible and biodegradable.

The Loboa lab does this, but they’ve added an extra layer to their research: Loboa’s scaffolds also act as pipelines that deliver wound-healing and anti-bacterial compounds to cells as they grow into tissue. The idea is to reduce infection, inflammation and scarring as the wound heals.

“We’re trying to kill these bacteria while helping these stem cells become the cells we want to create,” Loboa said, about her research at the University of North Carolina-Chapel Hill and North Carolina State University.

Using a process called electrospinning, Loboa’s group makes scaffolds shaped like porous fibers, sheaths, or hollow sheaths. Depending on their structure, these scaffolds act like faucet taps that control the rate and timing at which anti-bacterial compounds are released.

“I look at our fibers as delivery platforms,” Loboa said.

10/1: Steve Keller, Associate Professor of Chemistry, “The 20 Greatest Hits in Science…In an Hour”

10/8: Manuel Leal, Associate Professor of Biological Sciences, “Are Lizards Smarter Than Those Who Study them?”

10/15: Stephan Kanne: Executive Director and Associate Professor, Thompson Center for Autism & Neurodevelopmental Disorders, “What Do We Look For When We Diagnose Autism?”

10/29: Libby Cowgill, Assistant Professor Anthropology, “Fitness for the Ages: How to Lift Like a Neanderthal?”

11/12: Frank Schmidt and Gavin Conant, Professor of Biochemistry (Schmidt); Associate Professor of Bioinformatics, Department of Animal Science (Conant), “Networks in Biology and Beyond”

12/3: Elizabeth King, Assistant Professor, Division of Biological Sciences, “What’s the Best Way to Divide up the Pie: The Price of Long Life”

“You’ve probably never really seen a fat plant before, right?” said Salie, a fourth year MU graduate student in biochemistry­. “Humans, we make plenty of extra fat and store that as energy. But plants don’t really need to do that — they make just as much as they need, and that’s about it.”

The Thelen lab looks for ways to increase the amount of vegetable oil that crops such as corn and soybean can produce. Salie focused on an enzyme that is the first step in the pathway to producing fatty acid in plants.

The idea was that if he could reduce metabolic limits at the beginning of the process, then the downstream production of oil would increase.

“I found these new proteins that no one has ever really studied before,” Salie said. “As I started to look into them over the last year or two, it turns out that they actually seem to incorporate themselves into the enzyme and slow down it’s activity.”

Four separate proteins normally combine to form the functional enzyme, but the new proteins Salie identified mimic those components and can take their place, like a cuckoo bird replacing another species’ eggs with its own. The more mimics that replace proteins, the fewer functional enzymes the plant produces, which means less oil.

It’s a simple, nuanced way for the plant to fine-tune the production of fatty acids.

“Instead of being an on-off switch, it’s more like a thermostat,” Salie said. And if he can adjust that thermostat in a plant, it should start packing on the pounds.

Although Salies work was only recently submitted for publication, it’s already receiving recognition. His poster, “The BADC proteins — a novel paradigm for regulation of de novo fatty acid synthesis in plants,” won first place in the Molecular and Cellular Biology category during the Life Sciences Week poster competition in April.

Salie relished the opportunity to share his findings with researchers and non-scientists alike.

“It’s a great experience, because it helps you realize what’s really important about the work that your doing,” he said. “It also really encourages you to work harder. It’s like, ‘Wow, this is actually meaningful stuff!’ which can be hard to see when you’re working 60 or 70 hour weeks at the lab, just sitting there by yourself.”

Salie was among more than 300 students who presented their research during the 31st annual Life Sciences Week poster sessions.

The winners in each of the five categories are:

For photos of some of this year’s winner, check out this Flickr album

The difference between walking and being paralyzed could be as simple as turning a light switch on and off, a culmination of years of research shows.

Waters’ work with gene expression in embryonic mouse tissue could shed light on paralysis and stroke and other disorders of the central nervous system, like Alzheimer’s disease.

Waters works extensively with two coding genes called “Gbx1” and “Gbx2”. These genes — exist in the body with approximately 20,000 other protein-coding genes — are essential for development in the central nervous system.

Coding genes essentially assign functions for the body. They tell your fingernail to grow a certain way, help develop motor control responsible for chewing and, as shown in Waters’ research, help your legs work with your spinal cord to facilitate movement.

Waters and his researchers, including graduate student Desiré Buckley, investigated the function of the Gbx1 by deactivating it in mouse embryos and observing their development over a 18.5-day gestation period — the time it takes a mouse to form.

The technology could eventually contribute to developing gene therapies for paralysis that happens at birth or from a direct result of blunt trauma, like a car accident.

“Understanding what allows us to walk normally and have motor control, allows us to have better insight for developing strategies for repairing neural circuits and therapies,” Waters said.

Technology for isolating genes and their functions

Genes can be isolated, then inactivated throughout embryonic tissue. Many of Waters’s studies inactivate genes to harness a better understanding of which genes are responsible for what.

“The relevance of it to the well-being of humans, is apparently relevant to development and more importantly to the development of the central nervous system,” Waters said. “Now it’s taking me to the point where we’re getting a bird’s eye view of what’s actually regulating our ability to have locomotive control.”

No Gbx1, no regular locomotion

Mice that Waters uses in his lab, “display a gross locomotive defect that specifically affects hind-limb gait,” according to their article published in Plos One, February, 2013.

In contrast to its family member Gbx2, when Gbx1 is inactivated, Waters concluded, the anterior hindbrain and cerebellum appear to develop normally. But neural circuit development in the spinal cord —- what allows us to walk normally —- is compromised, he said. According to an article published by

Waters, November 2013, in Methods in Molecular Biology, this occurs despite an increase in the expression level of its  family member, Gbx2, in the spinal cord.

A video recording from the research, which was funded by the National Science Foundation and start-up funds from MU, show the mouse with the Gbx1 held back, with an abnormal hind-limb-gait.

Mice with this inactivated gene were otherwise normal, Waters said.

“If they were sitting there without moving, you wouldn’t know anything was wrong with them,” Waters said.” They’re able to mate, eat and appear to function normally.”

No Gbx2, no jaw mobility

When Gbx2 function is impaired in the mouse, Waters observed that development of the anterior hindbrain, including the cerebellum, a region of the brain that plays an important role in motor control, didn’t form correctly.

The mice, as a result, cannot suckle, so they die at birth, Waters said.

“We’re getting a better insight into the requirements for suckling —   another motor function required for our survival,” Waters said.

The research has paved the way for investigating other coding genes and their responsibilities and roles in development, Waters said.

“We have a lot to do still,” Waters said. “So, why am I so excited about it? That’s part of the reason.”